How does the Dutch system for preferential votes (*voorkeursstemmen*) work?

In parliamentary elections in The Netherlands, voters can vote for a party and preferentially for a specific candidate. How does this preferential voting work? 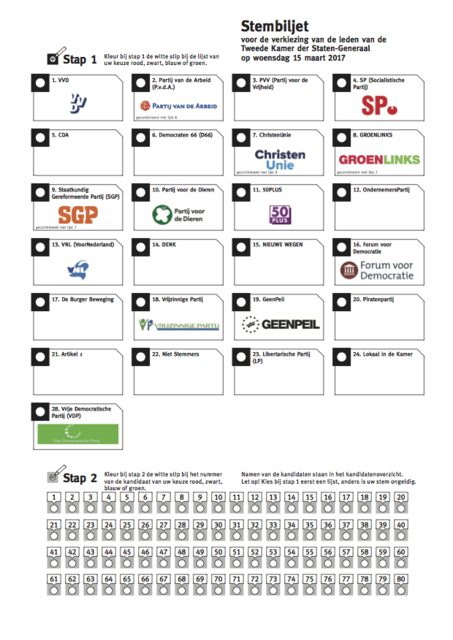 Translation of the ballot paper (Stembiljet):

Ballot paper for the election of members of the Second Chamber of the States-General on Wednesday 15 March 2017.

Step 1: in step one, colour the white circle for the list of your choice red, black, blue, or green.

Step 2: Colour at step two the white dot at the number of the candidate of your choice red, black, blue, or green.

Names of candidates are listed in the candidate overview.
Be careful: first choose a list in step 1 or your vote will be invalid.

As specified by the Kieswet, the law governing elections, any registered party can deliver a list of candidates (see this question for details) in each district (kieskring)¹.

When people cast their vote, they vote for:

In the example ballot, candidates are not explicitly named; in the Dutch general election 2017, district 's Gravenhage, there are a record total of 881 candidates. This ballot design is new; previously and for elections with less candidates, all candidates were/are explicitly named on the ballot paper.

If a list receives enough votes to have at least one elected candidate, the law specifies that seats are assigned as follows:

On average, this tends to happen for some 1–2 candidates at each general election.

¹There is no requirements for a person to live in the district where they are a candidate, and it is permitted to be a candidate in more than one district. In practice, most parties deliver lists that are mostly or entirely identical between districts.

²The electoral threshold in The Netherlands is equal the number of votes required for one seat. In general elections, for the national parliament with 150 seats, this is 1/150th of the number of valid votes cast.

Not the answer you're looking for? Browse other questions tagged election netherlands .

3
For the Dutch general election, how many candidates can be on a list?

5
How does the Cuban system for municipal elections work?
6
What analogues exist for the Dutch Centraal Planbureau outside The Netherlands, if any?
9
How does France's electoral system work
2
How does NOS determine invitees for electoral debates?
3
For the Dutch general election, how many candidates can be on a list?
10
Why do some parties but not others have logos in the new Dutch ballot paper (stembiljet)?
8
What happens when a Dutch party wins more seats than they have candidates listed for?
3
Why does the Dutch PVV oppose spending on innovation?
2
Does Pete Hoekstra, the US Ambassador to the Netherlands, speak Dutch?
7
How does the German Bundestag election system work?