What is the largest number of parties that ever entered a parliament in a general election?

In the opinion polls for the upcoming election, 14 parties are deemed to have a good chance to enter parliament.

In the German federal election, 1930, 15 parties entered parliament. No recent German election comes close because in post-war (West) Germany, because a 5% electoral threshold makes it much harder for small parties to enter (which was partly motivated by the Weimar Republic polarisation that contributed to the political stalemate in which Hitler rose to power).

What is the largest number of parties that ever entered a national parliament in a general election?

The theoretical limit to your question is the number of seats within the Parliament. You can find this list here. Although China has the largest number of members; the Legislature is cemented under one party. The European Parliament numbers are skewed because the parties form ideological groups. India is, possibly, the most fragmented legislature in the world.

Thank you to SJuan76 for prompting me about the Middle East. Elections are often marred by multiple parties, multiple 'blocs' and multiple affiliations, denominations and faiths which have protected seats. For instance the Iraq Election of 2014 has arguably 40 'parties' but whether they are defined at political parties in the generally accepted sense is up for discussion. For instance; is the Unity of the Iraqis (Wahdat Abnaa al-Iraq) the party or is that party comprised of the following parties;

You are looking for the 2014 election in India. 35 parties with 1 seat or more were elected. 38 if you count the 3 independents as a party each.

About 15,000 candidates from 500 political parties compete for 543 seats in the Lok Sabha, or lower house of Parliament.

You can read a documented account in this article.

Parliamentary elections in India are held every five years, unless the government is dissolved before that. With 1.2 billion people in India, it requires 800,000 polling stations, multiple phases, and a period of weeks to declare the winner. 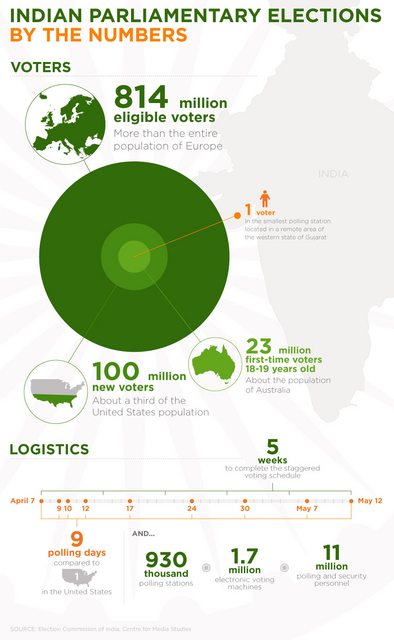 According to the Election Commission of India, 814.5 million people were eligible to vote, with an increase of 100 million voters since the last general election in 2009, making it the largest-ever election in the world. Around 23.1 million or 2.7% of the total eligible voters were aged 18–19 years. A total of 8,251 candidates contested for the 543 Lok Sabha seats. The average election turnout over all nine phases was around 66.38%, the highest ever in the history of Indian general elections.

You can find an abridged table of the parties involved here.

Currently 27 parties have representants in the National Congress of Brazil.

The lower house, called the Chamber of Deputies, has 513 members with the largest party having only 65 seats, or less than 13%.

Up to sixteen parties got a seat in Italy Parliament after the 2006 election, and reviewing past elections it seems that it is usual to have at least 12 different political parties in the parliament.

That said, it seems that most of these parties are usually aggregated into 2 or 3 formal major alliances. The advantages of formalizing these alliances are unknown to me (each party has its own voting percentaje, so it means that they do not competed as a single list for alliance).

As a side note, some countries have Parliamentary systems but do not allow for official political parties (e.g. Kuwait), so maybe you could count as many "parties" as elected MP (50 in Kuwait).

In the USA there is a common misconception that there are two parties but actually there are separate parties in each state which are combined in some form of a loose federation. So in the Congress there are many more than two parties as is evident in the votes.

19
What was the largest popular vote election ever held?
15
Has there ever been a situation in a modern Westminster parliament where there have been more independents than members of the second largest party?
5
Are there any countries that require political parties to be democratically organised (and accept members)?
2
How does NOS determine invitees for electoral debates?
20
Has a party that won an election ever lost its leader in the process?
2
Can a Prime Minister be appointed if they do not have a seat in the Parliament?
6
Can a UK general election be delayed after Parliament is dissolved?
3
What is the largest election to use non-secret ballots?