Game theory: ignorant voting, when to pass, when to guess?

Suppose one is voting to decide some political proposal or elect some office, and there's not enough information, (or the information is contrary), to make a confident decision. Perhaps the proposal is a law that's hundreds of pages of dense text, and there's not enough time to read it. Perhaps the candidates are untrustworthy, but one might be worse, yet even that's unclear.

Some readers may wonder how guesses could possibly be worthwhile. I'd compare it to a wire dilemma, where doing nothing is as bad as cutting the wrong wire -- in which case a guess always offers better odds than doing nothing. Or like in Jan-ken where an expert player can trounce a beginner, but not if the beginner moves randomly. In roguish political contests voters may be expertly read by campaigners who stay several steps ahead, so that (as with Jan-ken) the voters' own strategies and biases will be employed against them, but making no choice leaves the choice to other outmaneuvered voters.

The voter would only want to vote when they are the marginal voter. If they don't know when they are the marginal voter, their optimum strategy is to vote in their first election, and then vote based on the turnout in the last election. If either candidate wins by a comfortable margin, there is no reason to vote (their vote wouldn't have mattered). Otherwise their vote may change the outcome. If they are uncertain about the payoffs from any particular candidate, they will need to learn over time by voting and observing how well various candidates do for them.

What does our theoretical voter's utility look like? The graph below shows how their utility changes based on the percentage of voters who vote for their position (for example, when X=0.05 the voter's candidate received 5% of the vote in an election). 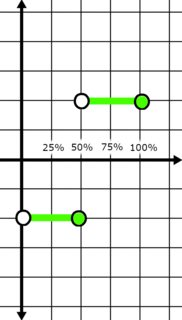 It's a basic step-wise function. When their candidate receives less than half of the total votes, the voter receives a negative utility (the green line below is below the y-axis). When their candidate wins the election, they receive a positive utility. The amount of the utility does not increase based on exactly what share of votes are received: 50%+1 is just as good as 100%. I'm pretty ambivalent about what happens at exactly at 50%, but for the chart I called that a loss (50%+1 is required to win).

Under this function, it should be clear that the voter will want to make sure they receive the positive utility and not the negative utility. So how do they do that?

A marginal utility function describes the increase in utility from a certain action. The chart below shows how each additional percentage of votes received increases our voter's utility: 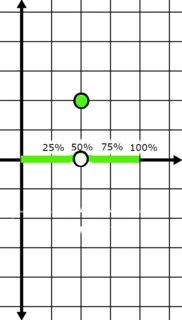 What does all that mean? Our voter should only vote when they are the marginal voter. That is, when their vote would break a tie in favor of their candidate.

At this point it's worth noting that since our voter is unregistered, there is actually a cost (disutility) to voting: they have to register to vote. They might incur other costs like becoming informed about issues, locating their polling place, meeting party members, etc. Since the cost is a simple constant, it just decrease the utility by some set amount every election.

Elections will happen with some frequency. Although in any one election our voter should only vote when they are the marginal voter, they really wish to maximize their returns over a long period of time (not just win a single election). How does this change things?

Although game theory would assume that our voter knows exactly when they are the marginal voter, in practice no one would ever know this. The voter would vote or not vote in a given election, and then observe what voter turnout and election results accrue. If their either side wins by a land-slide, they probably don't need to vote next time (their vote wouldn't have changed anything). If the election is reasonably close, the voter may decide to vote in the next election. How close is "reasonably close" will depend on the voter's risk tolerance (how much uncertainty are they comfortable with?).

What's the best strategy? Political scientist Robert Axelrod discussed this in his famous book, The Evolution of Cooperation. Axelrod hosted a large iterated prisoner's dilemma tournament where people could submit different strategies. The winner was tit-for-tat: the voter should vote in their first election. From their choices are based on the last round of voting. If their side did not win by a comfortable margin in the last election, they will show up to vote in this election. Otherwise, they will stay home.

This is another big deviation from normal game theory: typically we would assume that the voter has an unbiased and complete knowledge of everything in the game.

This is taking us outside of game theory, but over multiple elections the voter will learn to associate some characteristics of the candidate with the utility they gain. Perhaps instead of a static value the voter has some idea of the distribution of potential benefits, which they update after each election (as in a bayesian game).

Without this prior information, the voter would have no way to discern

Indigochild's answer supposes the uninformed voter is interested in "winning", i.e. his chosen candidate or proposal wins, and does things that benefit the voter.

This answer is an attempt to sketch some options of uninformed voters who don't so much care about personal benefits, (let's suppose they'll sturdily endure most any ensuing political weather), but who are nevertheless interested in what's best for the nation.

Not the answer you're looking for? Browse other questions tagged voting political-theory policy game-theory .

5
How to apply game theory?
18
Why do working class people vote for the political right?
25
Is candidate anonymity at all practical?
2
Do any countries practice a system of proportional funding/budgeting that combines everyone's funding choices?
30
Why are candidates expected to win their home state?
7
Is there any correlation between the effective number of political parties and democratic participation?
2
Searching for more details regarding a particular story of applied game theory in foreign policy
15
How will New York City physically implement the ranked choice voting algorithm with thousands of unique mayoral votings possible?
4
What do people mean by "political alienation" when they cite it as the cause of extremist ideologies?