Is there a theory discussing fines based on income?

The question is quite straightforward, as in the title.

I found myself discussing with a colleague the fact that according to some, fines should not be an absolute amount (e.g. 50 USD/EUR) but rather a percentage of the monthly income of the fined person (e.g. 1%).

The rationale brought forward is that such a system would be neutral, while the current one favours high income people, as they, feeling less affected by fines, are less inhibited by them.

Is there a proper political theory discussing the benefits and drawbacks of such an idea? Possibly also taking into account socio-economic considerations.

I think you might be looking for the idea of diminishing marginal utility. This is an idea from economics that says as we get more of something, each new item gives us less happiness. This is a very fundamental idea in economics and makes intuitive sense. If you don't have any pizza the first slice of pizza you get will make you really happy/full. The seventh slice of pizza you get, you probably can't eat anyways and so it isn't that useful to you. This principle applies to money as well. A billionaire is much less upset to have to pay a $700 fine than someone who is even out of credit and has to sell his car to pay the fine. 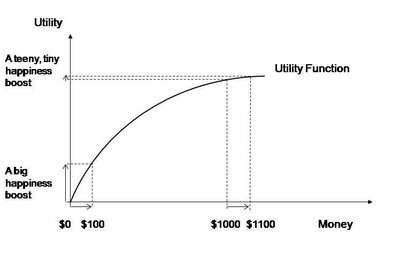 Economics, however, is a positive discipline, focusing on 'what is' as opposed to a normative one focusing on what 'ought to be.' It defines utility, a simple proxy for happiness/wants/needs, and can analyze how policies might effect utility, but doesn't tell us if those policies are good or bad. There is, however, a political/philosophical idea that emphasizes maximizing utility, utilitarianism. Utilitarianism can be taken in many forms and degrees, from a full fledged, materialistic, only material consequences matter, kind of philosophy to a more moderated, let's look at how this policy effects people's happiness and factor that into our broader framework for justice. In your case one could make a utilitarian argument that fines should be equal, not in terms of money, but in terms of utility, since utility is what really matters. That means understanding how much each dollar means to each person in terms of utility. That's not really knowable, but as a step in that direction, a utilitarian would argue that charging fines based on one's income or wealth is much better than just having a flat rate. This is one of the major arguments for a progressive income tax as well.

This idea actually is partly realized in the German law where fines or penalties for felonies are expressed as multiples of "Tagessätze" (daily available income). For misdemeanors the situation is mixed; the law prescribes to "take the economic situation of the defendant into account in the case of higher fines" (OWiG Par. 17.3).

The idea to make all fines income dependent has been discussed; I remember the counter-argument that it is not the objective of the political and judicial system to make everybody perfectly equal. The political system in Germany acknowledges and respects private property, and by implication different amounts of it; i.e. the existence of rich people is implicit in a meaningful concept of private property.

In short: Being rich means being privileged; being able to just shrug and pay their parking ticket is part of those privileges.

Another counter-argument is the necessary effort. Running a light as a pedestrian or similar lesser infractions are usually pursued by a form letter and minimal administrative overhead (to the degree this oxymoron is realizable). Laying your available income open amounts to producing evidence for rent, loans, child support etc. which must be checked in order to be effective. For petty penalties the result seems not worth the effort.

The UK has a similar system, at least for the lowest level courts (magistrates' courts), based on weekly income, It's more a practical set of rules than a "theory", though (source).

Offences are categorized into 6 "bands," with the mid-range of the fines for each band varying between 0.5 times and 6 times weekly income.

As the other answer said about the German system, this is not used for fixed penalty offences (e.g. minor speeding offences), but the accused always has the option to put such offences before a court instead of paying the fixed penalty. In most instances, taking a straightforward fixed penalty offence to court would be likely to incur a higher fine, since the fine would reflect the higher costs involved and/or the cost of legal representation for the accused.

The OP's question is part of the wider issue of choosing the most appropriate sentence for an a particular offender, for example imprisonment, a fine, some form of community service, or a combination of those options.

A rich person may find a number of hours of compulsory community work, spread over several weeks or weekends, a more severe punishment than a fine that can easily be paid and forgotten about.

One problem with such system is how to determine what a person's income is. There are many cases where rich people have little to no official income (because of using both legal and illegal loopholes). So you could easily get in the case where the company's owner pays less fine than his secretary.

Not the answer you're looking for? Browse other questions tagged political-theory .

24
How accurate is the horseshoe theory?
10
Lumpenproletariat In Marxist Theory?
4
Selectorate Theory: What flaws or critics?
7
Is there a political theory of running state without politicians?
2
In social contract theory, is there anything which may not be included in an agreement?
4
Is there a generalized theory on why nation states become democracies or autocracies?
5
Is Chinese Communism with market economy based on any Marxist theory?
37
What is an alternative theory to the Paradox of Tolerance?