What share of federal taxes do the rich pay?

It is a commonly held belief that upper-income people pay too little in federal taxes, or that they pay no income taxes at all. An AP story noted a Pew Research poll that found:

What share of all federal taxes are paid by the top income quintile? (top 1%?)

How many households pay no federal income taxes? (how many of those earn +$200k)

The rich pay the vast majority of all federal taxes

This data matches the Congressional Budgets Offices estimates for 2009. The Table 2 (page 12) notes that the Top 1% paid 22.3% of all federal taxes. 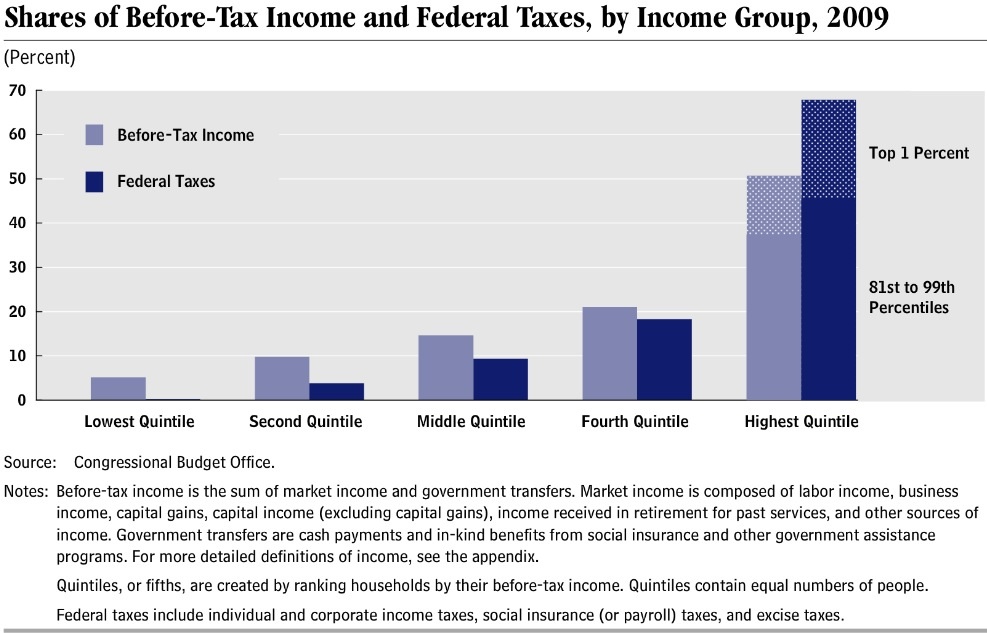 46% of all households pay no federal income tax

This is rather a comment to the question than an answer (there is an answer already, and I could answer only for Germany, not for the US).

However, for Germany the claims are not unknown, either, and the asked numbers for 2011 are: 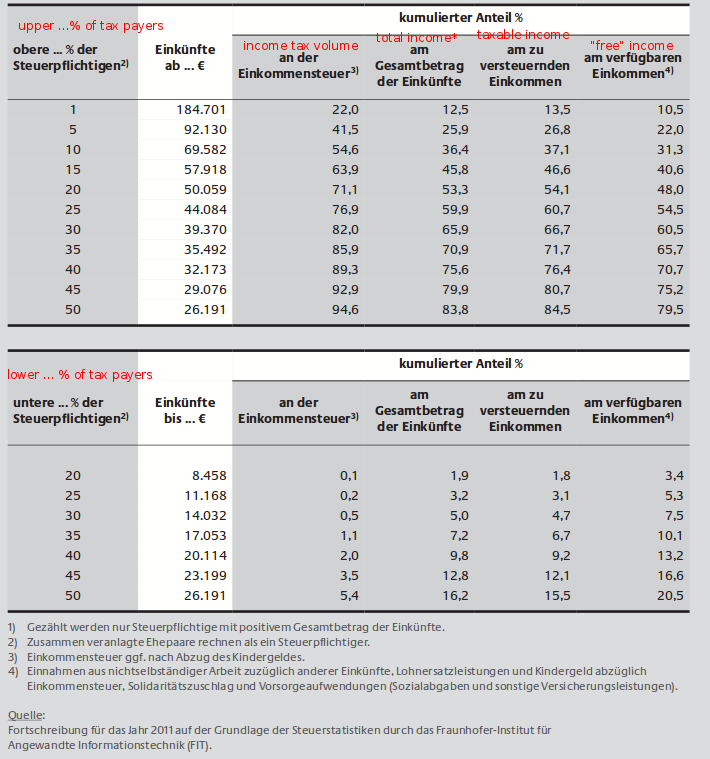 * I'm not sure what the total refers to, possibly it is the total of all federal taxes.

So for political judgment, the numbers from the copied table should maybe be corrected by including the percentage of adults who are taxed at 0 €. (There are other detailed tables that make clear that the copied table refers to people actually paying taxes only)

Even among those who consider themselves upper or upper-middle class, fully 52% say upper-income people pay too little. Only 10% of this group says upper-class adults say people pay too much in taxes.

I've seen numbers for Germany that suggest that there is a substantial gap between who is considered rich by "normal people" and who is considered rich by definition (political discussion). Here a politology prof says in an interview that his students (keep in mind that German universities have no tuition fees comparable to the US) name about 15000 €/month net as threshold for "income-rich", whereas the official wealth-and-poverty report uses a threshold of 3250 €/month net wage (rough estimate: 7500 €/month gross). So there is a gap of a factor of 4.5. That is comparably extreme, but this statistics shows the same trend (the lowest category in the diagram corresponds to the median income over the tax payers, i.e. people that contribute ca. 6 % of the total income tax volume (Wikipedia, Tax payer's federation). Both sources also say that a similar effect happens for low incomes: they do not perceive themselves as as low income percentile as they actually are. Seems to be same in Argentinia as well, where people from the lower decile perceive themselves as belonging to the 4th decile, while those from the 10th decile perceive themselves in the 6th.

Also this finding is IMHO less astonishing if read together with the income distribution (at least for Germany): if there are many people with income close to the median (or any other percentile of interest), a comparably low absolute difference makes a high difference in rank (percentile). Therefore, also a low absolute error in estimating other people's income (e.g. the median) will make a higher error in placing yourself into the correct category. Of course there may be also a bias due to wishful thinking: in societies where equality is considered good, you'd like yourself to be close to the normal person.

Not the answer you're looking for? Browse other questions tagged united-states taxes .

12
What are the benefits/drawbacks of a weighted vote based upon federal taxes paid?
11
What is “politology”?
0
Is the Affordable Care Act a regressive tax (who is most affected)?
3
Is modern wealth disparity a mitigated form of noble priviledge?
-1
In the US how does the 13th amendment, 16th amendment work simultaneously with life, liberty and the pursuit of happiness?
1
What share of federal tax breaks do the rich get?

11
Which party did the US citizens who don't pay federal income taxes vote for in 2012?
1
What share of federal tax breaks do the rich get?
53
What does the POTUS do, exactly?
2
Is there any evaluation of solidarity tax impact in France?
1
Why are property taxes higher in some places than others (United States)?
9
Why do we pay taxes during a government shutdown?
30
Why isn’t the tax system continuous rather than bracketed?