Is Trump's US travel more expensive than previous presidents?

I have heard many complaining that Donald Trump costs the government large sums of money to secure him when he is in a US location other then the White House. Including when he was staying at the Trump Tower before moving to the White House and his trips to Florida on weekends.

Is the expense, both for securing him and in terms of lost productivity to the location he travels/stays at due to places being shut down to secure him, noticeably larger for Trump then it was for other sitting presidents?

According to this article by Bustle, his travel cost would exceed Obama's by a huge margin.

If Trump's cost of travel stays consistent throughout his entire presidency, he is set to outpace Obama by a long shot. If he stays in office for one term, his travel costs could reach $480 million. A second term could see that price tag skyrocketing to $960 million. In comparison, Obama's travel cost hit a mere $97 million throughout his eight years in the White House.

This $10 million's "calculated from an October 2016 Government Accountability Office (GAO) estimate of presidential travel costs to Florida" according to an article by Vox.

The figure for Trump’s trips, calculated from an October 2016 Government Accountability Office (GAO) estimate of presidential travel costs to Florida, includes only the expenses associated with Trump’s three trips to Mar-a-Lago — which he’s dubbed the “winter White House” — since the inauguration. It doesn’t factor in other costs, such as his adult sons’ recent trip to the United Arab Emirates to open the new Trump-branded golf resort and the associated Secret Service tab.

This article by The Washington Post details the cost of his trips which would be useful if you want to get a sense on how the money is spent:

What really jumped out at some people, though, was that Trump was proposing cuts to some relatively low-cost programs shortly before he prepared to fly to his Mar-a-Lago resort in Florida. According to an analysis from Politico, that’s a trip that costs about $3 million each time — and it’s a trip that he’s made four times this year.

But it's also due to the fact that he travels more than his predecessors:

Part of that is due to Trump’s frequent trips to his Mar-A-Lago estate in West Palm Beach, Florida. St. Patrick’s Day weekend marked the fifth time Trump made the trip to Mar-A-Lago since he was inaugurated Jan. 20. In part because of high security costs, each trip to Florida costs an estimated $3 million. After five trips to his “Winter White House,” Trump’s trips will have cost taxpayers an estimated $15 million. 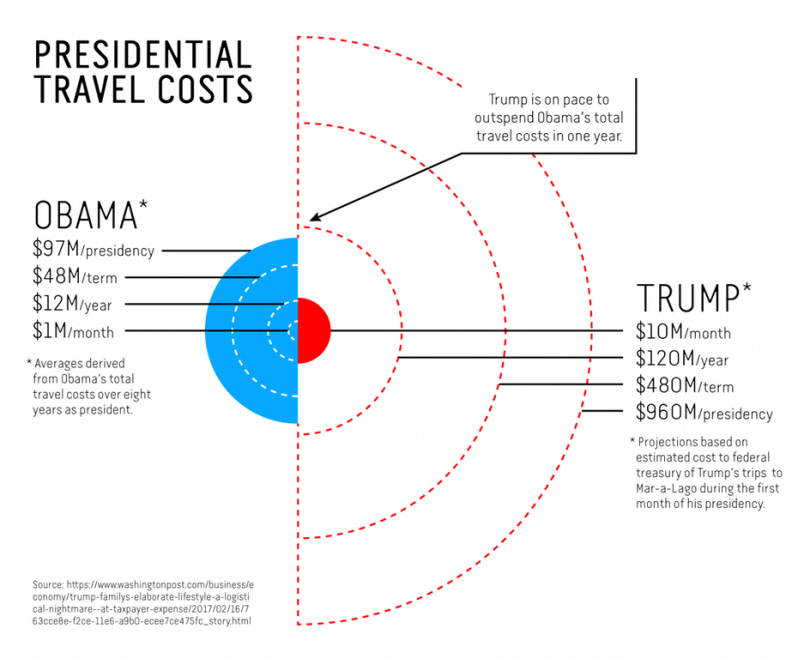 So after doing a little research, it would seem that the "Presidential Travel Costs" are higher. But unfortunately, it's not an apples to apples comparison. Mostly it seems that the graph is comparing "estimates" to reported costs. Some (or most) of these estimated costs may be way higher then they actually are. It also seems that the number listed includes money spent before Trump became president. Looking at the Mar-a-largo trips only (which the graph seems to do), the estimated costs actually come from Obama's trips to the area. When looking at the larger idea of "more expensive" the actual "expense" is not yet known and the estimates are based on numbers like $1,000,000 a day from New York, which turned out to be more like $308,000 a day. Still a big number, but a far cry from $1,000,000.

While it's hard to find exact numbers Sites like https://thinkprogress.org/trump-first-month-travel-expenses-11-million-a1feb6cd829b seem to indicate that the costs also include expenses for his wife, sons, etc. etc.

It's also important to note that the costs are estimates and not real numbers. Some of those estimates are based on Obama's travels and not Trump's.

Some intresting excerpts from https://www.washingtonpost.com/news/politics/wp/2017/03/17/how-much-is-donald-trumps-travel-and-protection-costing-anyway/?utm_term=.5f6602bb3066

We can start with the Trump Tower number. The million-dollars-a-day figure was sourced to three city officials, reflecting the city’s costs.

In February, the city of New York detailed precisely how much it had been spending to provide additional security at Trump’s home. Between the election and the inauguration, when Trump was living there as president-elect, the city spent about $308,000 a day. Once Trump moved to Washington, the city expects that the cost will be up to $145,000 a day when Trump isn’t visiting. (He hasn’t since being inaugurated.) That’s sharply lower than $1 million a day.

As pointed out, that no where near the estimated $1 million a day.

CNN estimated that one of the floors of space reportedly under consideration could cost $1.5 million a year — or about $4,100 a day. If those numbers are all correct, and if the military rents that floor, the total for protecting Trump’s family in New York is a bit under $200,000 a day, including New York City’s costs.

Again this is if they rent space, and it they rent that much space. We don't know yet (I think) that they are, or what kind of price they will get if they do, but Trump hasn't been back to Trump tower sense he became president.

Politico’s $3 million-plus estimate was based on an October 2016 Government Accountability Office report on a trip President Barack Obama took in 2013 — a report that The Post has also cited. That 2013 trip, which included a stop in Palm Beach, Fla., cost $3.6 million, $3.2 million of which was the cost of aircraft.

Airforce one, and it's support, is expensive there is no way around that. But the estimates used for "Trump's Costs" came from Obama's trip. Which is fair, IMO, but should be noted.

In part, it’s the cost of support aircraft. That 2013 trip included five other planes and four helicopters as part of Obama’s overall team, serving defense and short-distance transport roles. (The president goes to and from Andrews Air Force Base by helicopter, for example.) But that trip also included an unrelated trip to Illinois, meaning a much more complicated ballet of movement than Trump’s Mar-a-Lago trips would require.

Basically, did Trump take the same number of helicopters and side trips? If not then his costs may be more or less, it depends.

So, again, and the main article is important to read, the number seems to "adjust" down from the estimate considerably, and even the source of the number states that is a "very loose estimate".

16
Do previous presidents/elected officials retain security clearance after they leave office?
8
How does the timeline of Donald Trump's appointments compare to that of previous President-elects?
19
Long term, does Trump's wall cost more than it saves per year?
4
Does a tariff of 25% on steel imports do anything other than make steel more expensive in the US?
8
Have there been any personal attacks on Sondland after his change in testimony on the quid-pro-quo?
0
If a US supreme court nominee is selected by political opportunism, does the nominee ignoring that demonstrate insufficient ethics for the job?
5
How do President-elects and Vice-Presidents elects travel?
11
Why is the Trump wall more expensive than the Egypt-Israel barrier?
1
Why are US presidents more likely to have pets than the average American household?
21
Why would a former US president's announcement of a reelection bid cut off legal defense funds?