Is this a good way to count Single Transferable Vote ballots?

I've been asked by my employer to create an online voting system for internal elections (e.g. board of directors). Our bylaws dictate that we need to use STV.

I wasn't satisfied with the existing software available for counting STV elections, so I rolled my own. Here's how it works:

Here it is in flowchart form: 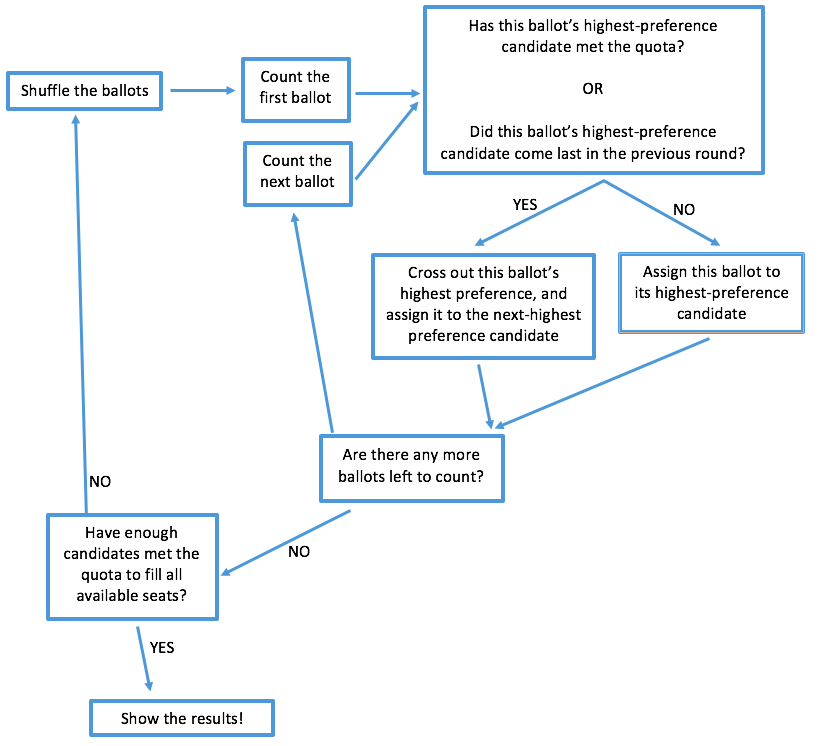 After doing some reading on different counting methods (this comparison [PDF] has proven to be very helpful), I realize that my counting doesn't really fit within the established methods. Here are some of its characteristics:

To be honest, I don't really know if these qualities are good or bad – do they make my method susceptible to vote-rigging? Is it less proportional than another method?

Please let me know what you see as the pros and cons of this counting method. Personally, I think it's easier to understand than the other methods I've come across – but that also means it's probably less robust!

Edit: Here's a sample vote count for an election with 10 candidates competing for 5 seats. 1000 ballots were cast. The Quota is 167. 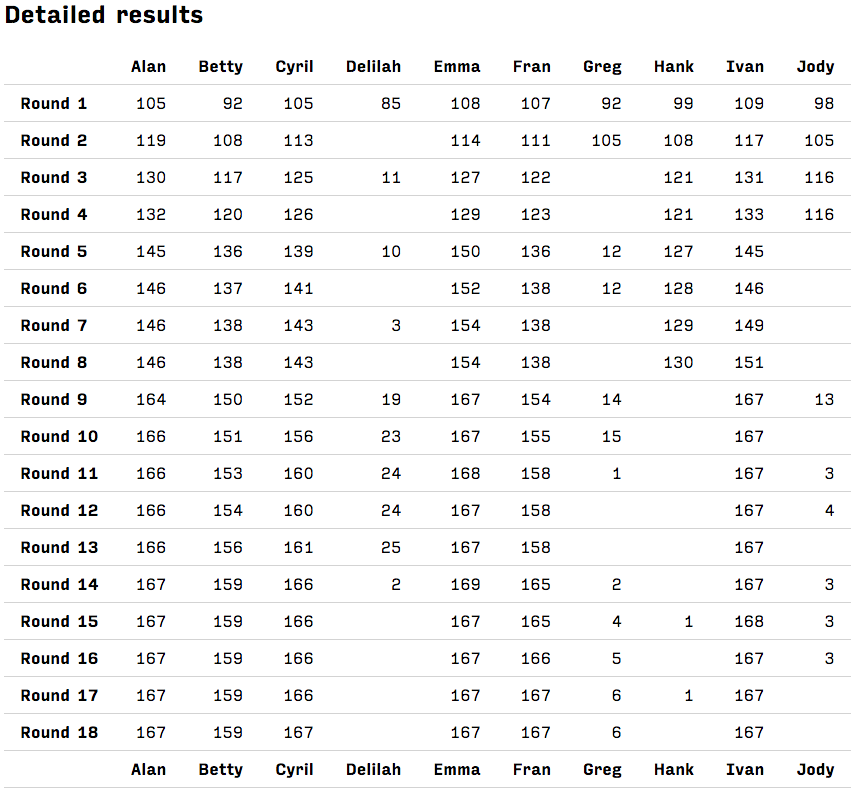 Delilah receives the fewest first-preference votes. So, in the second round, Delilah is crossed off those 85 ballots and the second preferences are counted.

Greg has the lowest number of votes in round 2, and the same happens to those 105 ballots in the next round. 11 of those happen to have Delilah as their second choice.

I think the fact that you never eliminate candidates could be a problem - in same cases you won't even get a result.

Let's say you have 10 candidates trying for 5 slots, and 1000 votes. Each candidate gets between 50-150 votes. But 150 is less then the quota (using the Droop method, the quota would be 1000/[5+1] + 1 = 167) Nobody meets the quota - so how do you determine who wins? In most systems, you'd eliminate the weakest candidate and transfer his votes (and either that puts someone over the quota and you can transfer some other votes, or you keep eliminating candidates until the number of candidates equals the number of seats), but in your system that's not done. Your flowchart would just loop endlessly, counting and re-counting forever.

I'd also point out that, since candidates are never eliminated in your system, if you vote as your first choice a candidate who is not eventually elected, then your second choice will never be counted. I think this goes against the intent of single-transfer voting. I think eliminating a particularly weak candidate actually does a favor to those who voted for that candidate, as it ensures the transfer will kick in.

On another note, I really don't like any randomness in the system. Outcomes should be determined by votes, not by the shuffling algorithm of your software.

The biggest problem that I see with this is that it is possible to get different results in a recount. So I would never recommend it for a government election. You'd have politicians trying to game the system to get the "right" recount.

One might argue that there are often random tiebreakers, but these operate at the end of the process. So everyone can agree on the recount up to the tiebreaker. Then there is one single random event that they can record. So if the recount has the same result, they can keep the original tiebreaker.

To get a similar result here, you would have to pick the entire random sequence. This is possible. You could randomly pick a seed for a particular pseudorandom algorithm and preserve that choice. But I'm not sure that doing that leaves the system any easier to explain than the other methods. It has a big element of "trust me, I did the random stuff correctly" in it.

One key feature of elections is trust in the counting method. Which makes choosing your own system a bit of an issue - not least given the flaws people are picking up on.

There are bodies (such as the UK Electoral Reform Society) with >100 years experience of doing this. They publish a guide on using STV including detailed instructions on how to run a count.

Detailed Instructions for the Count

I strongly suggest you use a proven process by this or a similar organisation. Even if your system was great you would still not have the credibility/confidence/defensibility/validation of something like this.

You can fix this by internally counting it like a Ranked Choice Instant Run off and elimintating the lowest performing candidate each round. If you have 6 candidates and one spot, candidates A, B, C, D, E, F. The ballot will display each candidate with six radio boxes and the voter will choose most favorite to least favorite from left to right (if you want candidate A to win, you mark A with the first radio box. If you want A as your last pick, then you mark A with the sixth radio box.).

For each round, keep a list of candidates running ranks resulting from the round, with the. To seed the list, list all candidates with the order they appear on the ballot. You want a Round list with the score as your returned objects. Keep the list of ballots constant.

For each ballot: - find the candidate voted first choice (should be marked with a 1) - Add one point to that candidate on the Round List.

This works because in Ranked Choice Instant Run Off voting, the vote only transfers on elimination in a round. Each round, the remaining candidates will only increase their votes as the eliminated candidates are redistributed. By raising all candidates that were given a lower ballot rank than the biggest loser by one and only counting the candidate scored at one for each round, the rank is preserved as the eliminated candidates vote now goes to that round's number 2, 3 becomes 2, 4 becomes 3 and so on.

By only counting the first choice for each round, we will eventually come to a point where the ballots will only have a first and second choice and the gap becomes narrower. You could even argue that the sixth choice defaults to zero as your sixth choice will never come into play (as at worst, the 51% threshold can be crossed in 5 rounds and at best, the first round. So long you are taking the results of the final round, you can use the results of any round below N. If you have three seats, than you will eliminate 2 candidates and the distribution of the final candidate doesn't matter as the viable candidates are first picks in round four for every voter.

26
Why isn't a Condorcet method used?
6
Condorcet method for two seats
11
In Bundestag election, can a party abuse the system by endorsing independents in constituency (first vote) races?
0
Why can't local representatives be chosen directly in proportional voting by selecting the top ranking candidates in each district?
6
With a single transferable vote, how are the transfers selected?
15
How will New York City physically implement the ranked choice voting algorithm with thousands of unique mayoral votings possible?
6
Can this paradox happen in single transferable vote?
5
Ranked choice voting: Can a candidate who got dropped in early round come back in later rounds?