How effective has the war on poverty been at eliminating poverty?

Lyndon Johnson declared a war on poverty in his 1964 State of the Union address.

The War on Poverty include several social programs

We are coming up on the 50th year of LBJ's War on Poverty, How effective has the war on poverty been at eliminating poverty? What percentage of the population is living in poverty today as compared to 1963, after LBJ's war on poverty?

This page from Politifact.com goes over a lot of the relevant data. Since 1965, total poverty rates have been reduced from 17.3% to 14.3%. However (as the other answer shows as well), these rates are somewhat dependent on the economy. Before the recession, poverty rates were even lower, at 12.5%.

For some groups in particular, poverty rates have dropped dramatically. 30% of the elderly were poor in 1965. Now, only 13.2% are. Poverty rates for African Americans have also dropped similarly.

The poverty rate has fluctuated along with the economy, but is approximately the same now as it was in 1965. 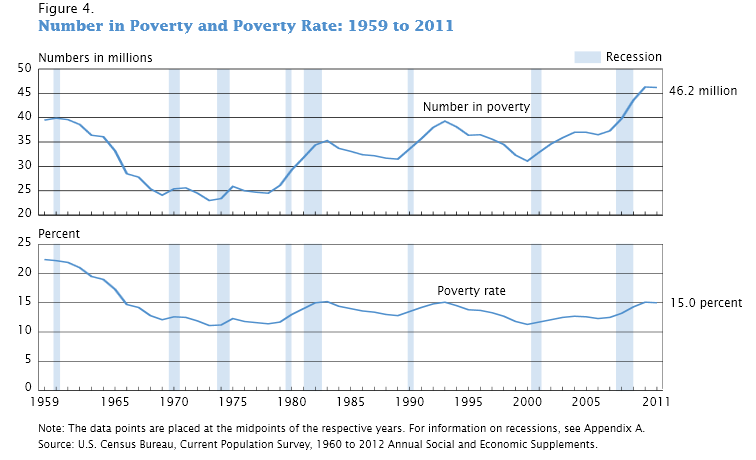 Not the answer you're looking for? Browse other questions tagged united-states poverty .

0
What are the ramifications of eliminating the MLR requirement in ACA
5
Has any organization ever made it off the SPLC list?
3
Treasury sanctions against Russia - authorized? And how effective?
15
How much of Trump's border wall has been completed so far?
11
How does one parse the notion of "systemic racism" in the context of poverty?
6
How do crime rates compare between Black and White populations of similar economic status, particularly for those below the poverty line?
4
How effective has the sanction on selling of arms to China been?