Is there a study that seeks to quantify left/right bias by gender and country?

Here in Russia, women tend to be much more right-wing than men.

Women more often support free market, privatization, vote for billionaires, support the US and NATO policy, support copyright, anti-Communism and other policies associated with the right-wing.

Women are also more kin to learn foreign languages and get a profession associated with finances and management while men are likely to work in industry and to study engineering.

So I want to learn what is average distribution of political sympathies between right-wing and left-wing policies by sexes in other countries.

In USA (and likely, in the rest of the western countries) the gender gap is decidedly the opposite to what your thesis is for Russia (though, without details of Russian polls and statistics, I am unsure how much of the data in your question is a personal guess and how much a fact).

The people press has reported recent statistics (this is Pew which is typically considered somewhat of a Democrat-biased polling, but the margins are huge enough that the bias won't matter): 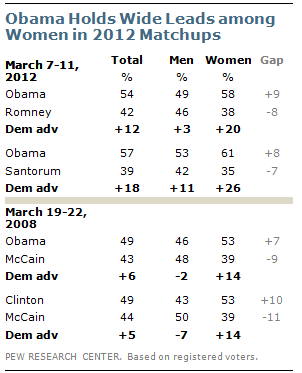 Now, in USA, the really interesting fact is that this huge dis-balance is entirely due to unmarried women (I can list speculated reasons, but DA would start screaming that it's a biased answer). From ABC in April 2012:

In February, 64 percent of unmarried women said they would vote for Obama over Mitt Romney, the presumptive Republican nominee, according to a Democracy Corps survey analyzed by Democratic pollsters. Only 31 percent picked the GOP candidate. The gap — 33 points — was 10 points bigger than in it was in January.

Now look at what married women say: 56 percent said they would vote for Romney, and only 37 percent for Obama, with virtually no change from January to February.

The following is not a country-by-country study of the gender gap, but an economic theory of why it exists. http://seekingalpha.com/instablog/399221-tom-au/80964-men-are-stocks-women-are-bonds

In the U.S., the gender gap extends to the "left," and women are more liberal, because they have more options. In traditional societies like Russia, they are more conservative, because their social holdings are more like "bonds," with fewer, but better protected rights, hence more interested in stability than in change.

(I am no expert on politics, but as the published author of A Modern Approach to Graham and Dodd Investing, have some expertise on stocks and bonds. I also believe in Keynes' dictum that "Practical (wo)men...find themselves the slaves of some defunct economist.")

Not the answer you're looking for? Browse other questions tagged ideology gender political-spectrum .

31
Is there a term for someone whose preferred policies are a mix of left and right?
77
Is there a push, in the United States, to use gender-neutral language and gender pronouns (when they are given)?
35
Is there a country or state which issues gender free ID cards?
5
Is there any public health system that registers both biological sex and gender in the medical records?