What are the reasons behind a strong anti India sentiment in Bangladesh?

We all know that Bangladesh got independence from Pakistan because of India. So generally one can assume that relationship between India and Bangladesh is friendly. But the reality is different. There are constant clashes between Indian border security force and Bangladesh army on the border. From what I see on the forums and social media, there is a very strong anti India sentiment among the Bangladeshi. what are the reasons behind this?

Brief history of creation of Bangladesh:

Before independence Bangladesh was a part of Pakistan it was called East Pakistan back then. The Pakistani government always treated Bangalis as second class citizens. Political power was concentrated in West Pakistan (modern day Pakistan) and it was widely perceived that East Pakistan (modern day Bangladesh) was being exploited economically. This started rebellion in East Pakistan. In response to this rebellion Pakistan's army conducted operation searchlight in November 1970, which include significant numbers of civilian casualties (300,000 to 3,000,000, sources vary widely on the exact number).

To stop this massacre India stepped in, defeated Pakistan in merely 13 days and Bangladesh came into existence.

While it is true that India did play a huge role in giving Bangladesh freedom, history is not derived from one act or event alone. To understand the sentiment today it can be broadly broken down into the following two sets of reasons: 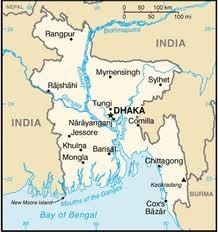 Within four years of the liberation, the army (allegedly with the support of the Pakistani ISI, Chinese and American intelligence agencies) had taken over. Mujib’s (The founding father of the country) whole family was assassinated, except his daughter, Sheikh Hasina. And the new military regime highlighted the Islamic — rather than the Bengali identity — of Bangladesh, and India was left with barely any role.

In addition, post 1975, Bangladesh became home to Jihadist elements such as the Harkat-ul-Jihad-al-Islami with a strong anti India focus rumoured to have been funded and supported by the Pakistani ISI. When Gen. Ziaur Rahman became Bangladesh’s virtual ruler following several bloody military coups in 1975, he told the United States

that India intended to invade its small neighbor to install a puppet regime.

Fearing a direct Indian intervention, the new regime instructed Nazrul Islam, acting foreign secretary of Bangladesh, to seek U.S. support to discourage New Delhi. This set the tone, for an entire generation of new Bangladeshi citizens to be brought up with the belief that India was a hegemony who had assisted Bangladesh only to set up a friendly puppet regime.

Even, with the return of democracy in 1990, one pole of Bangladeshi politics was taken over by BNP, which defined itself in terms of opposition to India (which by now seemed to work well to win political backing from various vote banks), flirted with Islamism, and turned a blind eye to terrorism as well as attacks against minorities.

Present Reasons (which are compounded by the historic reasons):

The two primary ones would be:

Existing political/geographic disputes: The two countries share a very long and complicated geographic border. Even post the signing of the Land Boundary Agreement in 2015, the situation of the enclaves remains tensed.

Illegal immigration: Illegal immigration from Bangladesh has been part of political discourse in West Bengal, Assam and the other North Eastern Indian States. India has from time to time raised this issue with Bangladesh including having actively pursued this issue with General Ershad and later with Begum Khaleda Zia when she visited India in 1992. Since Bangladesh refuses to accept that the Bangladeshis are illegally migrating; India decided to fence the border and has adopted a push back policy (albeit not stringently), which sometimes has resulted in tensions between the countries.

In addition to these two primary issues there are multiple issues that repeatedly cause friction between the two countries including but not limited to the water sharing dispute over the Farakka Barrage and other rivers, trade and investment issues with other regional countries such as China investing to gain greater political favour, and maritime/fishing disputes.

There is certainly a border issue between India and Bangladesh. The major reason for this issue is, to put in simple terms (without any political jargon), there are nearly about 100 Indian villages inside Bangladesh territory and 71 Bangladeshi villages inside Indian Territory. This villages or territories are known as chitmahals or enclaves in political term.

Many Bangladeshis immigrate illegally to Indian states, like Assam, in north eastern India. This has led to killings of Bangladeshis on the border which definitely gives rise to anti-India sentiments. There were also skirmishes during the border fencing project between the Indian BSF and Bangladeshi Army.

There are "anti" sentiments on both sides, even if it is very mild in India. And this "anti" becomes "ultra anti" at the border region in North-East India and western Bangladesh.There were riots in Assam last year (June, 2012) between native Bodos and so called Bangladeshi Immigrants. As Bangladesh is a small country, unlike India, even its remotest village is somewhat nearer to the border. So, it looks like there is more anti-India sentiments in Bangladesh than anti-Bangladeshi sentiments in India.

There are multiple issues involved:

Not the answer you're looking for? Browse other questions tagged international-relations india bangladesh .

15
For what reasons does India claim a permanent seat in UNSC?
6
What influence does India have on Bangladesh?
6
What was the premise behind the Bush/Obama administration's “we don't negotiate with terrorists” sentiment?
6
For what reasons does India not provide proof that it attacked terrorists on Pakistani soil?
11
What are the law changes farmers in India are protesting about
3
Why are India and Bangladesh not members of ASEAN?