How does Social Security work in the United States?

There are political discussions in the United States regarding whether Social Security is maintainable over time.

I want to know how the Social Security system works in United States, and what the basis is of the concerns about its maintainability.

First, the formal basic information on how Social Security works:

Informally, it's very simple from the view of an individual:

Here's a bit more on how Social Security formally works - this seems to be fairly comprehensively answered on Wikipedia, especially Current Operation section

The FICA taxes are imposed on all workers and self-employed persons. Employers are required to report wages for covered employment to Social Security ...employers deduct these payroll taxes from workers' wages before they are paid. Generally, the payroll tax is imposed on everyone in employment earning "wages" ... and also taxes net earnings from self-employment.

Current year expenses are paid from current Social Security tax revenues. [ This is critical to understanding the problem - DVK]

When revenues exceed expenditures, as they did between 1983 and 2009, the excess is invested in special series, non-marketable U.S. Government bonds, thus the Social Security Trust Fund indirectly finances the federal government's general purpose deficit spending.

Now, for the maintainability problem.

So, once we have "too many" Baby Boomers retired and drawing SS benefits, for "too many" years, with "too few" - relative to that - people paying FICA taxes - there eventually simply won't be enough money in the system to pay all of the promised benefits, without additional sources of revenue. (where "too" refers to assumptions made when original SS system was calibrated)

Somewhat controversially, Social Security can be envisioned as a giant Ponzi scheme (marketing pyramid). Here's how it works.

Your Social Security just went broke. Welcome to what will happen to 21st Century in USA, when all the Boomers who couldn't be bothered to raise enough children will all over the sudden retire, and live longer than SS-originally-planned in retirement years.

I won't answer the entire question, as it appears a lot has already been written, but will try and provide a really quick TL/DR response to your second part:

and what the basis is of the concerns about its maintainability

This creates two potential problems (both of which are happening now):

Alas, the system wasn't designed to handle these fluctuating variables automatically very well...hence the need to debate how we're going to go forward with fixes.

Social Security wasn't set up to handle the fluctuations of the economy and demographics as well is it maybe could have been.

(These are rather additional thoughts to @DVK's answer which are too long for a comment.)
Also, it is from a German perspective, because I know the numbers here better. There quite some differences between the US and Germany, but I think they don't matter that much for this question.

edit: turns out that the US system is more different from the German system than I initially thought from @DVK's answer, because
in Germany the pay-as-you-go is set up in a way that it ultimately will never go bancrupt, but the contributions may explode or the paid out pensions may loose in value instead (or, cross-financing by general taxes, which is roughly 1/3 of the total volume already, increases).
In contrast, the US system is more closed, and if I understood correctly, guarantees a money value of payments, but OTOH does hold reserves and projects the sustainability of the funding for 75 years.

However, knowing this, I think that the scenarios I calculate below actually are more relevant to the original question than I thought: because the US social security actually does these projections, they should have been pointing out the problem early. A decline in births is something that can be spotted basically immediately. The decline in births could have been spotted latest by ca. 1965, probably earlier because it was linked to a solid reason.
In 1965 the oldest of the baby boomers were 20 years old - that would have left almost 50 years to accumulate more reserves, and the whole work life for most of the baby boomers. Obviously, the decision whether to increase FICA or reduce paid out pensions is a political one.

But in any case, this population pyramid of the USA does not suggest any serious decline in the working generation: 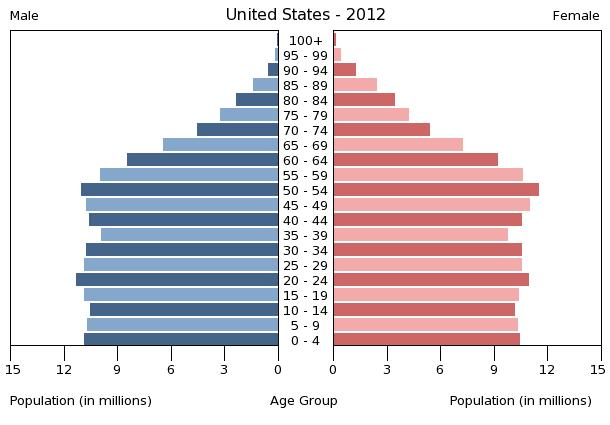 particularly not compared to other countries:

Due these social security reserve projections say that at the current funding scheme, the pension cass will run out of money within 10 or 20 years - still quite some time to take decisions.
So from a German perspective, I'd say with respect to the demographic change, the US system works quite well.

So:
The calculation seems somewhat arbitrary to me (as does the major part of similar discussions I've heard): it assumes that children are raised at no cost.

In fact the 1 yr working adulthood has to pay for the pensions as well as for the children. A quick search on some numbers for Germany

Bottomline: order of magnitude for raising a child and providing good education is at least the same as for the pension. With that the calculation changes:

Note that the paying off of the debts does not include any interest, and that bancrupcy of the pension is only avoided by the retirements savings of the large (6p.) generation who had to pay off the debts their parents made for raising them and had to accumulate savings for their own retirement. This was possible because they did have the economic strength, but had they not saved the surplus while working, the pension system would have been bankrupt.

A more "German" version would not have family savings, but a governmental education cass in addition to the pension cass, and cross-funding would happen between pension and education.

Here's a variant II, where the parents economize to raise their children.

The situation would be basically the same if the grandparents help saving the initial 200€. The "wealth" of 200 € that is left at the end was basically created by the savings of the 2nd year. Note that the pension cass is barely left with a ±0.

The bottomline is that with this system, a growth in total population is the problem unless the gross product increases accordingly. Note that the estimated costs for education mean that this problem is even bigger, because each child costs roughly 1 1/2 as much as a retired person (people also live of their savings in retirement, but in any case raising a child is nowhere near negligible compared to pension costs). Yet, often more children are seen as the solution to the retirement problem. That would work only if raising a child was cheap, i.e. cutting down education - not a good idea.
A decrease in population can in principle be buffered by a partially capital/savings based pension system, but that needs economic discipline (of which I do not see much in current politics - edit: yet the US social security reserves seem to me amazingly well preserved). I've often heard the argument that a capital-based retirement system doesn't work out as the retired needs someone to look after him and someone to grow the food when he is retired. Howevder, also that is only partially true: there could be more people to grow the food if they didn't need to build a house to live in because the retired had done that already. But note also, that in our scenario with a population growth first before the decrease in population, the capital based system would have been bancrupt immediately: during population growth, there was no possibilty to save for the retirement.

In reality, I guess one also needs to take into account that saved money "itches", and "wants" to get spent (maybe that's more a European problem - see edit above). Particularly if it isn't one's own savings, e.g. politicians deciding at the +200€ stage of the pension cass to cut the tax rate going into pensions. Or, the baby boomers in the first scenario may find it unfair that they should save after they have already paid the debts. So they spend the surplus, and then the system goes bancrupt.

Not the answer you're looking for? Browse other questions tagged united-states social-security .