When may the President of the United States order military action without congressional approval?

The USA has many times in the past taken military action with only the President's order to back it up legally. It was Jefferson that set the precedent of using the military to enforce foreign policy when he ordered the assault on the Barbary Pirates, though there was some measure of congressional approval (I've often wondered why this discussion was not had after the Whiskey Rebellion, but that was different in a few ways). Fast forward to the past two decades and there are numerous examples of the president ordering military assaults on sovereign nations unilaterally, meaning, without any discussion or approval from Congress. The most recent example is that of current President Trump ordering a missile strike on Syrian forces believed responsible for a chemical attack on Syrian citizens.

From my reading, it seems to me that at least some congressional approval is required for any military action, per the Constitution. Many pundits certainly agree. However, many still implicitly support unilateral presidential military orders by not objecting to President Trump's order, and even applauding it. Further, some argue that the Constitution mandates a formal declaration of war if there is to be any military action.

What is the line here? At what point must the president seek congressional approval to order military action? Is it based on targets, scale of the attack, or something else? At what point is a formal declaration of war necessary? Is scale a factor, considering Vietnam and Korea? I have to be honest, it seems like a damn free-for-all with zero checks and balances, and it's just a matter of time until the president unilaterally plunges the world into nuclear war.

The War Powers Resolution of 1973 sets forth the official 'rules' for what the President can do, and how Congress needs to be involved.

The War Powers Resolution requires the President to notify Congress within 48 hours of committing armed forces to military action and forbids armed forces from remaining for more than 60 days, with a further 30-day withdrawal period, without a Congressional authorization for use of military force (AUMF) or a declaration of war by the United States.

In practice, Congress has been pretty elastic in enforcing the letter of the resolution...

Yes, the President can theoretically initiate a nuclear strike on his own (not clear if this is actually true in the absence of any threat to the US) but he would still need to notify congress within 48 hours.

Edit: https://politics.stackexchange.com/a/9845/11434 gives a more detailed answer on the President's ability to launch nukes on his own.

Update: April 7, 2017 Nukes Podcast from Radiolab discusses the President's authority to launch a nuclear strike. In short, the 'nuclear football' that is near him 24/7 has (among other things) a menu of options including targeting lists and authentication codes, and connects him directly to the National Military Command Center (NMCC). He may consult with others, but he is under no obligation to take their advice. Implicitly, the land based ICBM's would be on their way within 10 minutes of him picking up the phone.

Note that Truman did not seek explicit Congress approval for Korea because of the UN resolutions, although this was deemed politically unpalatable by later presidents... who still maintained that it was constitutional to use the UN-grated powers alone for US military action:

Since President Truman’s “police action” in the Korean War, scholars in law and political science have considered the possibility that presidents would attempt to substitute congressional authorization with authorization from an international organization when using military force. While presidents have on multiple occasions appeared to do so, after considering the scale of the operations undertaken there is clear evidence that presidents since Truman have avoided major war absent formal congressional approval. Instead, uses of force undertaken with mere international approval have consistently been orders of magnitude smaller in scale than those conducted pursuant to formal authority from the legislature.

George H.W. Bush specifically encountered the opportunity to use force unilaterally in the Gulf War with U.N. approval but decided against it because of the anticipated high costs despite simultaneously claiming that congressional approval was not legally necessary, continuing the consistent practice of presidents since Truman. The White House counsel wrote that the action could be legally justified absent congressional approval, but that formal authorization would be beneficial both to gain public support and to share responsibility for a possible poor outcome.

So while "many pundits" (as you put it) think that "at least some congressional approval is required for any military action, per the Constitution"... that's not the legal opinion of the Presidency on the matter. The Presidency considers that the ratification of the UN Charter by Congress legally allows the UNSC to authorize US military action... although making use of this UN[SC] power/route (without a separate/parallel Congress authorization) has been deemed unpalatable (but not illegal) after Truman, at least for major operations. It was still used in Somalia, against Serbia/Yugoslavia (in the Kosovo conflict) and in Libya (2011) though: 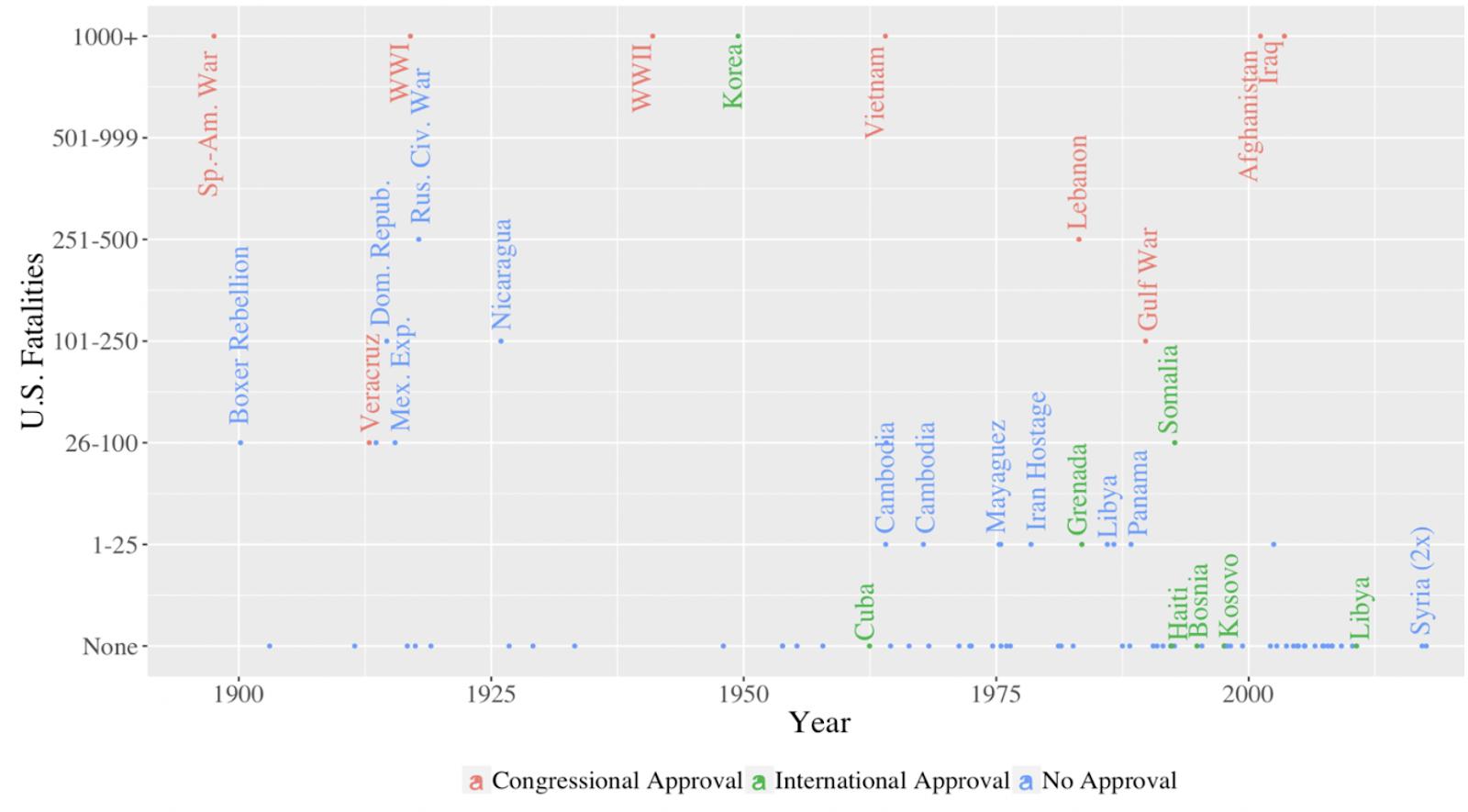 These are what initiate the President's ability to move independently of congress.

Where it gets foggy these days is what is determined to be an "armed conflict". Drones are a great example of a situation that falls through the cracks of the current set of rules.

Not the answer you're looking for? Browse other questions tagged united-states president constitution armed-conflict military .

19
May the US president launch a nuclear bomb without any oversight on any target?
3
Can the US Congress prevent a military action against Iran?

39
Can the current President of the United States block the transfer of their office to the next elected president?
3
Are there any examples of the President going to war without Congressional approval?
3
Can the USA president use military force against his/her own citizens without approval?
8
Can the United States withdraw/renegotiate from NAFTA without approval from the Senate?
1
Does a (US) presidential proclamation have a time limit?
3
If a country declares war on the United States, does the US Congress need to declare war on them?
20
Can the U.S. president make military decisions without consulting anyone?