Does the 16th April Turkish referendum result actually have any meaningful effect?

At the time of writing this question, the Turkish referendum for changing the Constitution has just finished with approval of these changes (about 51% for "Yes").

According to this source, Turkish government has operated tremendous changes after the failed military coup:

Here are some more startling numbers, according to the BBC: 6,000 military personnel arrested, including more than two dozen generals awaiting trial; 9,000 police officers fired; almost 3,000 judges suspended; and more than 250 members of Prime Minister Binali Yildirim's staff removed from their posts, as have 1,500 Finance Ministry employees.

So, from a layman's perspective Erdogan and his Government already have immense power, as they operated a lot of changes in key positions. So, even without a presidential system, Erdogan's will prevailed.

Question: what is the purpose of such a referendum, if the power was already concentrated in Erdogan's and his Government's hands (or at least it looks like this)?

Yes, as the Office of the President is largely ceremonial now. In this referendum, there are a few notable changes to the constitution that will give the President more official powers as seen below.

The existing parliamentary system of government will be replaced with an executive presidency and a presidential system. This means that the office of the Prime Minister will be abolished, thus giving more authority to the President in deciding the policies of the country.

The President will be given more authority over Supreme Board of Judges and Prosecutors appointments.

Also, the incumbent President can now hold the office until 2029, with 1 more 5-year term compared to currently.

This graphic published in CNN summarised everything that's changed: 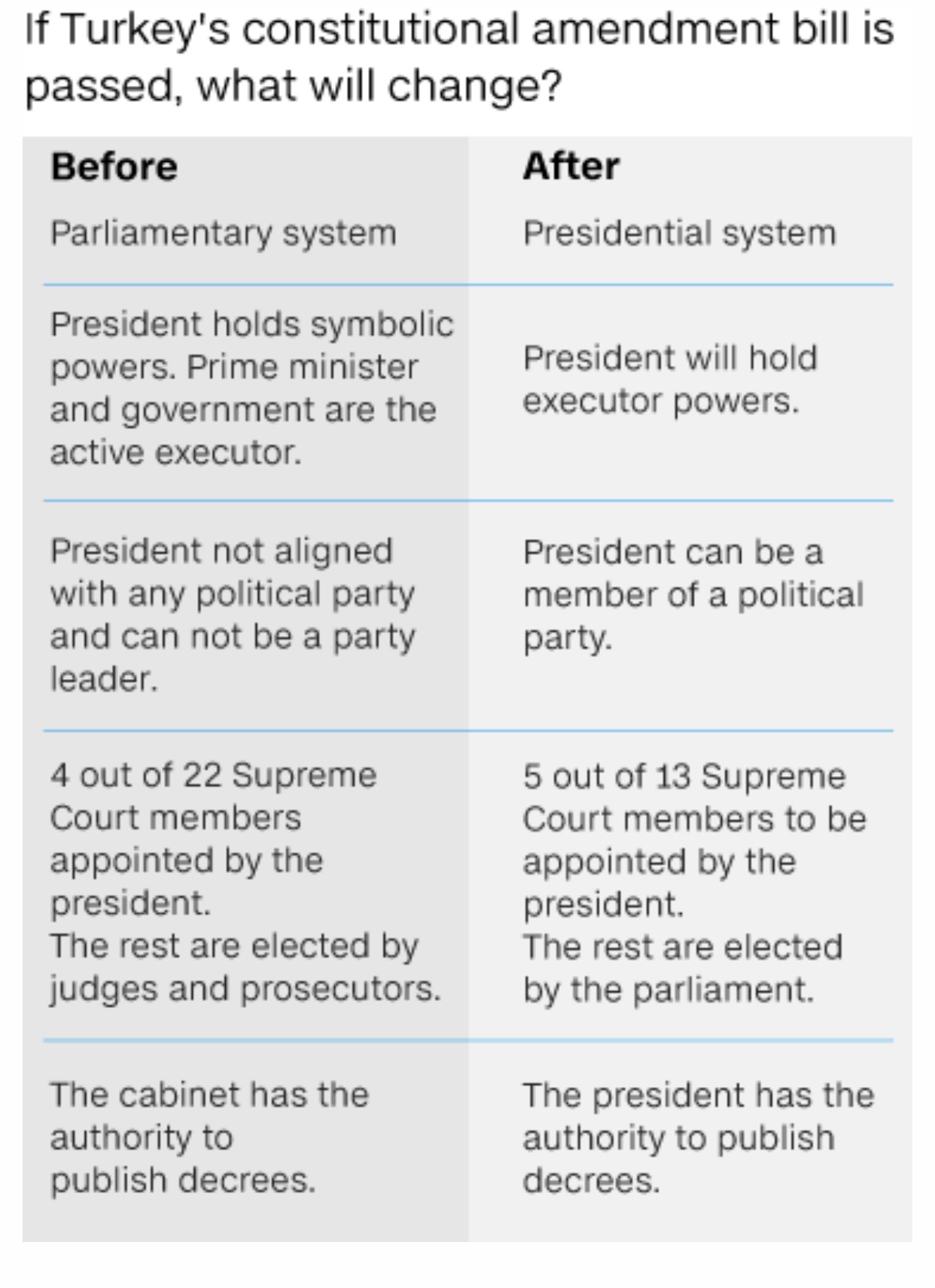 In conclusion, the President will hold executor powers instead of the Parliament if this referendum passes.

For Erdogan, it doesn't really affects much. Because the PEOPLE, more than half supports HIM. So he wins ANY kind of election or referandum and probably he will.

Practically he chose the prime minister and the all cabinet and the all parliament (of ruling party). And even he choses the (his party's) candidates of Mayors for each city.

BUT there will be 2 changes.

So I think the referandum for after Erdoğan.

Not the answer you're looking for? Browse other questions tagged turkey referendum turkish-referendum-2017 recep-tayyip-erdogan .

6
Why is the failed Turkish coup blamed on Gülen, when military coups have historically been secular?
8
Was the Turkish 2017 constitutional referendum held democratically?
12
Why does the 2017 referendum have strong support outside of Turkey?
5
Are turnout figures available at the German consulate level for the 2017 Turkish Referendum?
2
For the 2017 Catalan independence referendum, are there any turnout estimates counting only polling stations where voters were actually able to vote?
2
Does India have something similar to a referendum proposition?
8
Are there any polls on the new Swiss immigration referendum question?
6
Does Hong Kong have the right to hold a referendum for independence?
1
Has the UK had an election, referendum, or similar result either not implemented or put again before being implemented (in modern times)?