Why did Labour support the snap election?

Labour are doing badly as the moment with polls indicating that Conservatives have up to a 21% lead. Calling an early election at a time when they are in a position of strength favours the Conservative party. It seems most likely that Labour will do badly and Conservatives will gain more seats in the general election.

The early election needs support of two thirds of MPs to go ahead as per the Fixed-term Parliaments Act 2011. Labour largely voted in favour and the vote has passed. They could have blocked it by themselves as they have 35% of seats. Why did they vote in favour of an early election which is probably going to go badly for them? 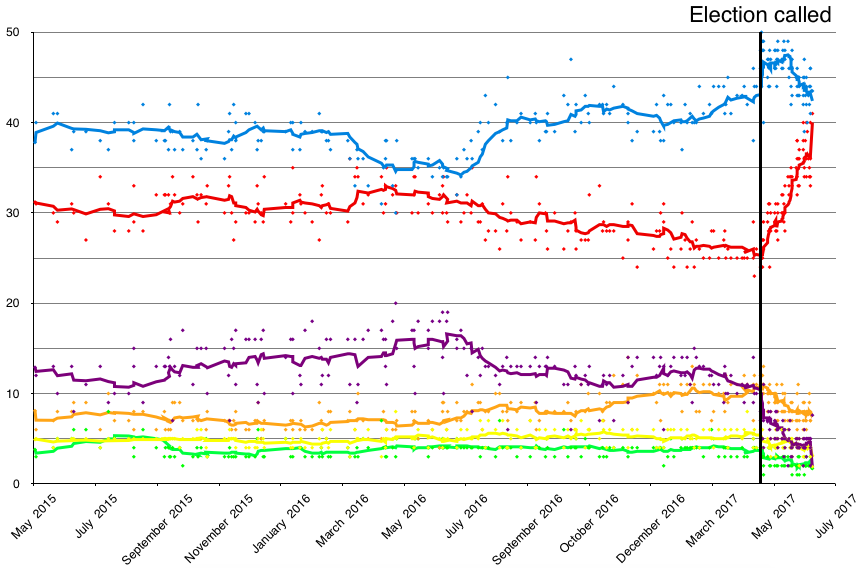 In the 2017 election, Labour increased its vote share by 9.6% (from 30.4% to 40.0%), the largest increase since 1946 and the highest popular vote since the Blair years. Unfortunately for Labour, the Conservatives increased their vote share from 36.9% to 42.4% and got their highest popular vote since the Thatcher years. Due to the intricacies of First Past The Post, the Conservatives lost seats despite gaining votes, and Labour nearly equalled its 2001 vote share, but got 150 fewer seats compared to then. The differences are due to performances by Liberal Democrats (which collapsed since 2001, but increased their seats despite losing votes between 2015 and 2017), UKIP (down 11.2% between 2015 and 2017, lost its only seat), and (in Scotland) the SNP (the dominant party in Scotland since 2015).

Hypocrisy is a killer accusation in politics.

The question of an early election arose as soon as Cameron resigned. The labour party raised the issue of "mandate" and declared that they would be ready to fight an election as soon as one was called. Under these circumstances, it would be seen as hypocritical to then prevent an election that they had demanded a few months earlier.

We won't know precisely how Corbyn made his decision to support the election. The risk of losing seats now would be weighed against the loss of face from refusing to face the electorate, the potential to lose worse in 2020, and the possibility of an upset and winning. Furthermore, Corbyn may well believe that if he has the opportunity afforded by an election to sell his ideas to the people, he will get many more people supporting him.

Finally, part of his calculation may be that, if he loses now, he can remain as leader of the opposition until 2022, whereas if he loses in 2020 he would have to resign.

Labour likely felt that they had to support the snap election or look like they were unprepared and didn't think they could win.

There were potentially quite large benefits to not supporting it. Tell May that "now is not the time" and push for an election closer to the end of the Brexit negotiation. That would have put here in a difficult position, unable to get her way and looking weak, the only option left to call to a vote of no confidence in herself.

Instead Labour decided to fight the election, perhaps because some in the party see it as an opportunity to get rid of Corbyn if they lose. It could also be a simple tactical error.

Not the answer you're looking for? Browse other questions tagged election united-kingdom .

8
What was the rationale for Jim Prentice calling an early election?
6
In a Westminster system, why would the PM voluntarily dissolve a majority government?
2
Is there a minimum time frame that a Prime Minister may set an early election for?
4
What explains the huge difference between UKIP's high-watermark in EU vs UK elections?
5
What are the main differences between UK and US (NEP) exit polls, methodologically?
5
By what mechanism was the 2017 UK General Election called?
10
What is the latest date a general election in the UK can prevent a no-deal Brexit
8
Is there any timeframe restriction for scheduling an early election under the Fixed-term Parliaments Act?
5
What happens if the UK government refuses to function or carry out its duties?
5
Can the Fixed-Term Parliaments Act be bypassed by a simple bill?