Is requiring removal of face coverings a violation of a persons civil rights?

After the attacks on 911, proper identification became important especially when boarding a plane or using other mass transit. Unfortunately, it is very difficult to identify someone whose face is completely covered. 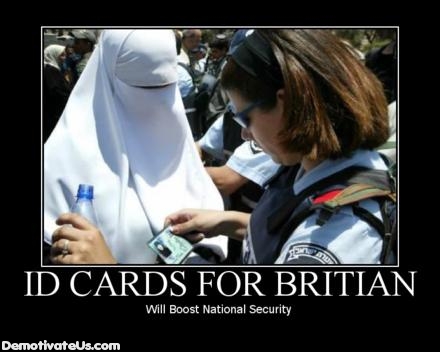 The ACLU claims that to do so though is a violation of the of the First/Fourteenth Amendments:

In obtaining drivers' licenses and otherwise engaging in civic life: Muslim women have been denied drivers' licenses unless they remove their headcoverings for the photograph.21 The same has happened to women seeking to obtain passport and NSA photos.

Is the ACLU correct?

Infringements on religious liberties can also be legal if the infringement does not target a specific religion. In the Supreme Court Case Employment Division, Department of Human Resources v. Smith, the courts ruled that bans on drugs used in religious rituals cannot be considered infringements on religious rights, because the ban applies to anybody who would wish to use the drug. A requirement that people expose their faces to the TSA or in drivers' licenses would likely be ruled constitutional by the courts because it doesn't target religious rituals or beliefs, but applies to anybody who might be covering his or her face.

The ACLU is not correct.

Having a Driver's License is not a right. It is a privilege. To gain that privilege you have to meet certain requirements. Those requirements are to pass a drivers test, have your face photographed and, in some states, you must be finger printed. You can even lose the privilege based on failure to follow various laws.

To be clear, in the USA you have the right to travel and use public roads. However, you don't have a right to drive a car.

First amendment is about religion. Can religion allow anything? No, religion is protected as far as it is not against the law.

But in the end that doesn't matter. It is about politics and not law or justice, this means it is about not upsetting people too much and finding compromise solutions to get some votes (as far as the lost votes are less than the obtained votes).

Religion could potentially support anything (it has supported all those things). Religion, law, justice and politics are four different things and independent to a great extent.

The other answers choose to ignore the specifics of the ACLUs complaint.

Requiring the removal of face coverings would in all probability not be a violation of civil rights, if this were required from everybody. ACLUs complaint is that the woman mentioned in the footnote was required to show her face, while others were not:

I cannot say if that claim has merit (it might be more tactical than be made in good faith), but it is a somewhat different claim than the question suggests. ACLU says she cannot be forced to do something that others do not have to do. They do not deal with the question if there was still reason for complaint if all people where treated equally. So ACLU might be very well correct, but they are not saying what the question suggests they say.

Arguably it is their body so they should get to choose what to do with it, such as choosing to show their face or not.

But on the flip side any shop owner, or plane pilot, or cab driver (or whatever else you might insert as an example) owns their "whatever-it-is" (plane/cab/shop) so they should as owners of their property be able to use it as they wish, including attaching requirements to it to be permitted to enter (such as "you must show your face before being allowed on my plane").

Not the answer you're looking for? Browse other questions tagged united-states religion islam fourteenth-amendment .