How could François Fillon recover in the polls after his financial scandals?

A couple of months ago I was wondering if Can François Fillon be replaced as candidate of The Republicans to the presidential elections? . He finally did not and he has been slowly but steadily improving his numbers in the polls since the end of March. 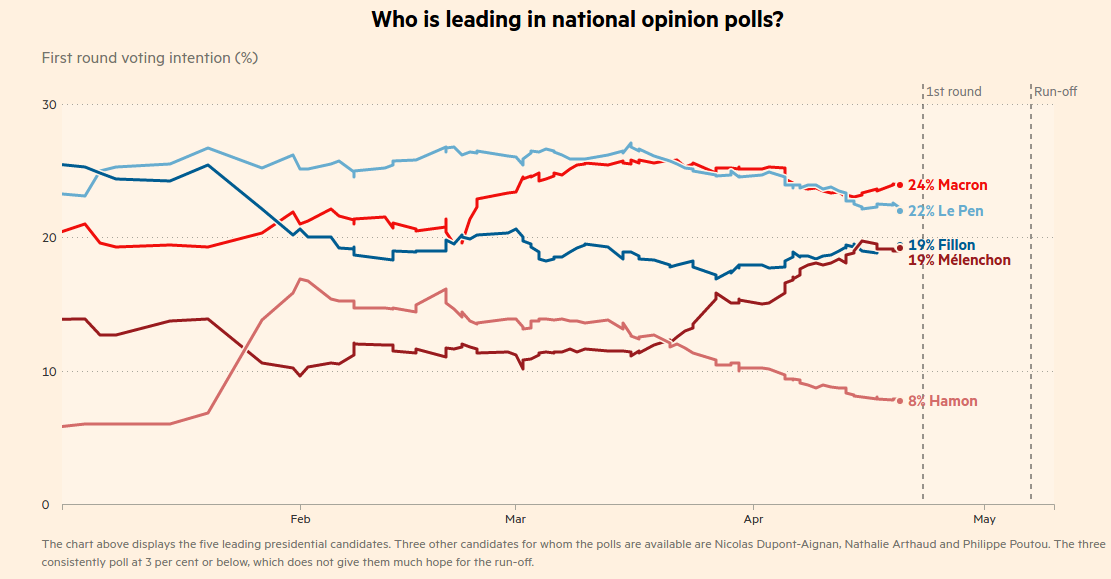 I am aware of him offering big rallies (François Fillon offers modicum of contrition in defiant rally address) and having support of the conservative, Catholic population that kept supporting him when things looked like he would resign as a candidate.

However, still I find it difficult to understand what were the key factors that kept him "alive" and why he is going up in the polls, to the point that he being in the 2nd round looked absurd one month ago and now it is possible.

Could it have to do with the rise on the polls of Mélenchon, making some conservatives fear him and decide to go for Fillon?

How could he recover ?

The "recovery" is not that clear, he did not go back to the level of support he had in january. At some point people spoke about him stepping down, but the support in the polls for him (or the replacement right-wing candidate) never went very low, as shown by your graph.

Could it have to do with the rise on the polls of Mélenchon, making some conservatives fear him and decide to go for Fillon?

As for why he still has support, this becomes more of a subjective question.

One reason can be the support for his ultra-liberal agenda. He did call for French people to support him, not to love him, which was a change in attitude. And he is still the candidate of an important party.

Another one can be the importance of the fraud he is accused of. Some other financial scandals concerning french politicians were to another level. We can compare his affairs (giving fake jobs to his wife and kids) to those of the 2012 right-wing candidate, Mr Sarkozy (money taken on sub-marine sale to Pakistan, Khadafi supposedly founding his 2007 campaign, taking advantage of an old rich woman, ...). Both the amount of money involved and the "moral context" are quite different. Reading the traditionnal press, one can infer that traditionally right-wing voters, while disappointed, are willing to forgive him.

As pointed out in the other answer, his age compared to the one of Macron could also be one explanation.

Regarding the support of the catholic population, I wouldn't bet on it. According to this article, only 5 % of French people regularly go to a mass, while about half claim to be catholic (less than half according to the latest estimates, 53 % in this article from a Catholic journal). Among those "catholics", 6% of them did take part in the anti-gay wedding demonstrations ("manif pour tous"), 73% did not want to take part in it. You don't get among them the 19 % of vote intentions of the polls. While Fillon brags about being fervent, this does not look like it has a big influence on his voters, for the simple reason that French people don't care that much about religiosity when it comes to politics.

Francois Fillon is the most experienced candidate of the lot.

I imagine that there are a lot of people in France (and elsewhere) that do not trust a politician younger than they are; when most of your life you elected older politicians, and now they see a younger generation coming up.

Not the answer you're looking for? Browse other questions tagged presidential-election france .

4
Can François Fillon be replaced as candidate of The Republicans to the presidential elections?

66
What significance could the information in Donald Trump's tax return have to his campaign?
1
How are some counties announced in US election before polls close?
2
Has Donald Trump explained changes in some of his views after the election?
4
Can François Fillon be replaced as candidate of The Republicans to the presidential elections?
1
How did Le Pen do better in the second round than in the first?
3
How can an unpopular French president be replaced before the next election?
4
What are the incentives for CFA countries to remain under France's financial umbrella?
5
Why does Biden show two trend-lines with his polls?
5
What happens if a candidate dies after the first round of French presidential elections?