To what extent do election polls affect the election results?

Has there been any rigorous research about what effect opinion polls have on the final election results? Do real life voters strategize their vote based on the polling averages?

I assume that there is a certain feedback loop between the voters' opinion and the voting polls, but I don't know how strong it really is in real elections.

Election polls definitely affect the election results, but the extent is debatable.

This study analyses how do polls influence voters' decisions by examining the impact of polls on the 1988 Canadian election.

The results shown in panel A of table 1 confirm that voters did respond to the information provided by the polls. The greater the Conservative lead over the Liberals in the most recent poll, the more inclined voters were to believe that the Conservatives had better chances of winning than did the Liberals. The same pattern held with respect to the Liberal versus NDP race. 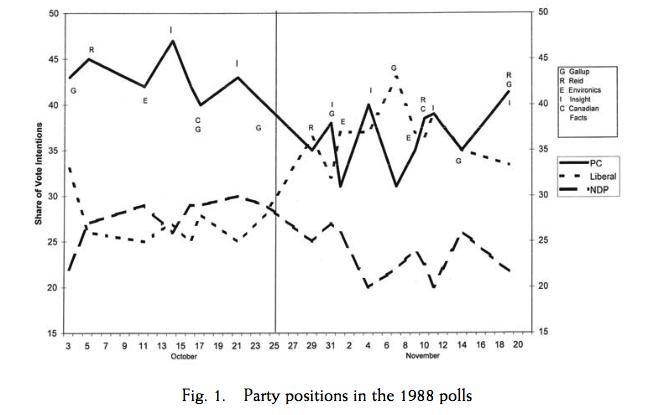 There is evidence of an interactive effect in the case of the Conservative/Liberal equation: it seems that among poll watchers, and only among them, the propensity to vote Conservative rather than Liberal was related to the gap between the two parties in the most recent poll.

All in all, there are good reasons to believe that the polls had an impact on the vote in the Canadian 1988 election.

Note: All text in block quotes are quoted from the study, Do Polls Influence the Vote?, and emphasis is mine.

There are basically 2 ways that polls can affect the results:

This would occur when supporters of a candidate consistently polls far ahead of his/her opponent, thus supporters may not turn out on election day to vote as they assume their candidate will win almost for certain. However, they turned out to be wrong and the race becomes closer than expected.

Without this poll, the candidate who's leading would have won.

An example may be the 2016 US Presidential Election in which Clinton consistently polled above Trump, thus Clinton supporters assume that it's a sure-win for her, resulting in a low turnout rate for Clinton1.

This is the opposite of the boomerang effect. Supporters would expect a race to be a landslide for a particular candidate, but polling showed that their challenger is improving in the polls and the election may be a close race after all. This would encourage people to be more inclined to vote.

Without this poll, the challenger would have won.

Also, a research published in 2012 showed that people are in fact influenced by polling:

The researchers asked a selected group of voters to state their opinions on a variety of real public policy questions, and then presented them with fabricated poll results on the same topics. When the test subjects learned that a large number of experts favored a position, opinions shifted by 11.3%. But the "opinions of people like me" changed opinions by just 6.2%, while a general poll saying that a majority of people favored one side or the other moved the needle by 8.1%.

This research is further elaborated in this Huffington Post article:

Researchers generally posit two psychological mechanisms underlying conformity: (1) people’s desire to adopt the majority position so as to feel liked and accepted or believe they share the prevailing opinions of their community (i.e., social acceptance); and (2) people learn from the “wisdom of crowds,” or assume that other people did the research so their collective wisdom indicates something about the quality of the candidate or platform (i.e., social learning).

polls reveal information about the likelihood of a policy passing or the election of a candidate, so people resolve cognitive dissonance (“Policy X is going to pass, but Policy X makes me unhappy”) by switching to the side they believe is going to win

1This source doesn't actually highlight that the low turnout rate is due to voters being affected by polling. Regardless, it showed that turnout was low.

Polls can cause people to become complacent or fear the success of another party. I shall give an example.

The polls before the 2017 UK general election predicted a huge win for the Conservatives. On the one hand it was thought some Conservaties felt there was no need to vote as they were likely to win anyway. On the other hand it galvanised the opposition. Historically the left wing are often less likely to vote but fearing a massive Conservative win incentivised many to vote this time. In addition, the UK has a first past the post constituency voting system. More than in other elections there was some level of cooperation by oppossition parties to tactically vote and back the most likely opposition candidate to be elected. In the same election in Scotland some Unionists feared that a clean sweep by the SNP as predicted by some polls might occur and legitimise a second referendum for independence and so many broke existing voting habits to vote Conservative. The result was that Labour, the main opposition party, did much better than was predicted in polls and the Conservatives did not hold an outright majority in parliament as had been predicted but performed much better in Scotland.

Sorry if this is a bit anecdotal, I am writing about this from memory, but there were several contemporary news articles that would similarly gauge the nation.

Not the answer you're looking for? Browse other questions tagged election polling .

9
Restricting polls because of the "Bandwagon effect"
5
Are there any methods that compensate for phenomenons such as Shy Tory factor and Bradley effect?
9
Does the release of real-time voting results affect voter behaviour?
4
Why are (public) political polls typically allowed even very close to the elections despite of their apparent disruptive effect on voters perception?
5
What are the main differences between UK and US (NEP) exit polls, methodologically?
36
What is the purpose of polls published by the organization that they are asking about which have leading/confusing questions?
2
According to political scientists, what, if anything, are the benefits of election polling to a liberal democracy?