How have greater than two party systems functioned in the past?

An earlier question (Why can't voting be fair if there are more than two alternatives?) got me thinking. Are there any examples of governments where more than 2 parties have had major roles in the government for a decent amount of time (a half century say)? And, if so, what (if any) impact has this had on the government and it's people.

The question I reference deals more with the theoretical fairness of having more than two parties, I'm more curious about the practice and its implications.

Yes, there are many such countries in Europe and they function very well.

Multi-party democracies are generally run by coalition governments. Usually, not a single party holds more than 50% of the seats in parliament as needed for decision-making. Therefore, two or more parties cooperate in a government, as many as are needed to reach the treshold of 50% of the seats. What parties can form a government depends on their programmatic differences. They might negotiate cooperation before, or only after the elections.

For example, in The Netherlands, people vote for a parliament consisting of 150 seats. At the Elections of 12 September 2012, 11 parties got at least one seat in parliament. The smallest party had 2 seats, whereas the largest two parties had 41 and 38 seats, respectively. By comparison, in the 2010 elections, the largest parties had 31, 30, and 24 seats, respectively. Not any combination works, because parties may have great difficulties to agree programmatically. In the Dutch system, the largest party gets the head of government and gets the initiative to form a government. After the 2012 elections, it took 54 days for the two largest parties (centre-left and centre-right) to form a coalition government. After the 2010 elections, it took 127 days to form a three-party right-wing government. During the negotiations, the previous government continues as a caretaker government.

Negotiations for coalition governments sometimes take a long time, because parties may be reluctant to give up electoral promises, particularly so soon after the elections. Yet this is often necessary, meaning there will always be disappointed people. This can be seen clearly in what happened to the two coalition parties in the opinion polls immediately after the government was formed: 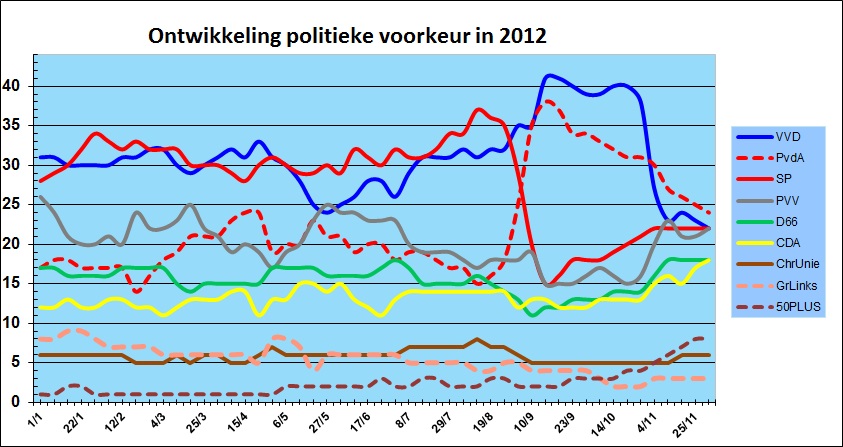 Dutch polls from peil.nl. The title reads "Development of political preference in 2012"

The elections were in September, just after the big rise of the social-democratic PvdA (red dashed line) and the big drop of the socialist SP (red solid line). The coalition programme was announced late October, just before the big drop in the liberal (in the European meaning) VVD. It can be seen that the publication of the coalition agreement led to a big drop in VVD and PvdA (the coalition partners) and a major rise in the nationalist-populist PVV (grey solid line) and a rise in several other parties.

This example is from The Netherlands, but most European countries are multi-party parliamentary democracies with similar (but inequal) systems. For example:

There are many more examples.

An entirely different question is how the president gets elected in such a system. This is independent of the question of the government, but usually such systems don't have a president as strong as the one in the US. For example, in Germany the president has mainly a ceremonial function and is elected by parliament, and Switzerland doesn't really have a head of state at all. France does, and in France the president and government may not be of the same political colour, and consequently be constantly fighting.

So, certainly multi-party democracies exist and are functioning to varying degrees. Stability may be less than in two-party systems, but that's not always a bad thing; it's relatively uncommon to see the same people in power for more than 8 years, new parties have a chance to introduce themselves into the political system, and minorities are represented when elections are proportional. In summary, it has many advantages.

Regarding the title question: By using some kind of proportional representation and an electoral threshold for it, but neither is strictly necessary.

The German Basic Law, for example, stipulates that federal elections determine the composition of the parliament (Bundestag), which elects from among its members the head of the government, called federal chancellor (Bundeskanzler). Also, each session of the Bundestag has to convene first 30 days after the federal election, and the Bundeskanzler's term ends when a new Bundestag convenes. There are provisions as to what happens should the Bundestag fail to elect a Bundeskanzler on the first attempt, but none of them were ever relevant even although only one federal election resulted in one party having an absolute majority.

In other words, the German government in all of the 17 sessions of the Bundestag so far consisted of a coalition of several parties (in 1957, the majority party kept one coalition partner from the previous session), but government formation always took less than 30 days. I think that qualifies as a functioning multi-party system, although one must note that there were always the same two major parties and a few smaller ones (sometimes only one, aligned with either of the larger ones at different times), and that four times Bundestag decided to dissolve early (after about 3 years instead of 4).

As for the "impact [...] this had on the government and it's people", well, the government is still reasonably stable and uses to stick sometimes more, rarely less close to the "coalition contact" agreed to in the days/weeks after the election (only twice did the ruling coalition change during a term of the Bundestag, and in one of these cases this lead to one of the aforementioned earlier elections). As for the people, to them it probably just seems to be the normal way to go about these things, and others seem at least mildly irritating, like the Belgian way of keeping the previous government around until the new parliament has maybe, somehow, sometimes month later agrees to form a new one (as mentionned in gerrit's more comprehensive answer), or the American way of marginalizing anyone with a position corresponding to the German liberal, green or left parts, or the Israeli way of everyone mildly disagreeing with his party on a few issues breaking away and forming his own party that also gains representation (not statements of fact, but perceptions of other systems not unlikely when one is used to the German one).

Not the answer you're looking for? Browse other questions tagged parties .

27
Why can't voting be fair if there are more than two alternatives?
5
Should politicians be bound to keep campaign promises?

2
Are single-member legislative districts a guarantee for two party systems?
15
Does any research suggest that two-party systems lead to convergence of platforms, divergence, or otherwise?
16
Why is proportional representation not considered in any of the US states?
6
Do European Parliamentary leaders have greater standing in their own parties than American Presidential candidates?
6
Are there examples of “guerrilla politics” being effective in an European country?
1
Were three-line whips more (or less) common before the Fixed-term Parliaments Act?
34
How far can gerrymandering go?
3
Is the transferable medallion system backed predominantly by a political party (or wing thereof)?
9
What has been the historical trend of U.S. congresspeople voting as blocks?
8
How many times have the two US parties switched sides?