As explained by Wikipedia:

NIMBY (an acronym for the phrase "Not In My Back Yard"), or Nimby (as a word, instead of an acronym), is a pejorative characterization of opposition by residents to a proposal for a new development because it is close to them (or, in some cases, because the development involves controversial or potentially dangerous technology) often with the connotation that such residents believe that the developments are needed in society but should be further away. The residents are often called Nimbys and their state of mind is called Nimbyism.

Are there cities/countries which successfully deal with this problem, without violating basic principles of democracy? E.g. perhaps some countries delegate controversial projects to a vote by the state legislature, rather than allowing the city residents to vote directly?

The only real solution to NIMBYism is to move power from local towards national levels. Otherwise, you get... well... democracy.

People want their political system to improve their own lives, and to represent their own interests. At a city or neighborhood level, increased development means higher density, more people, slower traffic, slower property appreciation, and the like. Why would they be for that?

The solution, of course, to move the political decision-making to a level at which both the problems and solutions have to be considered together, and for which reasonable trade-offs can be made.

The more local the decision-making, the more likely NIMBY considerations will come to prevail. Politics is all about trade-offs, and if the decisions are made where countervailing interests don't have to be considered, they won't be.

There are couple of examples i can give from Turkey:

Most of these projects are still contested by the locals, but probably will be carried out. Most of the time the way to deal with locals is to promise them jobs in the projects. With high levels of unemployment, this becomes attractive especially to youth. In an ideal system if this doesn't balance out the impacts of the project in the community, we would expect the annulation of the project.
However most of the time, in a law dispute, private companies have a very strong lawyer team that works things out, mostly by convincing locals to accept a certain amount of money for their expenses. This almost never cover the expenses of the locals though.

If it is the state that proposes the project, depending on the national benefit of the project, we can observe an annulation to deportation of locals to some place else. The deportation almost always ends up in misery, because one doesn't really notice it in urban areas but in rural areas where you live really matters and it determines one's way of life, you loose your place, you loose your way of life. This has happened in the construction of the dams in the south-east of Turkey. Even some archaeological sites went under the water, but the dams created the necessary infrastructure in order to farm the land for later generations.
I honestly believe that proposing jobs or a privilaged access to jobs and improving overall infrastructure of the locals (schools, hospitals,etc) is a reasonable way to convince people, when, of course, the project doesn't involve any health consequence in the long run, as in the case of gold mine project in Erzincan or plantations.

After doing a lot of reading about this since 2017, the answer can be broken down into two groups:

The table above is sourced from the Japanese Ministry of Land which showcases their zoning logic:

This still means that there are areas in Japan that are exclusively reserved for single family homes but those are not dominating Japanese cities. Japanese real estate costs remained relatively stable since the 1980s bubble burst: 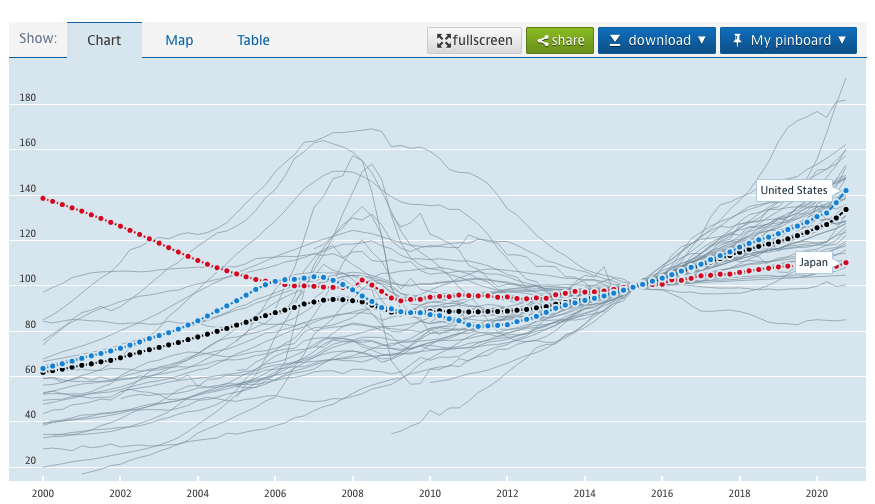 Since the year 2000, Japan's housing price index dropped from 138 to 110. Meanwhile in the US they've increased from 63 to 142. Its not apples-to-apples comparison as Japan's population is shrinking while America's is growing but overall Japan somehow managed to avoid the rapid increase in housing costs over the past two decades.

In the UK, for housing, the central government tells local authorities how many houses (at a minimum) they must grant permission for, but they can then decide where in their area those houses can be built. That seems to strike a reasonable balance between meeting national needs and allowing local democracy, although of course it’s not feasible for large one-off projects. And it’s only partially successful — the UK still doesn’t build enough houses.

In England and Wales, a central government agency, the Planning Inspectorate, adjudicates on so-called Nationally Significant Infrastructure Projects. The system was set up under the Planning Act 2008 for controversial projects that were deemed nationally important such as airports, major wind farms, and nuclear power stations, with the expansion of Heathrow Airport one reason for its creation (see the Wikipedia pages I link above for more details).

This removes planning decisions from local government, reduces consultation requirements, and attempts to speed up the process by imposing time limits. Initially it gave powers to an independent commission, but in 2011 an amendment gave central government more control.

It has arguably worked for some projects, such as the Thames Tideway sewer tunnel, although Heathrow Airport still isn't any bigger, and especially in early years very few scheme were even submitted (2 in the first year, one of which were rejected).

Not the answer you're looking for? Browse other questions tagged policy city-planning housing citizen-activism .

7
What benefit does Ireland get for the tax policies that faciliate the "Dutch Sandwich"
3
What public policy justifications exist for giving school boards direct authority over Charter School staffing?
1
What controls, organizations, or mitigations are there that limit or reduce bribery in politics and policing?
1
What are the practical and effective feedback mechanism that normal citizens can use to present their views to the government?