Why doesn't the US suppress the use of Spanish, similar to how France enforces its official language?

Looking at the Spanish language distribution in the US one can see that English is slowly losing its dominant status in the southern parts: 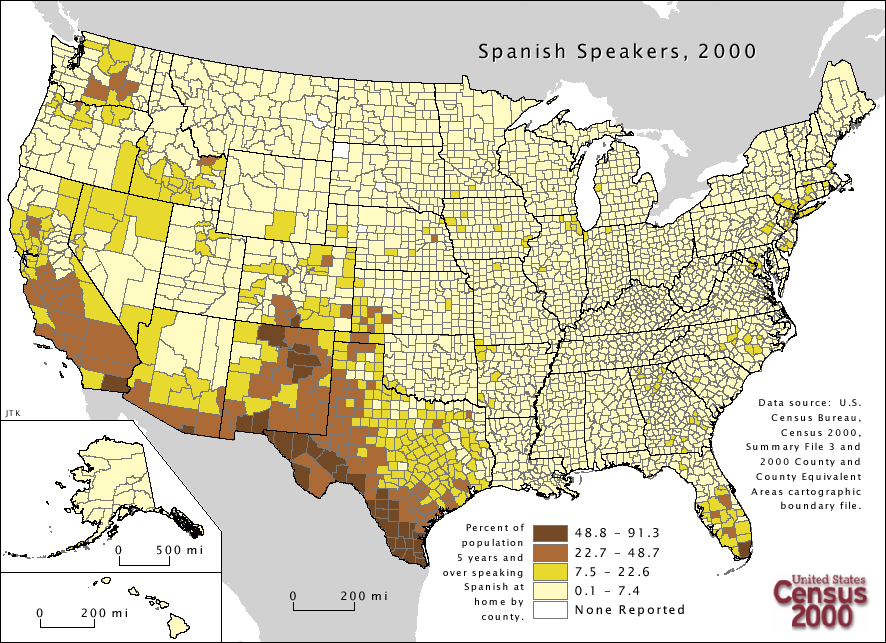 So why don't American politicians attempt to restrict the use of Spanish and promote English instead? Are there any government plans to attempt to reverse the hispanicization of the US? For an example of language enforcement in France, see this Wiki article about the Toubon Law.

While the U.S. may not do much in the way of official support of English there is a huge amount of soft pressure created by trade dominance, tourism, the internet, etc. The current political climate also limits to a small degree what the U.S. could do to support English without being labeled xenophobic, Racist, Imperial, or otherwise criticized.

Not the answer you're looking for? Browse other questions tagged united-states languages .

6
What are the greatest factors preventing the choice of a an official world auxiliary language?
12
If Puerto Rico votes to become USA's 51st state, what effect would it have on Spanish being the primary official language?
50
Will English be dropped as an official/working language of the EU after Brexit?
10
How do leaders cross the language barrier during phone calls?
4
How proficient is Leo Varadkar in the Irish language?
2
Why wouldn't EU recommend Baltic states and Ukraine to give Russian language the official status?
9
Can people use the Maori language instead of English for New Zealand citizenship?
8
Why isn't English the official language of the US but it is necessary to know it to become a citizen?