Why is India branded as not a very liberal country? [closed]

Ask Question
Asked 3 years, 8 months ago
Active 2 years, 3 months ago
Viewed 569 times
5
Closed. This question is opinion-based. It is not currently accepting answers. 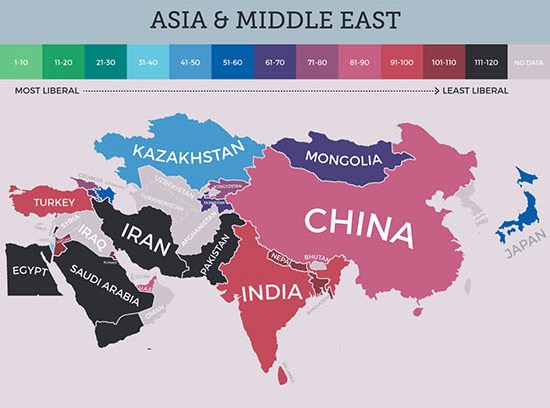 Despite being a democracy for 70 odd years, India scores low in many social rankings. Some examples:

In this article, India is described as not a very liberal country. What are the reasons for the absence, or rather, slow growth of social equality in India?

According to your link:

Using data from the World Economic Forum’s Global Gender Gap Report 2016, the 2016 Social Progress Index report and Yale’s Environmental Performance Index 2016, MoveHub has created a completely unique list of the most liberal countries on the planet. To create the rankings MoveHub selected data from three reports that look at factors such as gender equality, the rights of minorities, personal safety and environmental factors such as soil, air and water quality.

So they seem to be using liberal in the United States sense (left wing), not in the European sense (center-right). So being capitalist may not help them.

You may be able to find more detail in the PDF reports.

I find the following quote interesting:

If you, like so many people in Trump’s America or post-Brexit Britain feel disconnected from your fellow countrymen and unsure about your future in your current country of residence and want to consider your options, do not worry, because MoveHub has compiled a list of the most liberal countries you could move to in 2017. Your liberal utopia is just a few clicks away...

Number ten on their most liberal list is the United Kingdom. I'm not sure that they've thought through their propaganda if they recommend moving out of "Britain" and to the United Kingdom's "liberal utopia". What's that mean? Northern Ireland?

19
How did the term “Liberal” become “Progressive”?
8
Why is Jeremy Bentham considered Liberal?
5
Why is India called the biggest democratic country?
9
Is the Left-Right divide applicable everywhere, especially in India?
4
Are there any countries that can be said to be truly liberal, in the sense of only having a very minimal state?
6
Why is India gradually becoming a Hindu country?
65
Why are Weapon Restriction Laws considered Liberal?
2
Why is the President of India not elected directly?
5
Why is “PMO Cares” in India not under Right to Information?