In the UK Parliament, the 2015 election results for party leaders going into the 2017 election were:

However, in the Scottish Parliament, the 2016 election results for the Conservative Party leader is actually very marginal: 30.4% for Ruth Davidson, with the second party, SNP, at 28.6%. Chance of unseating significant.

Is there any pattern in which party leaders in UK parliaments are typically from safer seats than average MPs?

I've approached this question by looking at the General Election before each party leader attained their post, for Westminster party leaders of the Lib Dem, Labour, & Conservative parties selected since the 1992 GE. I then look at the distribution of 'percentage majority' among MPs of the same party, and find the percentile in which the leader appeared. After collating these results, I have then tested the null hypothesis that the percentiles come from a uniform distribution - i.e. that majority compared to the rest of one's party has no correlation with election as leader.

For example, to get Boris Johnson's score, I look at the distribution of Conservative MP's percentage majorities in the 2017 General Election. I then find the percentile score of his ~10% majority, approximately 23.3. 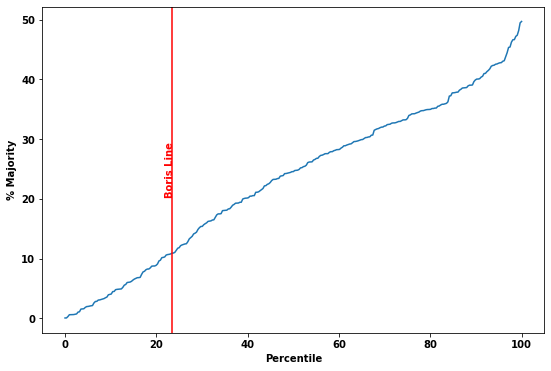 The results are below:

A Kolmogorov–Smirnov test of these percentiles against a uniform 0-100 distribution gives a p-value of ~ 0.002, so we can reject the hypothesis that 'safe-ness of seat' compared to the rest of one's party has no correlation with selection as party leader. This is illustrated quite nicely by the box-plot below:

These results suggest that party leaders are typically drawn from safe seats. Of course, correlation doesn't necessarily mean causation; MPs could hold large majorities due to their own personal qualities, which also make them successful leadership candidates. Note also that just because a seat is safe compared to the rest of one's party, it doesn't mean that it is safe in general - notably, Jo Swinson had a seat in the 91st percentile of safe-ness compared to her party, but then lost her seat in the 2019 GE.

This is a question which we can attempt to get some figures for. Limiting ourselves to the Conservatives, the Liberal Democrats and the Labour party (since the Greens, the Northern Irish parties and the Nationalists all have broken sequences) the last 6 elected leaders had the following vote shares on accession:

If we look at the 2010 general election results, we can see that 116 MPs (from 649 excluding the speaker) got a higher vote share than the average Conservative leader, versus 48 for the Labour leader and 277 for the Liberal Democrat leader. So, this paints a fairly compelling narrative that party leaders are more likely to hold a safe seat than your average MP.

On the other hand, looking at the 2010 data, half of MPs were elected with a majority of 20% or more, so it's not like there aren't a lot of safe seats out there.

Not the answer you're looking for? Browse other questions tagged united-kingdom parliament parties .

5
What are the practicalities of having a non-MP as your party leader?
5
Is there a danger for democracy when a party gains more than half the seats in a parliament?
13
What are the legalities of forming a party with a misleading name?
4
Is there a precedent of an European Party from European Parliament excluding a member party in the last 20 years?
10
What is the point of Germany's 299 “party seats” in the Bundestag?
3
Brighton Pavilion and the Green Party
5
Is it unprecedented for a party to nominate someone from an opposing party to the House of Lords?
13
Has a former UK party leader ever been expelled from their own party?