How did political participation change after Watergate?

Was there any notable change in political participation after Watergate?*

If there were changes, were these more noticible within a particular party or level of government and to what extent are the changes attributable to Watergate?

* I'm thinking of metrics like voter participation, party membership, candidate recruitment, donations, willingness to work in civil service or the legal profession, etc., but I'm not sure what metrics are actually relevant or are used by experts, so I defer to the answers and their references for how to measure this.

This answer lists some of the statistics and metrics used to measure political participation.

Conventional participation: Activities that we expect of good citizens. For most people, participation occurs every few years at election time. People strongly committed to politics are more likely to participate on a regular basis.

In the 1976 presidential election, voter turnout dropped 1.6% which isn't really significant. However, the number of voters who voted for the Republican candidate decreased by approx. 8 million while those who voted for the Democratic candidate increased by approx. 11 million. This shows that there's a huge swing towards the Democratic Party which is largely attributed to the unpopularity of Nixon and unhappiness that Ford pardoned him.

According to the Voter Turnout and Congressional Change article by Pew Research Center, it mentioned that the Watergate scandal might have caused Republican voters to sit out in elections.

Another way to produce a big change in Congress is a “one-party collapse,” where a huge number of voters from one of the parties simply sit out the election. That is what happened in 1974, when the dispiriting backdrop of the Watergate scandal led to a nearly 3-million vote falloff in the Republican House vote from 1970. The Democratic vote grew by barely 1 million. But the GOP drop off was so severe that it cost the Republicans nearly 50 House seats. 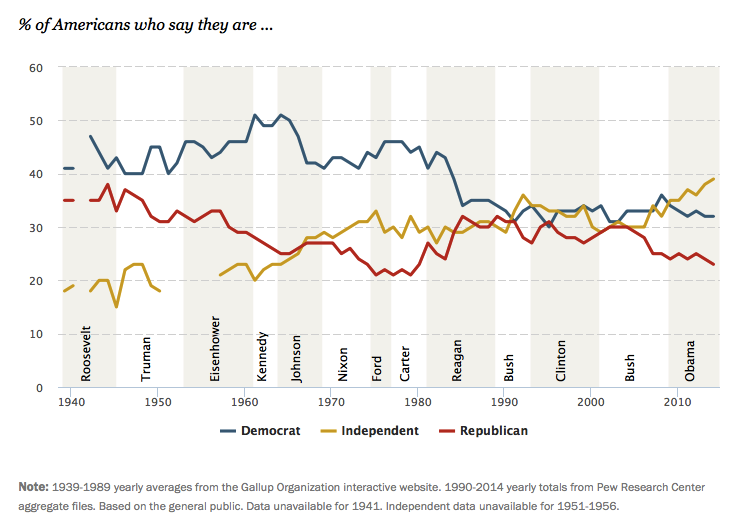 Donations seemed to have dropped for both parties in the 1976 presidential election. However, this might be due to new laws created by Congress in 1975 to regulate the finances of presidential campaigns.

There are very specific laws governing how a campaign itself can raise money, which are enforced by the Federal Elections Commission, created by Congress in 1975 as the enforcement/compliance mechanism for campaign finance laws. As laid down by the FEC, corporations may not contribute to campaigns or national party committees (i.e., the Republican Party), and individuals are limited to $2,500 per candidate. The laws are similar for contributing to national party committees, although the personal limit is much higher, (currently) $30,800. And no, these personal donations are not tax deductible.

Many of the changes in political participation don't seem to be permanent. Many of the statistics and metrics showed that participation seemed to rebound in the 1980 presidential election and beyond.

Some guess that this means Watergate depressed turnout. However, I don't know of any actual polling on that. It would have been difficult to do, as you would want to poll the people who did not vote. So one either polls everyone and asks or has to delay until the people who voted can be identified. Even then, one has problems like the inability to count people who do not register to vote because of disillusionment with the system.

It's a reasonable hypothesis that Watergate caused lower turnout, but there isn't a lot of data supporting that. It would also be reasonable to think that any Watergate effect would fade over time. But whatever happened was more lasting. It could be two effects. One that applied in 1976 and another that lasted longer.

A possible source of a long term effect would be an increasing minority population as a share of the overall population. Minorities like blacks and Hispanics have historically had lower turnout (although black turnout exceeded white turnout in 2012 and some estimates say 2008 as well).

Not the answer you're looking for? Browse other questions tagged united-states voter-turnout watergate .

8
How did the US approval ratings in the Middle East change over the last two decades?
4
When and why did Trump publicly change his attitude towards Comey?
11
Why did Richardson and Ruckelshaus resign during the Watergate "Saturday Night Massacre", rather than simply refuse?
4
How to change states in US voting registration
2
Why does US have such a low score for "Political participation" factor inside the Democracy index?
2
What did Ted Kennedy mean when he referred to "the muck of Irangate" and "the muck of Watergate"?
20
How did the US bring down federal debt ratio after World War II?
7
Is there any correlation between the effective number of political parties and democratic participation?
25
Is there an operating political system in which an election can be invalidated because of a too little participation?
3
How did FDR upend the political climate in the USA?