What is Trump's plan to get the United States out of trillions in debt?

The debt is now close to 20 trillion dollars.

What are Trump's main strategies to reduce this debt?

The simple answer is... there isn't one.

A lot of this has to do with what the budget is spent on, and most of it is considered sacrosanct. Here's a Federal Budget Breakdown

So... you want to reduce the deficit? The problem is that a lot of the "obvious cuts" would come from the "Everything else" category. In other words, you've got, at best, 6% of the budget, where not everyone would complain in cuts. 59% is spent on social programs that pay people directly or indirectly. Those won't be popular to cut.

This isn't a unique problem. A lot of this comes from overpromising what social programs can do, while not bothering to fund them. Many states are facing that same crisis now, with pensions that are woefully underfunded. As such, it seems unlikely Trump will cut any social programs

Trump’s budget, released Tuesday morning, looks to protect the older whites vital to his electoral coalition by exempting both Medicare and the principal Social Security retirement program from any cuts: About 80 percent of today’s seniors are white, and Trump carried about three-fifths of white seniors in last fall’s election. In stark contrast, the budget focuses large reductions on domestic discretionary-spending programs that invest in the productivity of future generations, including scientific research, education, student loans, and the Children’s Health Insurance Program. In those ways, the budget displays a clear preference for the predominantly white senior population over the rapidly diversifying youth population: As I’ve written, it strongly favors the “gray” over the “brown.”

Since he's unwilling to touch the largest parts of the budget, cutting the deficit, let alone producing a surplus, seems highly unlikely.

Short term, his plan is raise the deficit which will continue to increase the debt significantly. The problem is, to pay down 20 trillion in debt, that requires a whole lot of surplus years and the US rarely operates with a surplus. It's also anticipated that with the baby boomers retiring, running a surplus is not expected in the next several years at least.

It's worth pointing out that there's a few ways to look at debt. Increasing GDP so that the debt is a smaller percentage of GDP has been argued as a method of paying down the debt. I don't think it's a good method because recessions murder that strategy and recessions, in my opinion, can't be avoided. It's not possible to maintain high GDP, contrary to what might have happened in the 1950s and 1960s - that was a different time.

It's also possible to address the debt by reducing but not eliminating the deficit. If the debt is currently 20 trillion and the deficit is reduced to 100 billion per year (counting interest on the debt, of-course), then in 50 years, the debt will be 25 trillion, in 100 years, 30 trillion. That's a real scenario where inflation should overtake the debt. It's a slow approach, but not unreasonable. Not many people realize that, but a significantly reduced deficit, even without a surplus, in time, would make the debt smaller at least, adjusted for inflation, even without paying it down, it in effect would grow comparatively smaller with a small enough deficit. But for now, our deficit isn't even close to that.

It's possible, if GDP grows fast enough to decrease the deficit and/or debt while decreasing taxes. It's unlikely and while it's often suggested as a campaign promise that growth will reduce the deficit, it almost never turns out that way and it's rarely (perhaps never) backed up by the congressional budget office.

That tends to be highly unpopular, so it's a long term game plan. Perhaps later on, maybe when they get another surge of senators or when there's a democrat in the white-house who can share the blame. All this is a future plan talk, not current plan.

Politics in America is one battle at a time. Trump's current battle will increase the deficit because he wants to cut taxes. I don't think he's even formulated a strategy on reducing mandatory spending. If he has, he's not shared it publicly. When politicians say "cut social security" or "cut medicare" they get killed in the polls and future elections, so very few say it. Paul Ryan has said it, and a few others, but it's rare.

Maybe his plan is to leave it for the next president. Or, assuming he wins a 2nd term, begin to address it around year 7. The unspoken truth is that there are democrats in Washington who recognize that entitlements are a real spending problem that needs to be addressed. Both sides see it, but it's a hot potato to do something about.

With low interest rates, the deficit is manageable and it can be addressed in the future. At current deficit rates, it won't stay manageable, but it's still easier for both parties, to push cutting entitlements down the line.

The big difference between the parties is the democrats want to increase taxes on the wealthy side by side with maybe, possible, at some point, enacting rarely discussed, future entitlement cuts and the republicans want to take a much bigger bite out of entitlements and cut taxes.

The elephant in the room (if I haven't made this 100% obvious) is that nobody wants to suggest it first. Everyone in Washington wants to "defend" social security and medicare in appearance, even if making cuts to entitlements is something that many politicians on both sides agree that it will need to be done.

But it should be stated that Trump very well might have no plan at all. I'm simply assuming that he shares the far-right approach of eventually cutting entitlements to address the debt.

And, Anyone who tells you that tax cuts will lower the deficit has failed basic math.

As a sidebar, while 20 trillion sounds like an insurmountable number, with low interest rates, the debt is a lot more manageable and could be addressed over a long period of time. The trick is getting started. To get an idea what 20 trillion feels like, the nation's total wealth fell about 20 trillion during the mortgage crisis. It's since rebounded more than that most of the money collecting in the top 1%. Our nation certainly has much more than 20 trillion net worth so the nation isn't broke. The government is just running on a boatload of borrowed money.

The hard part is working towards a balanced budget that both sides agree on. It's easier to tax less and spend more. That's not news. The real trick is responsibility and getting the budget balanced. Then slowly chipping away at the debt.

ugg - that's much too long. Somebody write a shorter, easier to read one please.

First, government debt and private debt are not the same. Many armchair critics fail to recognize this to their detriment. The United States cannot go bankrupt unless it chooses to. The U.S. government issues debt in its own currency.

Trump has no plan to reduce the debt or the deficit.

He doesn't even have a coherent economic policy. No surprise there, he kicked the head of the Council of Economic Advisors off his cabinet before filling the position.

See this issue of The Economist.

America has run current-account deficits—which are substantially driven by the balance of trade—almost every year since 1982.

America still takes in more income from its investments abroad than it pays out.

Trump claims balancing trade, cutting taxes, and encouraging business investment will create jobs and increase growth, but this is wrong because government deficits and investment booms drive trade deficits up.

Not to mention much American investment in American firms will obviously be in automation, which will incur additional job losses. 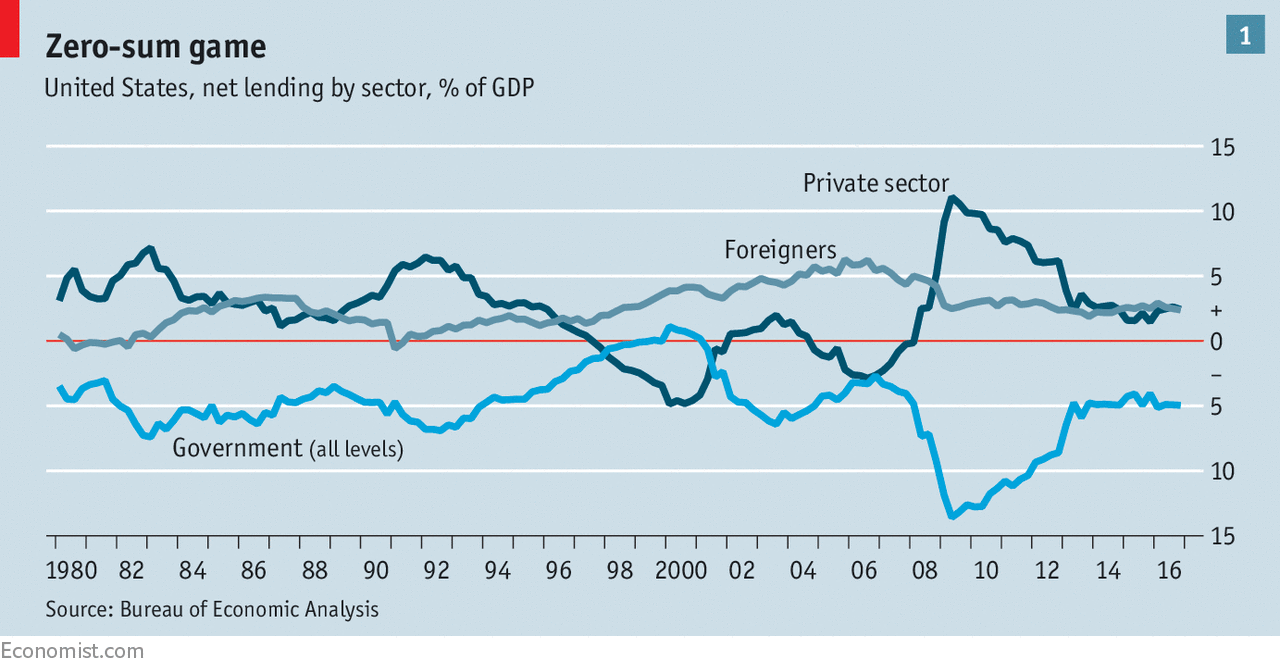 3
Why do US Republicans continually go after cuts to Medicare, Medicaid, social security?

25
How would the trillion-dollar coin save the United States' economy?
9
Is it true that the United States currently has no debt ceiling?
10
What are the stated downsides of allowing to default on college loan debt?
59
What will happen if China stops loaning money to the U.S.?
50
What are the downsides of being a debt-free country (no foreign national debt)?
30
Why does the United States federal government have a debt ceiling? Isn't it entirely redundant to the budget?
34
Why first world countries have astonishing amount of foreign debts, but third world countries don't?