Is there a legal way to postpone or call off a general election in the UK due to concerns one way or another?

I'm asking this as a follow up question after this one when Steve Melnikoff raised an interesting point in the comments as to whether there was a legal mechanism to postpone or call off a general election in the UK.

So can the Prime Minister call off or postpone a general election one way or another?

It's legally impossible to postpone the election without changing current laws. However, Parliament has been dissolved and thus laws cannot enacted or changed.

The two parliamentary acts that determine the date of the election — the Fixed Term Parliaments Act 2011 and the Electoral Registration and Administration Act 2013 make no mention of delaying the election.

Section 2 of the Fixed Term Parliaments Act 2011 states that:

If a parliamentary general election is to take place as provided for by subsection (1) or (3), the polling day for the election is to be the day appointed by Her Majesty by proclamation on the recommendation of the Prime Minister (and, accordingly, the appointed day replaces the day which would otherwise have been the polling day for the next election determined under section 1).

And the Queen has proclaimed the election to be held on June 8th: 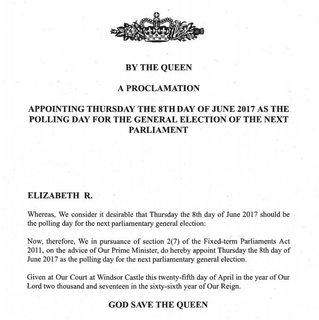 Also, the Brexit Minister David Davis mentioned that the current laws have to be changed by Parliament. However, Parliament has been dissolved which makes it impossible to enact any new laws. Thus, the date of the election cannot be changed.

The Brexit Secretary suggested that, to change the date of the election, the current laws would have to be changed and that was likely to be impossible because there are currently no MPs and no parliament.

As quoted from the official UK Parliament website, business in Parliament will cease when it is dissolved:

MPs are allowed access to Parliament for just a few days in which to remove papers from their offices. The facilities that the House provides for MPs in Westminster during a Parliament are no longer available to them from 5pm on the day of dissolution.

Members of the House of Lords retain their positions, but all business in the House comes to an end when Parliament is dissolved.

Not the answer you're looking for? Browse other questions tagged election united-kingdom democracy parliament .

9
Can a General Election be called by a new Prime Minister?
31
What is the point of asking the Prime Minister about their engagements for the rest of the day?
5
Would a Government who lose the confidence of the House really delay an election until after the event over which that confidence was lost transpires?
17
Does “government” mean something different in British and American English?
1
Were three-line whips more (or less) common before the Fixed-term Parliaments Act?
8
Is there any timeframe restriction for scheduling an early election under the Fixed-term Parliaments Act?
14
Why does the UK Prime Minister need the permission of Parliament to call a general election?
3
Why would Boris Johnson not try to call an early general election by 'ordinary law' at this point?
5
Would this use of *nobile officium* be a separation of powers violation?
2
Can a Prime Minister be appointed if they do not have a seat in the Parliament?