Who can fire the special counsel appointed by the Justice Department?

There have been unconfirmed speculations that Trump might fire Special Counsel Robert Mueller who was appointed to investigate “any links and/or coordination between the Russian government and individuals associated with the campaign of President Donald Trump.”

So, can the President fire the special counsel, if not, who can?

Let me go into a little more detail than Panda's (excellent) answer.

In the past, presidents have fired special prosecutors/counsels for various reasons; the laws governing the special counsel explain some of the reasons that Attorney General could do so (§ 600.7), and these were presumably also possible reasons for a president. However, this presidential ability was changed in 1999, two decades after Nixon's Saturday Night Massacre, a mass firing which has already been suggested as a precursor to some of Trump's actions.

The Attorney General, Jeff Sessions, has recused himself from relevant matters, so things now fall to Deputy Attorney General Rod Rosenstein, who is the Acting Attorney General with regards the Russian investigation1. Rosenstein himself - not a subordinate, not a superior (unless Sessions undoes his recusal somehow) - must make the decision. While he is in office, he is the sole human being with this power.

All of this, by the way, would involve intense public backlash. Trump is still under criticism for his firing of former FBI Director James Comey, and another set of firings would not improve his credibility . . . and draw more Watergate comparisons. 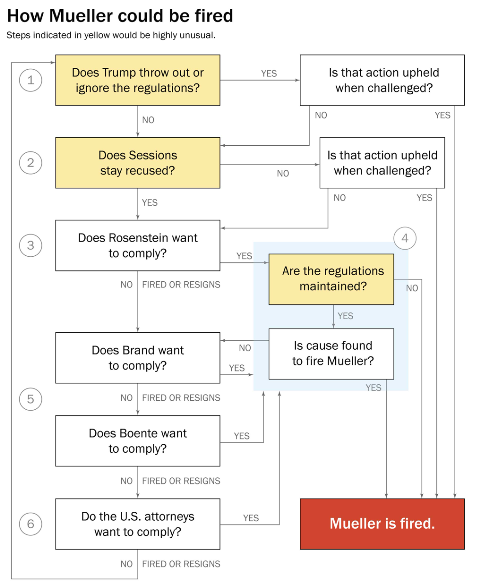 To answer the question directly: Only the Attorney General or Acting Attorney General can personally fire the special counsel. However, Trump can either ignore the laws or fire those who will not do as he wants.

1 Questions from the Senate Judiciary Committee confirm that Rosenstein is the Acting Attorney General for the Russian investigation after the recusal by Sessions.

No, only the Attorney-General can fire the special counsel.

However, Attorney General Jeff Sessions has previously recused himself from any involvement in the Russia investigation, so the Deputy Attorney General Rod Rosenstein will be able to dismiss the special counsel.

Sessions previously recused himself from any involvement in the Russia investigation due to his role as a prominent campaign adviser and surrogate.

So that would leave such a decision to Rosenstein, who just appointed Mueller on May 17 to oversee the federal investigation into Russian interference in the 2016 election.

The short answer is yes he can legally fire the special counsel and any person who falls under the Executive Branch, of which he is the head. He cannot be charged with any crime or can anyone with police powers come and arrest him.

That being said, it would be politically impossible for him to fire this special counsel under these specific circumstances because Congress (a seperate entity and equal in power) can impeach the president for anything that has political traction.

Let me explain: It is not like us none-Presidents. If you or I commit a crime, the police arrest us and then with are tried and if convicted punished. However, Congress, with the powers from the constitution, can initiate impeachment proceeding for any rule they themselves create. This is without consulting the President.

Many news articles give the impression through their tone and headlines (although I have yet to find an article that does not contain the truth, sometime in the second to last paragraph) that the special counsel can slap the handcuffs on the President and then perp walk him to the booking office. If you don't believe me, look at history. It has never happenned. Including with Nixon.

To summarize: the Special Counsel is an employee of the Executive Branch and works at the pleasure of the President. Firing him would give political points to Congress which could lead to impeachment.

Because of all the back and forth in the comment I wanted to add the source for this answer.

History: The office of attorney General can be traced back to an act of Congress during the Presidency of George Washington. The AG was to be a cabinet level appointment that directly reported to the President under Article 2 Section 2 of the constitution with the intention of helping the President and Congress with legal advice. It grew to the current bureaucracy in several stages throughout history in order to help the president enforce laws and maintain prisons for the punishment of federal laws. In order to deal with this extensive bureaucracy regulations were codified (CFRs) which included provisions for special counsels. Special counsels can "discover" matters for which Congress or the President need advice on. Historically, President Nixon fired the special counsel who was discovering things about him. He did it by ordering the AG to do the firing though he could have done it directly (And yes, he went through 3 AGs until Bort did it) but what difference!.

Not the answer you're looking for? Browse other questions tagged united-states president special-prosecutor .

10
Have previous presidential campaigns been investigated by the F.B.I for ties to foreign governments?
5
How much authority does a special counsel have?
8
Do DOJ regulations prohibit a Special Counsel from indicting the President?
9
What is the line of succession in the Department of Justice?
4
Is Donald Trump under investigation by special counsel Robert Mueller?
9
Who takes over oversight of the Russia investigation if Jeff Sessions resigns or is fired?
4
Can the US President fire someone who works in the Justice Department?
3
Was the Walsh special counsel report (on the Iran Contra) released completely uncensored?
3
Has John Huber interviewed any witnesses in his review?
7
Is there evidence that the Mueller Investigation looked into Trump's taxes?