Does the UK electorate become more likely to vote conservative with age?

Using the General Election 2017 as an example, YouGov believe that Young people voted for Labour whereas the older generation voted for The Conservative party. 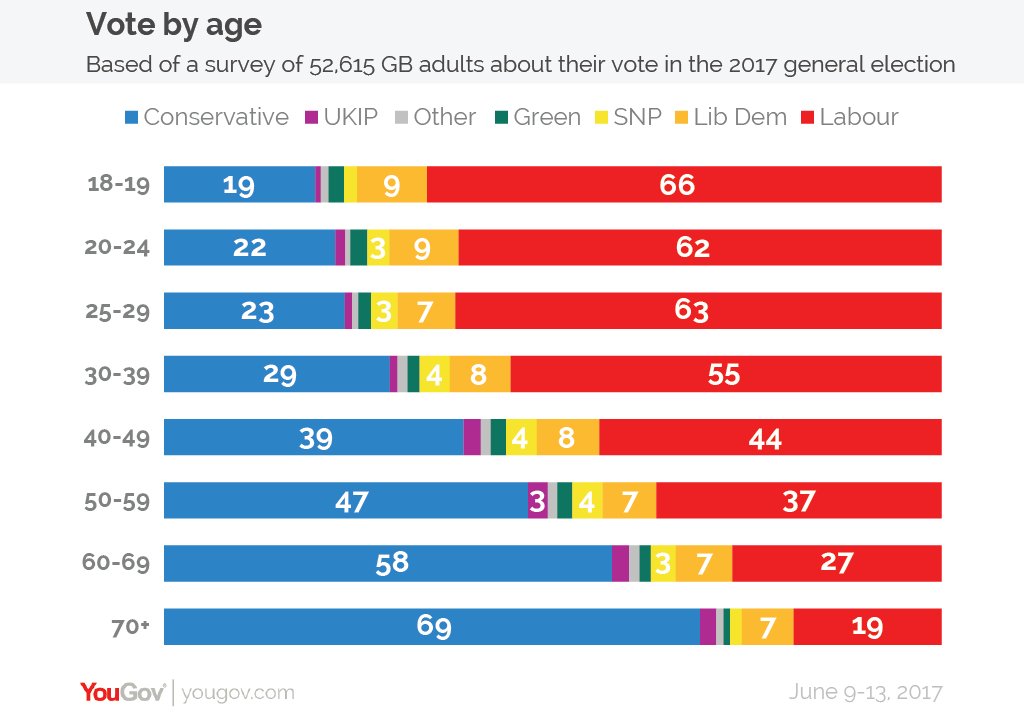 It seems to me that from the most recent election this could be true, but I'm looking for history to tell a story and I can't seem to find any hard evidence/studies of this demographic.

Note: These assumptions are based solely on the most recent election in the UK.

Does the UK electorate become more likely to vote conservative with age?

The UK has a secret ballot, so it's impossible to get "hard evidence" of how everyone actually voted. The best you can do is ask a representative subset of voters, as YouGov did. High quality opinion polling is the gold standard of data for voter breakdown by age, party support, and other criteria.

We can conclude that yes, older voters do skew more conservative than the general population.

Not the answer you're looking for? Browse other questions tagged united-kingdom voting public-opinion demographics conservative-party .

4
Does year of birth, or age, influence opinions on the atomic bombing of Japan?
1
What criteria need to be met to become a Conservative MP Candidate in the UK?
2
Any survey-based analyses of "why you voted that way" for the 2017 UK election results?
18
In the UK Conservative party, what happens when a vote of no confidence in the leader fails?
6
Did only retired people vote in a majority for the Conservatives in the UK 2017 General Election?
3
Can a foreign citizen cast a vote in the UK Conservative Party leadership election 2019?
5
When Conservative MPs lose the whip, do they retain the right to vote in leadership elections?
6
Has anything been published about how YouGov determined the figures they are using for predicted turnout by age?
4
Is there a correlation between a county's swing towards Democrats from 2004-2020 and increase in minority population?