No deal Brexit : How is it going to help UK to create new trade deals?

There is a lot of optimism that leaving EU's Single Market, will be an opportunity for UK to create new trade deals with other countries outside the EU. I have seen articles and people using this argument, but I never got to understand it.

Is the EU's Single Market, in any way, restricting UK from creating more deals with other countries? Or is UK going to be a more attractive market, if they left the EU market?

More than "an opportunity", it should read "will be forced to", as it will begin with no trade deals with other countries and will default to the WTO rules.

For the answerable part:

A country within the EU cannot sign its own, separated trade deals, because the single market would mean that once the goods are in that country they can travel everywhere in the EU. For example, if there is a 10% tariff in bananas and Spain signed a trade deal agreeing to a 0% tariff, everybody would import bananas to any country of the EU through Spain.

And getting the EU to sign a trade deal is not easy. The fact that the EU is formed by many countries mean that getting a trade agreement that is acceptable to all of them is considerably more difficult1.

The UK will have an advantage of being a more "coherent" market, which means some trade deals may be easier to reach. If there are no banana producers in the UK, there would be little opposition to a trade deal that eases the import of bananas in the country. This should lead to more agility for creating trade deals.

Of course, there is a downside to this: the UK will be a considerably smaller market than the EU. This means that the other part will benefit less from probable trade deals (selling their bananas to 65 million people instead of 430 million), so they may be less interested in making deals that help UK business to sell to them.

And the above leads to the fact that, as of now, we cannot predict if the situation will end as a net advantage for the UK or not; we cannot even predict if we will be able to tell that in the future (what if it helps industry but hurts financial services?)

1That is already is an issue within a country (business that feel threatened by foreign competition opposing the trade deal, business that think that they can increase they market are in favor), with all of the countries of the EU it is considerably more complicated.
Share
Improve this answer
edited Jul 13, 2018 at 12:49
answered Jun 15, 2017 at 19:55

Being in the EU does not merely restrict but completely precludes separate trade deals with other nations. The EU functions as a customs union that transferred trade negotiations to the EU level. There is a single external tariff and the EU negotiates as a block (with the consent of national government and parliaments, as applicable, but always as a block). That much is not debatable.

Whether the new trade deals the UK will have to negotiate are going to be hugely beneficial or at least help soften the blow from reduced trade with the EU is another question.

The EU negotiated its trade deals with the intent of benefiting the EU as a whole. One thing that the EU had been accused of doing prior to Brexit, is favoring the continental countries when negotiating trade deals, sometimes at the expense of UK interests. This is despite the UK having significant increases in exports under the EU Agreements.

So any given trade deal item that the UK does on its own is likely to be more favorable to the UK than it would have been as a member of the EU. It is also arguable that as a member of a large trade bloc (the EU) that UK would have benefited on the whole far more than they will being on their own. Again that is taking as a whole. It is easy to look at specific trade deals and find places where it appears that the UK was being harmed. But when you look at the whole picture it appears that the EU was doing well at building on the strengths of its member nations. But that is little solace if you are an English fisherman that is being greatly harmed.

So while the UK's trade deals will likely be less beneficial on the whole than if they had been a part of the EU, they will be more popular as they can avoid causing harm to the industries that allow the UK to be more self reliant than they would need to be if they were a member of the EU. It has never been the intent, nor has the EU ever claimed it was, of EU trade deals to maintain the self reliability of its member nations in its trade deals. Instead it has focused on strengthening the EU as a whole. Much like in the US certain states benefit more from some trade deals than other. But as a whole the intent is to strengthen the entire nation.

Maybe by living in an alternative reality? The grim truth, as The Economist sketches it, probably looks more like this: 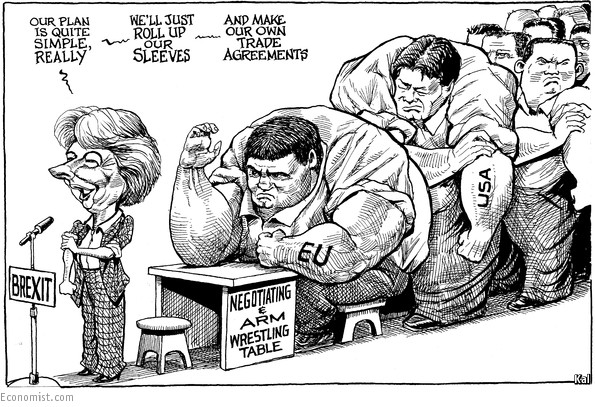 The trading position is also weakened by the fact that trade deals take years to negotiate and can fail completely at the last hurdle. Data points:

If you analyze the image carefully, note how there's only one table and trade partners line up in a queue (instead of many tables, one arm-wr^Wtrade partner each). This illustrates that the UK likely does not even have enough trade negotiation talent to conduct the negotiations. How could they? The last 40 years, all trade negotiation was out-sourced to the EU.

There's a story that the UK government needed to tell to population about how everything will be fine. We have found in the latest election that this story isn't believed by many.

The reality is that they are just burning up trade deals with their nearest and closest trading partners, with all the EU countries, including the UK's largest trading partner, which isn't the USA as Mrs. May tries to tell us, but Germany.

The UK may be able to get better trading deals with non-EU partners. However, any such deal that is at the expense of the EU will cause a reaction by the EU, which will be costly for the UK, or for the country striking the deal, or both.

So in summary it depends on how the UK will "sell itself" to the possible trade deal partners.

Population: The UK has of course only 80 millions vs. several hundreds of millions in the EU. "buying power": the UK has a lower buying power than Germany, Netherland etc... but higher than Portugal and Greece.

It will really depends on the skills of negotiation of the UK.

AND it will take time to have such trade deals (see for example Mexico with the EU now etc...)

I think that the optimism you describe stems from a perception that the EU is an impediment to trade deals, that we lack sufficient deals through access to the single market.

As an example both the US and China are practically poised to sign a free trade deal with Britain, but this can not happen until Britain leaves the EU.

Whatever kind of Brexit we have, this outcome becomes more likely, and many others like it of smaller consequence...

Don't get me wrong, I think there is a problem with many of them. At what price does it come other than economic gains? What are the reasons that the EU prevents these kinds of deals? Those are, sadly, other questions...

... but I can certainly see plenty of reasons to be optimistic that Britain will be better poised to engage in free trade at some cost, including the potential loss of free trade with the EU.

Not the answer you're looking for? Browse other questions tagged united-kingdom european-union international-relations brexit trade .

3
What do the Brexiters want when they talk about striking new trade deals
32
After Brexit, can the UK deal with individual countries of the EU?
18
Why would it be considered advantageous to negotiate ones own trade treaties?

14
Brexit: leaving Customs Union and/or Single Market -- what do these things really mean?
14
Why is immigration control considered to be the first Brexit priority?
18
Why would it be considered advantageous to negotiate ones own trade treaties?
5
British tax havens and the EU post Brexit
3
What's this EU concession the British press is talking about... in EU representative's own words?
1
How do export restrictions help domestic market and national production?
3
Why did the UK not trade more with countries outside the EU?
8
Are there any countries that the UK now has trade agreements with, that it didn't before it left the EU?