Why didn't Britain, France & Russia object India on the successful test of Pokhran-II?

After the successful Pokhran-II nuclear test series, India was sanctioned and heavily criticised by all powerful countries except Britain, France and Russia. From the Wikipedia page,

...However, the United Kingdom, France, and Russia refrained from condemning India.

What was the reason for their lack of objection?

It's all down to business, none of these 3 countries wanted to antagonise bilateral relations with India.

Russia has historically been and remains India's largest defence partner. India was the single largest export destination of Russian arms. Negotiations were already in place to sell the Indians an aircraft carrier and a bunch of fighter jets. In addition Russia and India have historically had a close relationship because India often sided with the Soviet Union as a counterbalance to U.S. support for Pakistan.

France was also making billions selling the Indians Mirage fighter jets and trying to make even more money selling them submarines. Antagonising the Indians served no purpose for the French other than to risk their deals. Indeed just before the Pokhran tests, in 1998 during a visit by President Jacques Chirac to India, India had signed its first ever "special relationship" with France.

The UK has long shared a close relationship as India, as a former colony, and India is extremely profitable for British business and is one of their most important trading partners. I don't have data for 1998, but it was certainly extremely significant. Some indicative data from 2011 can be found here. Indeed just the previous year in October 1997, India had hosted Queen Elizabeth II.

In conclusion all three had close economic and political ties with India and didn't want to risk antagonising them by criticising the nuclear tests. At the end of the day money speaks a lot louder than any moral duty to sanction against nuclear weapon states. If North Korea was a multi-trillion dollar economy, we would all be dancing a different tune when it comes to their nuclear tests.

In addition to the other good answers and the economic argument: they were not in a position to criticise

France had recently made some tests (1995). The president during these tests, Jacques Chirac, was also president during the indian tests. He had already recieved a lot of criticism for it, both internally an externally, so I guess he did not want to look like a huge hypocrite. The french press would surely have used this to his disadvantage.

For the two others, it is less clear whether this played a role or not.

The UK made tests until 1991. There had been a change of prime minister since (Tony Blair got elected in 1997). But still, a condemnation could have been seen as inappropriate.

Russia had not made any test since 1991 and the end of the soviet union (that I am aware of; some have been done later under Vladimir Putin). But during that time, it still had the largest nuclear arsenal in the world.

Note that considering the economic performance of the Russian federation in 1998, the economical argument was probably more valid for them.

Why didn't Britain, France & Russia object India on the successful test of Pokhran-II?

France & Russia: Because of the arms trade.

Britain: If arms trade was insignificant, 2.3% of UK's population are of Indian origin.

India was and still one of the biggest(if not the biggest) importer of arms from those three countries.

According to SIPRI, India received the following arms from France, UK, and Russia from 1993 to 2003: 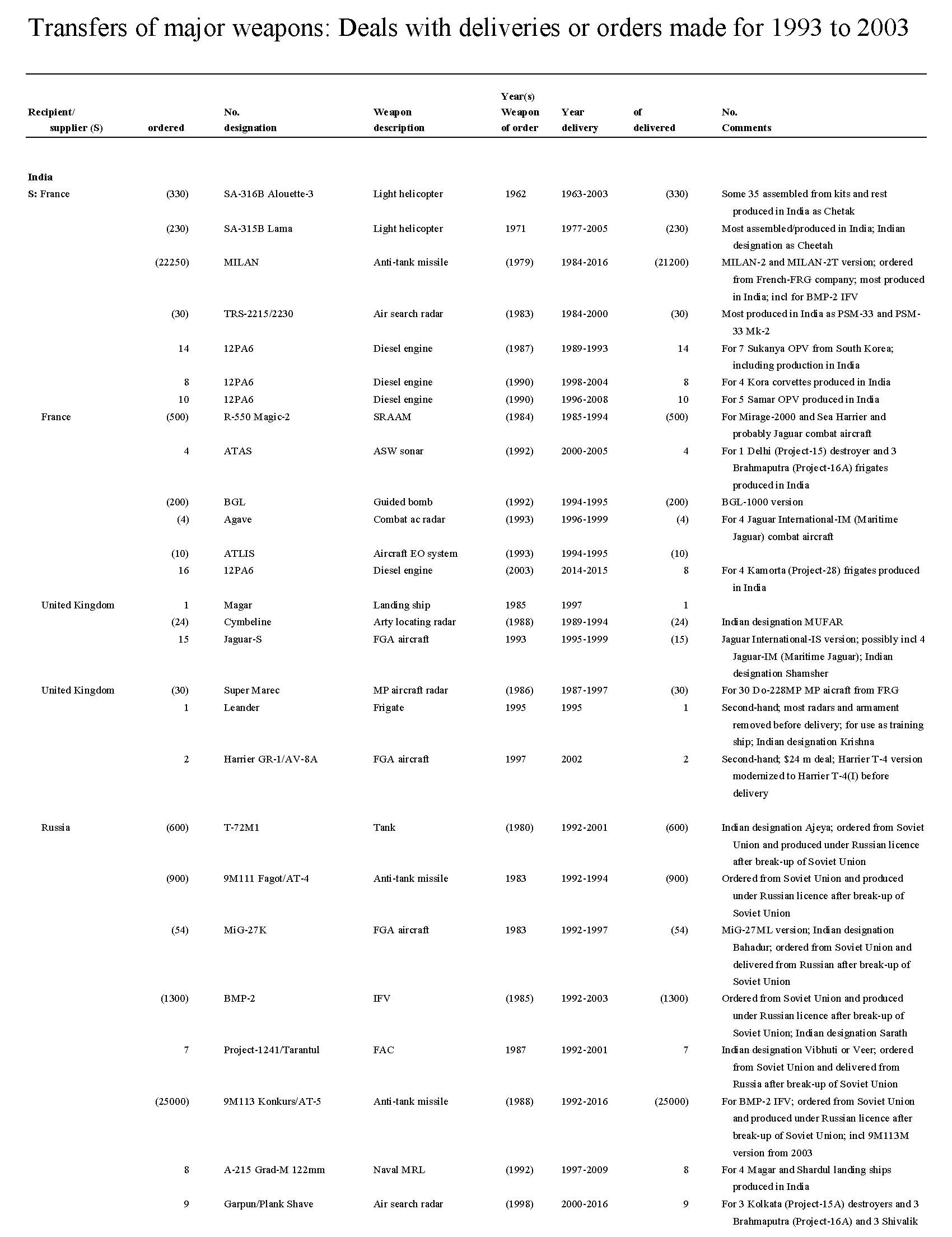 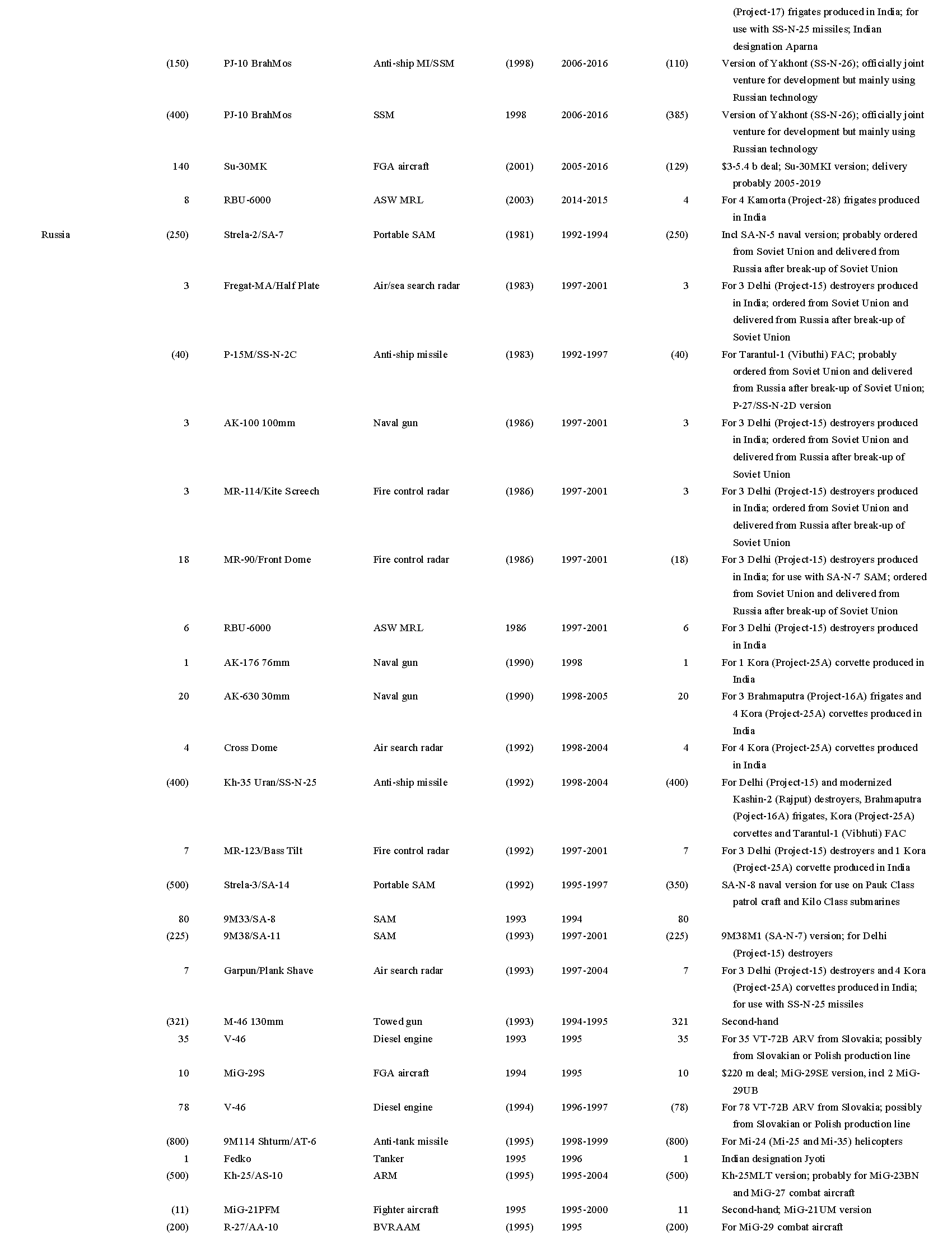 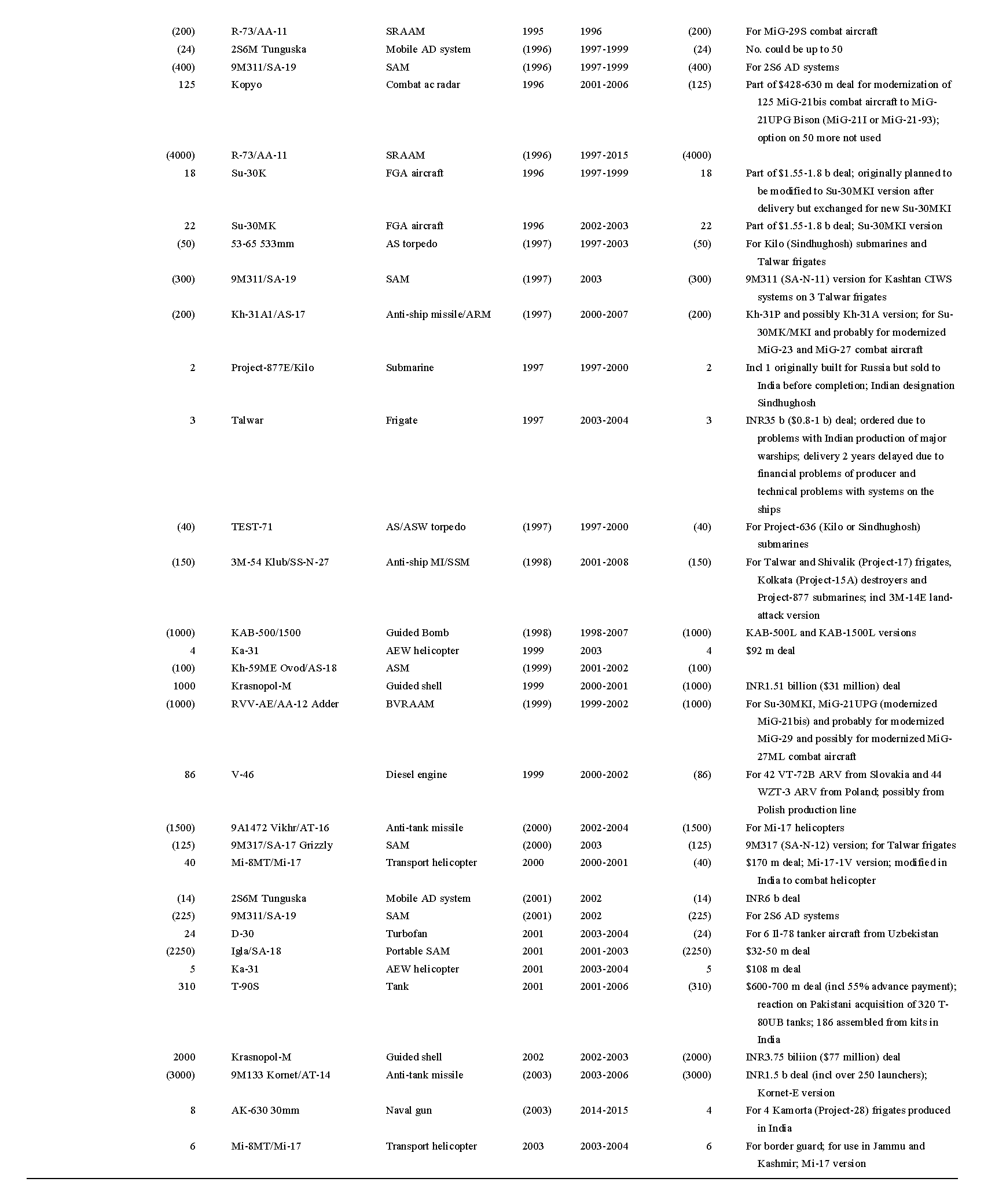 Not the answer you're looking for? Browse other questions tagged india nuclear-weapons .

21
Why did democracy survive in India, whereas in most countries of the time it didn't?
10
Why does the failure of a Trident test matter when we are going to replace it anyway?
2
Why floor test conducted even after the Oath?
4
Why did India conduct Pokhran II in 1998, despite having already proved itself a nuclear power in 1974?
43
Is it accurate to compare the nuclearization of North Korea with that of Pakistan and India? Why or why not?
8
What was George W. Bush's explanation at the time, for unilaterally withdrawing from the ABM treaty?
18
Why weren't any sanctions imposed on India for not signing the Treaty on the Non-Proliferation of Nuclear Weapons?
36
Why does China have so few nuclear weapons?
0
Why didn't India stop incoming flights in early Feb 2020 to prevent COVID-19 infections?