How does religion interfere with medical practice in US?

I have recently watched a short documentary about abortion and refusal of performing such procedures due to religious reasons in my native country. The legislation is not clear, since two rights seem to collide here: the right of having an abortion (certain limitations apply, of course) vs. freedom of religion.

The problem is even more complex since abortion was forbidden under the communist regime and many women died due to complications related to unofficial pregnancy termination.

I am wondering how these cases are treated within US, where medical procedures are much more standardized than in East European countries.

According to this article a court ruling stated that

This article seems to somewhat confirm the idea within the first one:

A new law in Mississippi has made it legal for doctors and nurses to refuse care to certain patients on religious grounds .

The law allows medical staff to refuse treatment to members of the LGBQT community on the grounds that it violates their religious beliefs. It would serve to reason this would also pertain to atheist doctors and nurses who could refuse to treat patients who are religious.

Question: How does religion interfere with medical practice in US?

In the United States, if a health care provider's right to religious freedom is in direct conflict with a law that requires him/her to perform an abortion contrary to their religious beliefs, the courts would apply the legal standard of strict scrutiny to that case. To summarize, the following conditions would need to be met:

There also needs to be a distinction made between negative rights and positive rights. A negative right is one which you have that cannot be taken away from you. A positive right, on the other hand, is one which requires someone to act on your behalf, or you to act on theirs. Both religious freedom and abortion are negative rights. It's one thing to have a law that protects a woman's right to an abortion. It's another matter entirely to have a law that requires a doctor to perform one. The negative right to the free exercise of religion is one of the only legal defenses a doctor who opposes abortion has against a law that would otherwise compel him/her to act contrary to his/her religious beliefs.

Lastly, abortion is a much stickier issue in the United States than it is in the rest of the world. This is mostly because religion is a much bigger factor in America than it is elsewhere. Consider the following graph: (Source: Pew Research Center) 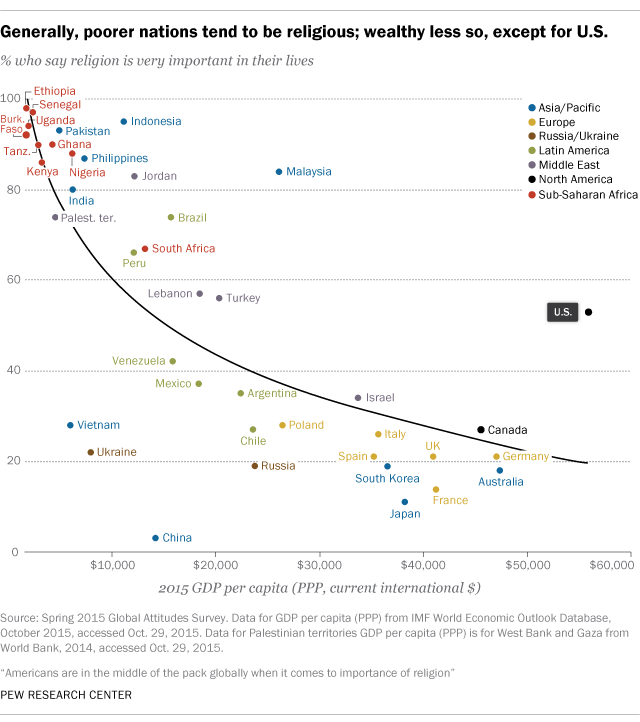 Clearly, America is a far more religious country than any other developed nation.

Since the vast majority of abortions in the United States are elective (i.e. not connected to health concerns of the fetus or mother, and not due to rape or incest), the central issue surrounding the abortion debate is a moral argument. Moral arguments against abortion often stem from religious faith, but not always (there are pro-life atheists out there). The only reason women have a right to abortion in America is because of a SCOTUS decision, not an act of Congress. Those are always contentious. Many people in the pro-life camp consider the SCOTUS opinion to be a perverse interpretation of the Constitution, and that the very idea that there is even a "right" to an abortion at all is a matter of serious debate in the U.S.

To understand why the issue is so complex in America, you have to frame the conversation in the context in which both sides understand the issue: (Note that I am using the terms "Pro-Life" and "Pro-Choice" even though different groups call them by different labels)

Pro Choice:
People on the pro-choice side of the argument see pregnancy as a women's health issue. A woman has a fundamental right to make civil and medical decisions regarding her own body and her own life, and since pregnancy is inherently a medical condition with serious medical and social implications, neither doctors nor the government may withhold treatment to terminate an unwanted or potentially dangerous pregnancy. Extremist pro-choice activists believe that a woman should have the right to make this decision at any time for any reason, while more moderate pro-choicers believe that there should be some limitations. Others may be morally opposed to abortion, but nonetheless believe that the government cannot take away a woman's right to choose.

Pro Life:
People on the pro-life side of the argument see a fetus as an unborn child -- a bona-fide human life -- and is therefore entitled to all the rights and protections thereof. Since the right to life is the most fundamental right of all human beings, termination of an unwanted pregnancy is tantamount to murder. Although they recognize that the child's life is intimately connected to health of the mother, the mother has no right to end an unborn child's life for arbitrary reasons. Extremist pro-life activists believe that abortion should be illegal in all cases except where it is medically necessary to save the mother's life (and where there is no hope of saving the child), whereas more moderate pro-lifers would allow exceptions for pregnancies resulting from the rape or incest of the mother.

So you see that in your question, you take it as a matter-of-fact that women have a right to abortion, which is common in many other countries. In America, however, that right itself isn't even a settled issue.

As the teenvogue article points out:

Under the Affordable Care Act, doctors cannot discriminate against patients based on sex, gender, or previous termination of pregnancy

The US has a rather complex health care system. The plaintiff in this particular case is Franciscan, which is a religion-affiliated health care provider. This is where things usually get 'sticky'.

The ACLU has responded (as you'd expect).

The main concern here is likely less about individual doctors but a large health care provider deciding not to provide particular services. As rural and regional hospital and clinic networks continue to merge, there's becoming fewer and fewer alternative options for patients.

Generally speaking, though, there's always been this fuzzy line between religion and law in the US. It's not a hard line and things change and morph.

Not the answer you're looking for? Browse other questions tagged united-states healthcare religion .

3
How can a classless society exist with religion
8
During the Obama administration, did the US interfere with foreign elections?
0
Can someone explain how the healthcare Medical Loss Ratio (MLR) testing is applied to health insurance policies?
4
How can I find the name of a bill mentioned in the press?
6
Why does Indonesian identity card religion include only 6 religions?
121
Why does religion get a special treatment in anti-discrimination laws?
2
What provisions does JCPOA contain for medical isotopes or their (special) precursors?
4
How does a "delivery of military aid" play out in practice?
15
Does the U.S. president have to disclose their religion to the public?
1
Do any countries have limits on healthcare personnel work hours?