Do parliaments exist where the amount of non-voters is represented?

Often a considerable amount of persons in a state are not taking part in the election of a parliament. Commonly this means, that their opinion is not represented in the parliament. But do parliaments exist (or have existed) somewhere in the world, where the amount of non-voters has an influence on the distribution of the seats in the parliament (So, e.g if there are 30% non-voters, 30% of the seats will stay empty or will be filled with randomly selected citizens)?

Yes: Every country with compulsory voting. 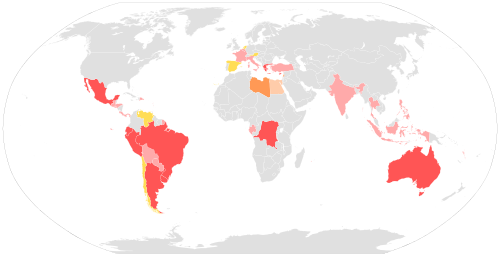 This representation problem is why compulsory voting exists in these democracies; to avoid sampling bias of only those who are radicalised enough to vote.

It's quite common to hear calls for non-voters or deliberately invalid votes to be somehow counted or represented but it's difficult to see how this could be implemented in practice.

Think about it this way: If 30% of the seats are left empty, what's difference does it make in practice? There would be fewer MP (so less money for their compensation, staff, etc.) but that's mostly a technical detail. Beyond that, only actual members can vote or participate in coalitions so the same parties would be needed to get a plurality of the vote, pass laws, etc.

Incidentally, parliaments have different sizes so whether there are 300 MP instead of 600 does not sound like a big deal in principle. If your country's parliament has, say, 400 seats and a 60-70% turnout, it would be easy to write a law that says it now has 600 minus the empty seats for non-voters and still go on as before. What would be the point?

The only way in which it could be made to matter is by combining empty seats and a quorum or minimum proportion of seats (and not of actual votes) to take certain decisions. For example, in the German parliament, the chancellor and government have to be approved by what's called a “chancellor's majority” (i.e. an absolute majority of all MP and not merely a majority of the MP that choose to participate in a given vote). Abstaining or not showing up can thus prevent the election. Similarly, many countries have “supermajority” requirements, e.g. to alter the constitution.

If seats could be empty but still count in defining the majority, this would have a very real impact on the parliament but it would also create of huge risk of complete paralysis. That's not a very attractive idea, especially to the people who get to write constitutions so I would be very surprised if it did exist anywhere. I certainly don't know any country like that.

9
What was the lowest known voter participation rate?

0
Do/did non-dictatorial Capitalist societies exist?
9
Is there an equivalent to Arrow's Impossibility Theorem that applies to systems where voters can give multiple candidates the same ranking?
17
Are there advantages to my being registered as an independent in the US?
5
Statistics on Australian non-voters who are actually sanctioned (fined or otherwise punished)
0
What are the benefits of foreign aid for voters?
4
Precincts where Clinton (and Obama) got <3% of the vote in 2016 and 2012?