How often does Senator McCain vote against his own party?

Senator McCain was Republican candidate for presidency in 2008, so perhaps plenty of Republicans (at least in states with closed primaries) felt that he represented their views.

Is there any actual data to back up just how often he votes for/against his own party?

What is the percentage of times where he voted with Republicans on a bill/issue where there was a clear political divide between the two parties? (my definition of that would be when 80%+ of each party votes on the opposite side of 80% of the second party).

Ideally, I'd like a separate count for actual votes on bills, and one on clear positions taken on issues that did NOT get an official vote count.

Probably the best measure of a candidates ideology is the DW NOMINATE score. It takes a wide variety of position measures into account, including both roll calls, party loyalty, and non-vote position papers. If you look at the embedded graph, you will see that there are clusters that pretty well define the politicians involved, but there is a coherence to the various parties. 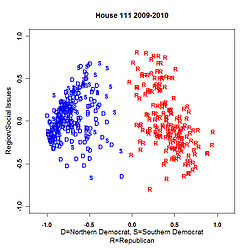 McCain, in particular, is by just about any measure, a maverick. That said, he isn't alone. In The Measure of a Maverick, Henry Brighouse writes:

Under this definition, John McCain is very definitely a maverick. Indeed, he’s the seventh most mavericky Senator since 1877. However, he isn’t the most mavericky Senator in recent history; that honour goes to Lincoln Chafee, who comes in at number three. Also, McCain-ites who want to embrace this result should note that it is based on the same kind of measures of ideology (DW-Nominate scores) that have been used to show that Barack Obama, contra the National Journal and Republican mythology, is not (for better or worse) the most liberal Senator by a significant stretch.

There are ways of measuring this stuff after all.

McCain's exact scores are as follows:

As he's a member of the Republican party, that'd make him a Republican. As far as I know, party members aren't members by a percentage. They're either a party member, or they are not.

As for his voting record, you can look it up here: http://votesmart.org/candidate/key-votes/53270/john-mccain-iii#.UlTZyWRgZgI

Not the answer you're looking for? Browse other questions tagged united-states congress republican-party .

7
How does DW-Nominate determine whether a specific member of Congress or vote is liberal or conservative?

17
Are there advantages to my being registered as an independent in the US?
2
Can the USA president use military force against his/her own citizens without approval?
9
Did a Vice President ever cast a tie-breaking vote against his own party?
3
How often does Congress try to overturn Marbury v. Madison?
5
If a party holds no primary debates, how does a lesser known candidate express his views in a forum specific to the party?
2
Has Orrin Hatch elaborated on his vote against the Export Administration Act?
12
Has any recent Republican legislation been blocked solely by the filibuster?
8
How often does the federal government sue states?