How does Donald Trump Jr. benefit from releasing the e-mails he released?

Trump Jr. recently disclosed emails suggesting he welcomed Russian help against Clinton (see for instance here and here). To a considerable extent, this seems a damaging move to him and to much of the team he is working with. As far as I understand, this is pretty much political self-harm.

Why would he do such a thing? How does this move serve his interest?

According to CNN, the emails were released by Donald Trump Jr. shortly before they were going to be published by the New York Times. From this article, we read:

Trump Jr. tweeted that he was releasing the emails to be "totally transparent," but his release came moments before The New York Times published the content of the emails.

The only options for Donald Trump Jr. would be to deny it or try to accept that the mails were going to be public and working on that assumption.

In the face of the importance of the issues, it is to be expected that these e-mails are going to be included into the ongoing probes1 about Russian meddling in the presidential campaign and Trump's team collusion with Russia, and that would lead to -very likely- Donald Trump Jr. being forced to testify. If Donald Trump Jr. were to testify, his options would be either:

'#1 and #2 lead to admit (explicitly or implicitly) that the e-mails are indeed true.

So, (if we discard #3) claiming that the emails are false it would only lead to Trump Jr. being forced to rectify, only that at a later time (during which the issue would not be forgotten) and with yet more damage to his credibility.

By releasing the e-mail he may (attempt to) claim that he was "not hiding anything" and try to get as much of a positive spin2 from it as possible, under the current circumstances. For example, his release in twitter was accompanied by affirmations that what he did was ok and which (despite no legal expert agreeing with that) are already being repeated by his supporters.

Other possible advantages that I can think of (although I will admit that these are a little twisted; I would be surprised if those were the main reasons but they could have helped in making the decision):

1If such a story goes as far as to being published, it is reasonable to assume that the journalist has evidence enough to prove that the emails are indeed Donald Trump Jr.'s.

2This is usually called controlling the narrative.

It's reported that The New York Times already had gotten the emails and Trump Jr. published the emails to preempt their publication.

As the NYT mentions in an article:

After being told that The Times was about to publish the content of the emails, instead of responding to a request for comment, Donald Trump Jr. posted images of them on Tuesday on Twitter.

Also, the Deputy Managing Editor of the NYT Clifford Levy acknowledged that in a tweet:

.@DonaldJTrumpJr posted these emails after being informed that The New York Times was doing a story on them.

I’ve got a quick statement that I will read from the President: "My son is a high-quality person and I applaud his transparency."

In this case, it is more advantageous for him to publish the emails himself since he can claim he is transparent. By letting the NYT publish it, he won't be able to do that but the contents of the email are still revealed.

So, in this circumstance, it is a better move for him to do that.

It was a way to deny the New York Times a scoop. When a news outlet gets a story like this you have to do a lot of investigative journalism to validate and verify your sources. If you've managed to keep it quiet, your paper stands to make a lot of money because you are now the source for all of this information.

By tweeting out the emails ahead of the story, Trump Jr. literally gave to every other news outlet what the NYT had worked for over a year to compile and corroborate. It's what you would call a pyrrhic victory. It was coming out anyways, so Trump Jr got some measure of revenge. This summary of another journalist's tweets (who was also working on this story) pretty much says it all (read from the bottom up) 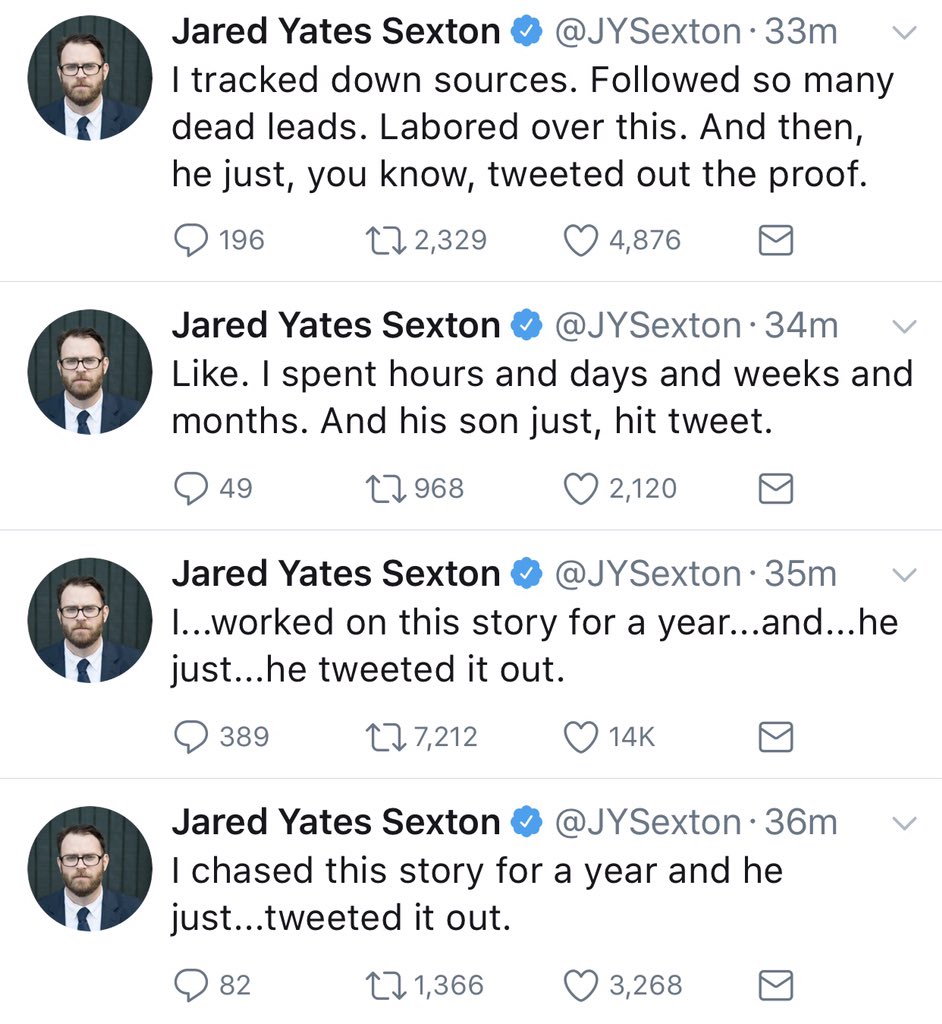 This isn't actually a political question; it's more a social one.

When damaging information about yourself is about to be made public, you have two choices:

It's human nature to give somebody a bit of a reprieve for owning up to their mistakes; you look a lot worse if you insist upon your innocence right up until the time that somebody proves you are lying.

Think of it like a plea deal with the public — I'll come clean to you now, before the media rats me out, and you give me a little bit of credit for that.

It's an attempt to gain sympathy by being honest, even though in truth it's an entirely self-serving maneuver.

Since a meeting like this is not illegal or unusual, the best way to respond is to be transparent and play open card. This will prevent further rumours and accusations and remove the opportunity for media outlets to exploit the situation by releasing small bits of information over a long period of time in order to get ratings.

58
Why is it a problem for Trump Jr to have met with Russians?

3
Where do I find the campaign trail for Donald Trump?
58
Why is it a problem for Trump Jr to have met with Russians?
3
How exactly does Donald Trump's administration benefit Russia in 2017-2018?
3
How would Donald Trump benefit from a commuted sentence for Rod Blagojevich?
7
How does Donald Trump define the word conservative?
16
Private schedules of Donald Trump: What does "RON" in diary stand for?
17
Doesn't the 22nd amendment prevent Donald Trump from running for president again in 2024?