Was Russia really able to solve its 'Ukraine problem' by invasion?

Why was Ukraine joining NATO a problem? Because Russia wanted to maintain a buffer zone between NATO and its border (e.g. Belarus, Finland, Georgia).

Why does Russia want a buffer zone? Because that would give them a military advantage over NATO in the case of a NATO invasion.

Nonetheless, Ukraine is moving forward with its plan to join NATO.

My question is: since Ukraine's NATO membership is almost inevitable, was the invasion of Ukraine a miscalculation and waste of time by Russia?

Eastern Ukraine was very pro-Russian prior to the February 2014 invasion and subsequent annexation of Crimea by Russia with Crimea (which was only annexed to the Ukraine in 1956) being particular pro-Russian (the pro-Russian Party of Regions won 61% of the vote in Crimea second only to Sevastopol which is also on the Crimean peninsula and two other far Eastern provinces which are now mostly occupied by Russia), while Western Ukraine (which had a narrow majority) tended to be pro-Western, as the results from the 2007 election in the Ukraine (via Wikipedia) illustrates: 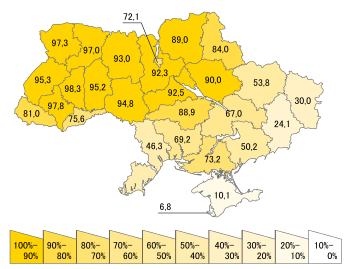 Only about 10% of people in Crimea and less than a majority of people in the strongly pro-Russian Eastern Oblasts speak Ukrainian as their first language. 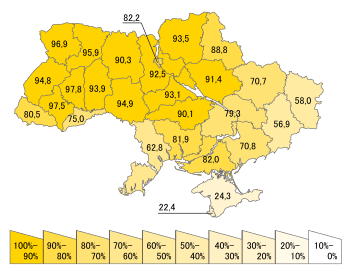 Image above from Wikipedia

(The smaller, less Ukrainian oblast on the Crimean peninsula which joined Ukraine administratively in 1956 is Sevastopol). As explained in this article:

Following the 2014 Crimean crisis, Crimea and Sevastopol became de facto administrated by the Russian Federation, which claims them as the Republic of Crimea and the federal city of Sevastopol. They are still recognised as being Ukrainian territory by the majority of the international community.

The area Russia controls now is roughly as follows (subject to shifts in an active war in Eastern Ukraine): 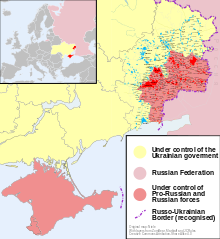 One can seek that it coincides with parts of Ukraine where Ukrainian identity and language speaking is lowest, although still very significant. All four oblasts occupied by Russia or Russian-allied forces have a majority of non-Ukrainian first language speakers, and these four oblasts have the lowest percentages of people who identify as ethnically Ukrainian, although a majority of the two Russian occupied oblasts outside of Crimea still identify as ethnically Ukrainian.

So, the partial Russian invasion was partially about protecting co-ethnics who were shut out of power at the national level in Ukraine despite making up a very substantial minority of the population of Ukraine which was a majority in perhaps a third or more of the country geographically speaking.

But, while a division of Ukraine might have been desirable from a political autonomy perspective for everyone in the country if reached peaceably, a unilateral invasion of Crimea and Eastern Ukraine by their co-ethnic Russians implicated the sovereignty of Ukraine and showed a disrespect for the principles of sovereignty or international diplomacy or norms by Russia.

International political alliances may not have been irrelevant to the Russian invasion, but ties of ethnicity and language clearly played an important part as well.

It is also worthwhile to observe that the annexation or control of the most pro-Russian oblasts by Russia has the effect of tipping the previously almost evenly divided political balance in the rest of Ukraine in favor of pro-Western forces by removing core areas of pro-Russian parliamentary support from Ukraine's parliament. So, while the Russian occupation may be fairly effective in providing "protection" to Russians in areas with Russian majority populations within Ukraine, the Russian occupation is actually counterproductive for Russia in terms of the influence it has on Ukraine's international and trade relations as a whole, even before international sanctions arising as a result of Russian occupation are considered.

For example, a lot of key manufacturers of Russian military equipment were located in Ukraine and have now ceased to do business with Russia's military, crippling several critical Russia military programs such as its program to expand its Navy.

Was Russia really able to solve its 'Ukraine' problem by invasion?
wasn't invasion of Ukraine a miscalculation and waste of time by Russia?

Yes, there was a good evidence that Russia was able to stop Ukraine by invading it, just like Russia has successfully prevented Georgia's Eurointegration by armed invasion to Georgia in 2008, with no consequences for the Russia itself.
No, not waste of time. Stopping Ukraine's Eurointegration was Russia's last chance to avoid its own collapse, both as an empire and as the unite state. They understood it very well, and they did everything to keep their own country from collapsing.
Yes, they miscalculated about the world's response on their actions this time.

Before expanding on the above, let me first say that some key points from the referenced video are not very accurate. Not that I'm saying it is deliberately false, but it is misleading as it forms a wrong cause-and-effect picture in the minds of its audience. 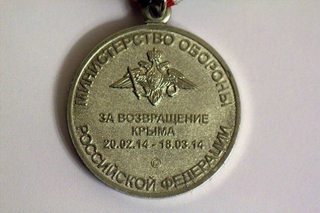 Another wrong statement is that Ukraine is "split" between Russian and Ukrainian nationals. This has been debunked many times, incl. this site, so let me not reiterate this.

There are several other inaccuracies, too. Again, I don't say that Al Jazeera is lying, but one should always keep in mind such nuances before forming their understanding about what's going on.

So, let's get back to "miscalculation and waste of time by Russia".

Zbigniew Brzezinski has famously observed that “without Ukraine, Russia ceases to be an empire, but with Ukraine suborned and then subordinated, Russia automatically becomes an empire.”

Russia counts itself an empire. Putin personally said that the collapse of Russia's previous project, the "USSR", was "the biggest catastrophe of the century". Most obviously, he sets his goal to revert that.

An empire only make sense if it has colonies. Highly preferable if it expands (e.g., it obtains new colonies, not only keeping the old ones). This is expanded by Lenin in his numerous works, and nothing has changed since then¹.

Ukraine was the key colony to Russia. Many people underestimate the role of Ukraine and Ukrainians in the history of Russia. In pre-technology era, Ukraine was the key of Russian supply of agriculture. Since 1930's, the core Russian technology, science, and manufacture was based in Ukraine or developed by Ukrainian nationals² who were enslaved in Russia's concentration camps (so-called "sharashka's").
The Wikipedia article has numerous sources referenced that confirm this claim³.

Invasion to Ukraine. If let Ukraine go, the above factors make Russia collapse quickly and inevitably:

Russia understood the above factors very well and it did everything possible to achieve that goal — namely, they invaded Ukraine to force it remain a colony. This can't be called a miscalculation.

They expected that the West will prefer keeping "business as usual".

The Russians have not been taught lessons after they invaded Georgia, leave alone smaller armed conflicts like Nagorny Karabakh, Transnistria, and many others. They has solid reasons to think that this time the world's response would be the same (= no response).

This became true as a result of the world's support of Ukraine after the Russian invasion. As of February 2014, there was neither popular demand to NATO among the Ukrainians, nor the NATO's intent to expand to a blatantly corrupted colony of Russia. 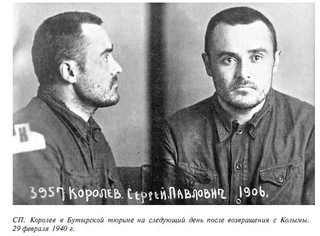 Sergei Korolev in Butyrka jail next day after return from {the Russian concentration camp on} Kolyma {river}, 29 Feb 1940

11
Why is visa-free travel such a big deal in politics?
11
Are there constituencies for the partition of Ukraine?

13
Why did Russia start its aggression against Ukraine after the Ukrainian unrest from 2013-2014?
22
Why don't signatories of Budapest Memorandum on Security Assurances (except Russia) protect Ukraine with force?
13
Why don't Russia and Ukraine enter an official state of war?
9
Why would Russia care about NATO troops on its borders if it has nuclear weapons?
23
Why would NATO not defend its members against Russia?
21
Did Ukraine lose half its GDP because of sanctions against Russia?
10
Ukraine and the North Atlantic Treaty Organization (NATO)
0
Why did the UK agree to Spain's NATO membership seemingly without any Spanish concessions regarding Gibraltar?