The following are the election results (source): 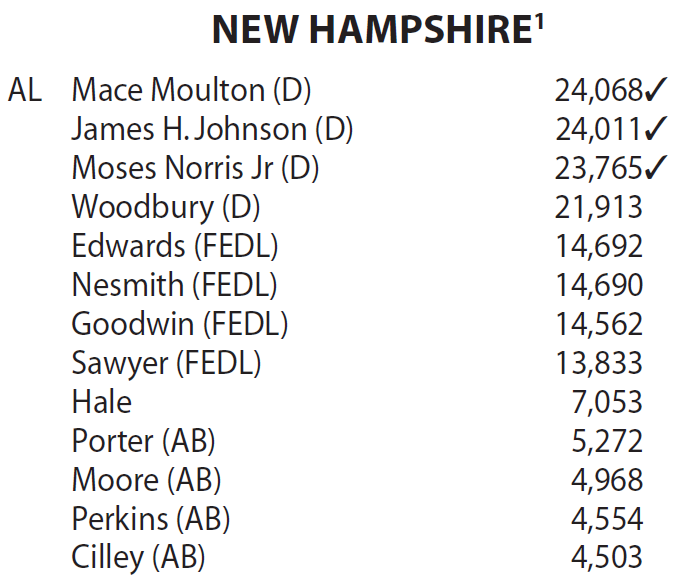 Can someone explain to me how exactly this worked? In particular, how many votes would Woodbury have needed to have been elected?

It's my understanding that at the time Congressional seats were not divided up by districts, but rather everyone in the state cast votes for all seats up for election. With this being the case only 3 of the candidates running received a majority # of votes, which is required to actually win a seat. The other remaining 9 candidates spread the votes out sufficiently to prevent Woodbury from securing 51% of the vote. It's unclear why there would not be a runoff election to fill the 4th seat.

8
How many seats are physically on House floor?
9
Does the Electoral College majority requirement play a role in keeping the US in a two party system?
2
Does Mike Pence have a chance of being elected as POTUS by the House?
1
Are there written rules regarding redactions in Congressional documents?
0
Why can't local representatives be chosen directly in proportional voting by selecting the top ranking candidates in each district?
1
Legality of “seat sharing” in congressional districts
14
The authority to convene a new House of Representatives
3
How are levelling seats allocated in Scandinavian elections?
1
How many electoral college votes would the District of Columbia be entitled to if the least populous state cap did not apply?
5
When was the last time the US electoral college chose a president other than the person recognized as winner at election time?