Why do some promote "Medicare for all" and some "Medicaid for all"?

I've noticed some progressive political activists in the US demand "Medicare for all" as their desired mode of health care expansion and improvement, while others say they support "Medicaid for all". I am not an expert on the US medical system and the insurance and coverage programs, but it appears there are some valid arguments coming from both sides. Just as an example:

Are these arguments really valid? What are other (both valid and disingenuous) reasons for people supporting one or the other scheme (or putting forward another alternative altogether)?

There's a pretty big difference in the two

Medicare is the Federal healthcare system for people 65 and over (some people get Medicare Advantage, where the government pays the premium for a private healthcare plan in exchange for certain policies). It's a huge entitlement but it is also fairly popular because it's been around for a long time and, most importantly, doesn't do a good job of controlling costs (in terms of payments to providers). As such, most people like it a great deal because it acts like people tend to think government programs should. Previous attempts to control costs (by lowering reimbursement rates) were deeply unpopular and ultimately failed. Remember, this demographic covers all Americans, regardless of economic status. As such, it is protected by a cadre of politically active American voters.

Medicaid is a whole different ball of wax. Medicaid is not as popular, but that's because it operates under strict constraints. Medicaid is administrated by the states themselves and does not do full reimbursement to providers like Medicare does. As a result, far fewer physicians accept Medicaid

A 2011 nationwide survey of doctors found 31 percent were “unwilling” to accept new Medicaid patients, with acceptance rates across states varying widely. Across the nation, the study estimated 69 percent of doctors were accepting Medicaid, but state acceptance rates ranged from a low of 40 percent in New Jersey to 99 percent in Wyoming, according to the study published in Health Affairs. This was pre-ACA expansion and prior to any reimbursement fee changes.

Obamacare my have changed that some (it bumped payments for one year to try and increase acceptance rates). Still, Medicaid is not as widely accepted. This sentence describes the difference (emphasis mine)

The fee bump of 2013 to 2014 sought to make Medicaid acceptance more enticing by putting those fees on par with Medicare reimbursement rates.

Medicare, being the more popular program, is a much easier sell (image source) 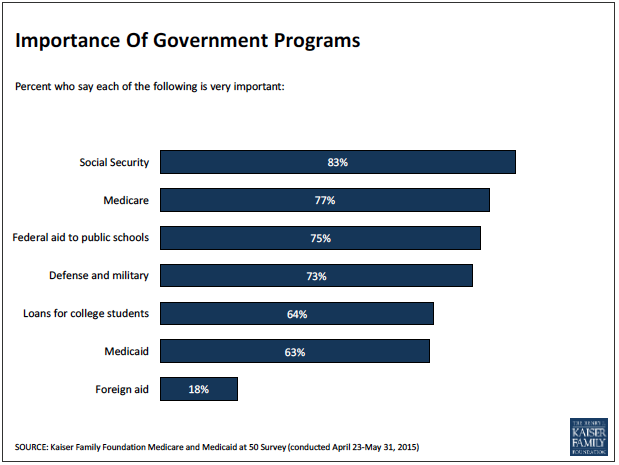 With the names being similar, and the programs being poorly understood, it's not hard to see why some would sell "Medicare for all". In reality, Medicaid for all would be the more likely program. Medicaid, which already has mechanisms to control costs, would simply expand to cover all people without private insurance. That's what state efforts like Nevada are trying to do.

The Nevada Care Plan, however, would operate within Medicaid but wouldn’t be Medicaid — meaning reimbursements would need to be hashed out once the bill was signed.

Medicaid — and Medicaid expansion — are specifically set up for the poor, and Nevada has about 600,000 people utilizing it. Of the state’s 2.9 million residents, about 11% remain without any healthcare coverage.

Not the answer you're looking for? Browse other questions tagged united-states legislation .

3
How effective has the war on poverty been at eliminating poverty?
3
Why do US Republicans continually go after cuts to Medicare, Medicaid, social security?
8
Why is Medicare/Medicaid prohibited from bargaining for price in US?
34
Why did Democrats in the Senate oppose the Born-Alive Abortion Survivors Protection Act (2019 S.130)?
0
What is the role of private healthcare insurance industry in Medicaid?
4
What are the (key) limits of coverage of Medicare for All?
3
What percentage of Warren supporters believed that only billionaires will literally pay for Medicare for all?
25
How and why would (Bernie Sanders’) Medicare for All abolish private health insurance in the US?
2
Are Medicare-for-all type plans expected to result in increased wages?
15
COVID-19 in US healthcare: who pays for testing?