What is the significance of a black and white Union Jack?

Recently, I was in Levanto on the Italian coast between Genoa and La Spezia, when I noticed, flying above an apartment building, a Union Jack in which the red and blue sections had been replaced with black. Otherwise, it was exactly the same as the British flag. 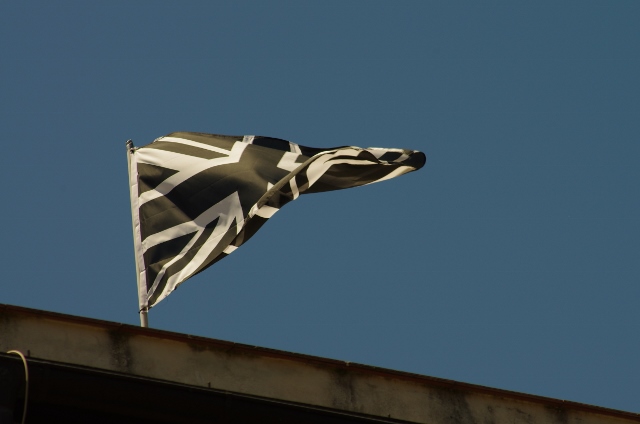 I asked a local person if they knew anything about why such a flag should be flying. They didn't, but speculated that it may have been put there by a supporter of the Juventus football team, whose colours are black and white. But as for why it was in the form of the Union Jack remains a mystery.

Does anyone have any ideas?

While I can't be certain what the intention of the person flying the flag might be, supporters of Newcastle United Football Club sometimes wave black and white Union Jacks. Some are on sale at ebay

Other suggestions are: An ironic reflection of the phrase "There aint no black in the union Jack" (indicating someone who is black, british and proud). Or it may just be a fashion symbol

Some have suggested that the flag may have been proposed by British Fascists or British Anarchists - I can find no evidence of this.

Not the answer you're looking for? Browse other questions tagged united-kingdom flag symbols .