What is the reasoning behind the statement "I don't tolerate the intolerant"?

On a debating panel I saw someone make the claim to a Conservative debater:

I don't tolerate the intolerant.

I'm trying to be open minded about this, and see what the reasoning is here so I can engage with it.

What is the reasoning behind this statement? Is seems a contradiction in terms?

The phrase "I don't tolerate the intolerant" is known as the paradox of tolerance.

While this phrase seems to be self-contradicting, it illustrates a fundamental obstacle for those who want a tolerant society. When someone wants to maximize tolerance in a society, they must ostracize those people who stand against this value (the sexists, racists, queerphobic, xenophobic etc.). If the society tolerates these people, the intolerant will oppose their efforts and prevent the society from reaching the state of maximized tolerance. A stance of tolerating everyone including those who are against tolerance would be counter-productive for a proponent of tolerance. So the exception of tolerance for those who stand against tolerance is a necessary evil.

It seems that the boundaries of 'harmful speech' are drastically overextended.

Every large movement has a couple of people who are far more extremist than would be constructive for their cause. The new left is no exception. There certainly are self-identifying progressives whose definition of hate-speech is overly broad or who themselves use generalizing hate-speech against demographics they perceive as having an overrepresentation of their political opponents. But just looking at the most fanatic proponents of an idea instead of the core of an idea itself isn't constructive.

To me - tolerating someone and allowing speech are two different things.

Saying "hate-speech doesn't hurt minorities" is simply wrong. When people constantly say "[minority] people are all lazy, stinking criminals" and are not opposed for this, this will create a halo effect around people of [minority] and everyone will start to perceive them as such. People will act on that perception and become reluctant to give [minority] people jobs or make business deals with them. This generates a tangible financial damage to people of [minority].

Now societies could try to counter this effect with anti-discrimination laws (which they do). Simply make it illegal to treat people of [minority] worse. But the problem with laws is that you can only enforce them when you can prove they are being violated. Any tangible disadvantage for a minority which can not be proven to be the result of an intentional violation of anti-discrimination laws can not be combated in a legal manner. Also, a democratic society is governed by public opinion. If you allow hate speech to sway the public opinion against tolerance, politicians will see no incentive to create and enforce anti-discrimination laws in the first place.

I am not saying that freedom of speech is a value not worth defending. But a society which defends any value fanatically to the point where it puts it above the interests of all its other values will end up hurting itself. If a society wants to reconcile multiple ideological values, it needs to make concessions. Where exactly these concessions should be made is a topic for debate. Those who say "I don't tolerate the intolerant" propose that the value of freedom of speech and the value of tolerance should be reconciled with each other by not extending either value to protecting intolerance. This is a standpoint not everyone has to agree with (like those with world views which value freedom of speech and/or tolerance differently), but it is still an internally consistent standpoint.

Tolerance means that I may disagree vehemently with what you say or do, but I'll let you go on about your business as you please on one condition -- you must extend that same consideration back to me. But as soon as you show intolerance, then the cease fire is off -- you fire the first shot and I reserve the right to return fire.

Some who tolerates homosexuality means they may have a strong moral disapproval of it, but they won't act to outlaw it or punish people who practice it. Someone who tolerates Muslims won't try to stop Muslims from building mosques or try to pass laws prohibiting the wearing of burqas, but they may believe that Islam is a terrible religion that bears responsibility for terrorism.

While it can be a contradiction, it does not necessarily have to be one.

"Intolerance" is often exemplified by acting on prejudices, assumptions, fallacies and broad generalizations about groups of people, instead of assessing the actions of individuals.

Judging based on that and not tolerating that kind "intolerance" is quite different than the "intolerance" that is being rejected. This is a case where there can be a general dictionary definition, and also a more specific context-based definition, which are not necessarily identical.

Usually, a declaration of "intolerance of intolerance" is more of a pithy statement that not all opinions are equally valid and deserve equal respect. Isaac Asimov famously said - 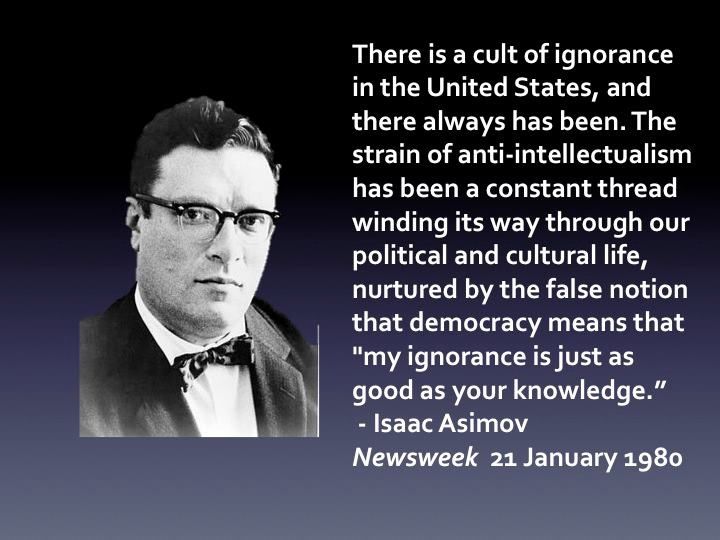 37
What is an alternative theory to the Paradox of Tolerance?

2
What was the ultimate fate of the 1985 defamation lawsuit against Rep. Don Sundquist?
9
What has led to Poland's rapid fall in the World Press Freedom Index over the last 5 years?
69
What is the rationale behind Angela Merkel's criticism of Donald Trump's ban on Twitter?
1
What are the main schools of thought on the "gray areas" of free speech?
6
What is the status of regulation of Social Media Companies in the US?
13
What can US senators do against diversity trainings in the US Army?