Why does Poland receive more in gross and (far more in) net EU funding than any other member state?

Poland receives more gross and significantly more net EU funding than any other member state, including significantly more than other Eastern members (e.g. Romania or Bulgaria). The stark disparity is seen in this chart, taken from this UK House of Commons report (PDF, 1.86 MB): 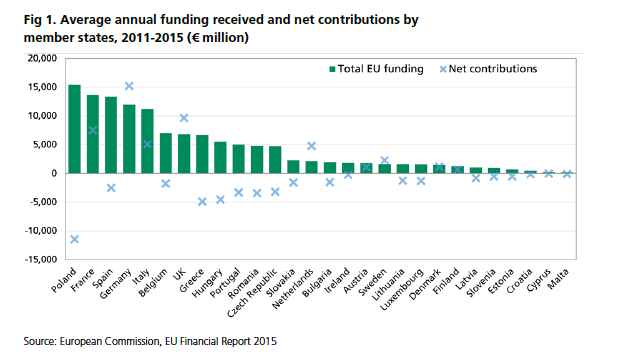 Why does Poland receive so much EU funding (particularly net EU funding) compared to other countries?

While not among the very poorest countries in the EU, Poland is far from being the richest. Per capita income in Poland is $12680, compared with $43660 in Germany and $9470 in Romania. This means Poland's per capita contribution to the EU budget is comparatively low.

Poland is much larger than other low-income EU countries. It has a population of 38.5 million, compared with 19.8 million in Romania.

Items (1) and (2) together increase Poland's eligibility for investment from the EU's Structural Funds and Cohesion Fund.

Farms are eligible for funding under the EU Common Agricultural Policy (CAP), and Poland has a lot of farms -- although its agricultural sector has consolidated into fewer and larger farms since it joined the EU.

The CAP explains why France receives much more EU funding than the UK, even though they have similar population and income.

3
Why does EU consider linking the “rule of law” to payments?

13
Why are demonstrations in the EU more violent and massive than in the US?
6
Why does Akrotiri and Dhekelia have a different relation to the EU than Gibraltar?
15
Why aren't any other EU Member states holding a referendum on Brexit?
7
How come that the most important countries in European Union have the largest number of pending infringements?
10
Why does the US federal debt increase by more than the US deficit each year?