Where did all the Confederate Statues come from?

I've heard today that there are about 1500 statues around the country. They seem to have been put up long after the war and many (more strangely) in places that weren't part of the Confederate States.

Where did all these statues of people who tried to destroy the United States or America but LOST come from? It seems strange to idolize the losing side so much. I can't think of another instance where the losing side is so revered.

A more fruitful question, perhaps is "when" those monuments were erected, which the chart below illustrates, which provides some good inferences about "why" they were erected.

Basically, they were symbols of the reassertion of extralegal white supremacist power over blacks in the South, following the enactment of Jim Crow laws, and then a symbol of resistance to Civil Rights laws striking down the Jim Crow regime a number of decades later.

As William Faulkner wrote in "Requiem For A Nun":

The past is never dead. It's not even past.

Even though the South lost the war, the Union was not entirely victorious in its efforts to win over the hearts and minds of white Southerners. In the Reconstruction following the Civil War, later Union leaders like Andrew Johnson (Abraham Lincoln's successor), made only half-hearted efforts to really deeply assimilate the formerly Confederate states into the Union and when Reconstruction ended Confederate and white supremacist sympathies remained strong.

For example, the Southern Baptist Convention (the largest religious denomination in the American South) only disavowed racism, segregation and slavery in 1995.

To complement to ohwilleke answer:

The original SPLC report for the data in ohwilleke's answer is available online and lists its methodology as well as all monuments and streets/schools that were considered.

Their graphic shows the same tendency of monuments being built in a time of racial struggles: 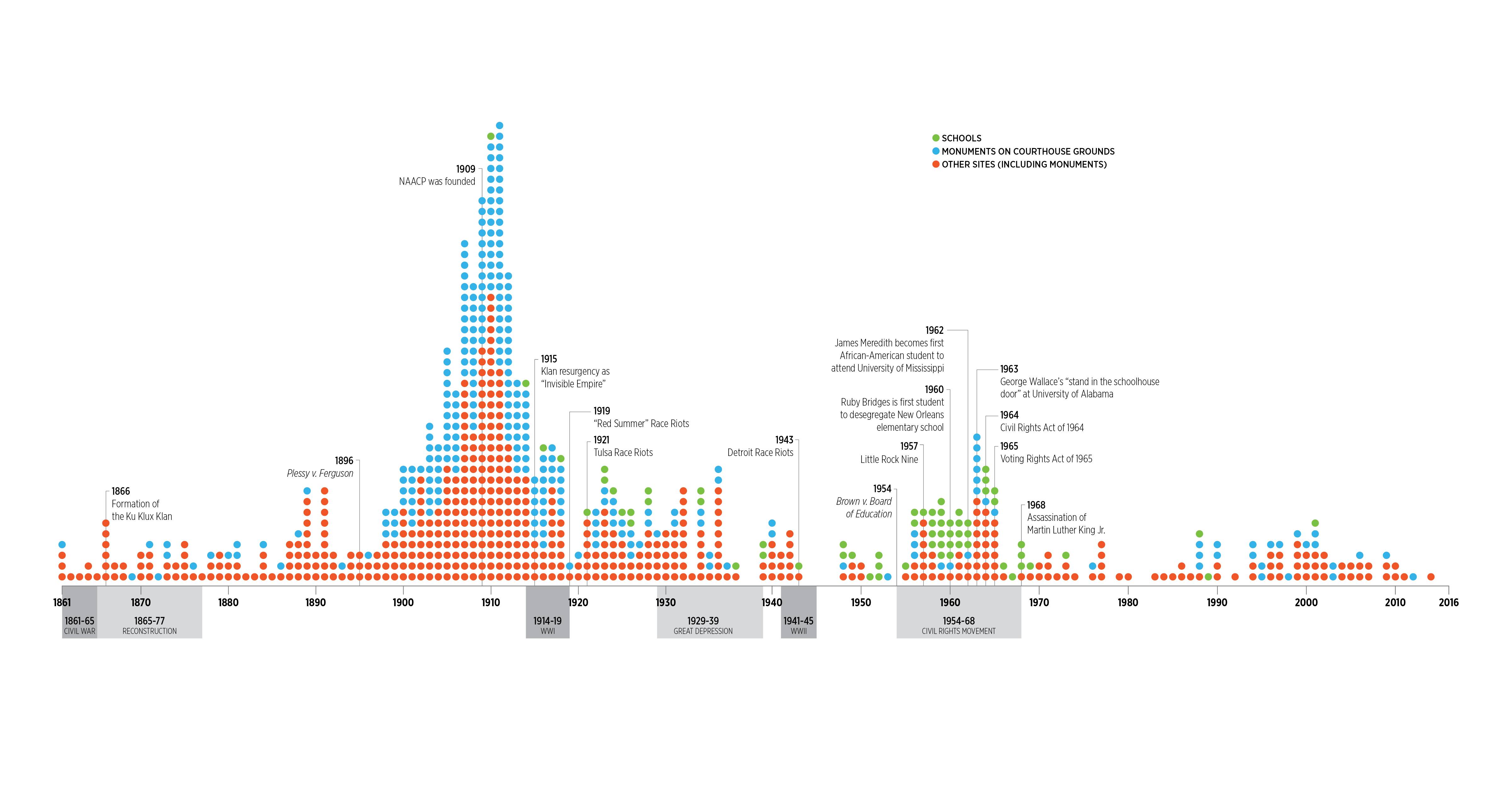 The Washington Post notes that many of these monuments where not politically neutral monuments at the time they were created; instead, the neo-confederate and white supremacist group United Daughters of the Confederacy pushed for them:

The group responsible for the majority of these memorials was the United Daughters of the Confederacy (UDC), among the most influential white women’s organizations in the South in the late 1800s and early 1900s.

The Washington Post also puts this in a historical context:

The 1890s, when the UDC was founded and monument building began in earnest, was a decade of virulent racism across the South. Not content to disenfranchise black men, Southern whites went on a lynching spree. [...]

Amid that brutality, the pace of Confederate monument construction quickened. The UDC and other like-minded heritage organizations were intent on honoring the Confederate generation and establishing a revisionist history of what they called the War Between the States. According to this Lost Cause mythology, the South went to war to defend states’ rights, slavery was essentially a benevolent institution that imparted Christianity to African “savages,”[...]. The Daughters regarded the Ku Klux Klan [...] as a heroic organization, necessary to return order to the South. Order, of course, meant the use of violence to subdue newly freed blacks.

During the era of Jim Crow, Confederate monuments could be placed most anywhere. Some were in cemeteries or parks, but far more were erected on the grounds of local and state courthouses. These monuments, then, not only represented reverence for soldiers who fought in a war to defend slavery, they also made a very pointed statement about the rule of white supremacy: All who enter the courthouse are subject to the laws of white men.

The Business Insider interviewed various historians who agree that the statues were an attempt at historical revisionism:

Soon enough, however, "... public monuments became a central means of rewriting history from the Confederate perspective [...]

Whittenburg said the monuments tend to come from attempts by the political and business elite to "re-enforce or reinvigorate their claim to authority."

Not the answer you're looking for? Browse other questions tagged united-states history civil-war monuments .

49
Is there any other country in the world, besides the US, that erects monuments to those who took up arms against it and lost?

9
Why are political party memberships public in the US?
13
Where did all this deficit come from?
7
Has there ever been an instance where a couple were independently elected to be President of a democractic government?
12
Did Castro seek thermonuclear war with the US?
1
What pressure was President Clinton under when he refused to call the Rwandan Genocide by its name?
42
Why was Singapore chosen to host the summit between Donald Trump and Kim Jong-Un?
9
Is the "Our opponents hate America" meme new?
72
What, if any, are the benefits of tying health insurance to employment (as in the US) over other systems?
13
What are the arguments against abolishing the Confederate flag?