Which US states have the most right-wing, "alt-right", KKK affiliated or neo-nazi groups?

I've been looking for statistics about the subject, out of personal curiosity. I know a lot of these groups have no official records, but some do (like militias, etc). I was wondering if anybody had statistics like the top 10 states with the biggest number of far-right groups.

Following the comments I received I'll try to make my question more precise.

By far-right groups, I mean every group that is publicly known as a hate group with or without ties to the KKK and the neo-nazi movement. I'm not talking about political parties, more about activists groups, self-proclaimed militias and the likes. Any group promoting white supremacy, hate against other nationalities with a tendency for public demonstrations and violent outbursts.

About the numbers, I realize that I was vague about it and also that population density could bias the numbers so obviously getting a number that would take that into account would be the best (percentage of population involved etc.)

I'm well aware that there is probably no publicly available data that is really reliable because of the "covert" nature of such groups.

ABC News has a list of all those organizations designated as a hate group by the SPLC, divided by states. As federal organizations such as the FBI do not keep track of these groups, they are likely the best source you will find for this.

California is currently at the top of their list, Florida is second.

Note that some such as Fox News criticize the SPLC list, as it contains hate groups which fight against equal rights for LGBT people (such as the Family Research Council; in their own words, they oppose the idea that gay people should be treated "equivalent to heterosexuality in law").

Note also that the list does not only contain right wing extremists, but all sorts of extremists.

You can look up the location frequency of the particular sort of hate groups you are interested in on their interactive hate map.

CNN made their own map based on the data (it includes all kinds of hate groups): 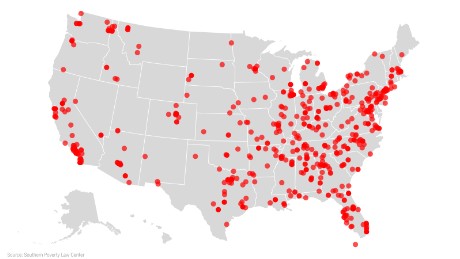 I'm well aware that there is probably no publicly available data that is really reliable because of the "covert" nature of such groups.

We can try Google Trends for hate group websites. This provides relative search rates, so population density isn't an issue.

To select a website, I'm going with Stormfront, mostly because they're the hate website that I've heard most about lately:

Stormfront was a white nationalist,[4] white supremacist[5] and neo-Nazi[6] Internet forum. It was the Web's first major racial hate site.[7]

The map from Google Trends: 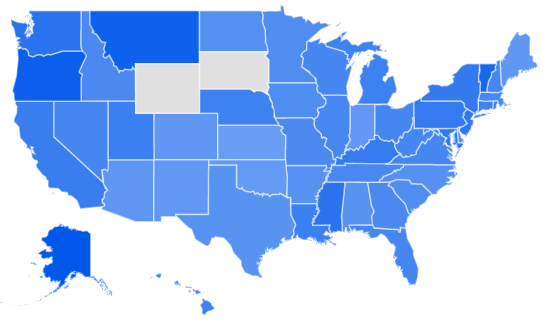 And then by subregion: 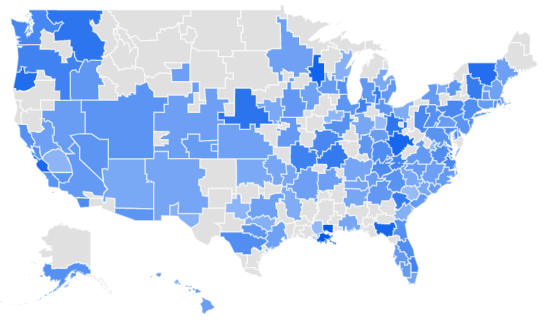 Not the answer you're looking for? Browse other questions tagged united-states statistics alt-right .

13
What is the 'alt-right'?
31
Phenomenon where politically incorrect candidates do better in actual elections than in polls?
18
How does the alt-right differ from the far-right?
2
Why are property taxes higher in some places than others (United States)?
6
Which states returned the most third party votes in the 2016 presidential election?