The paradox of Russian Nazis

It is often reported that Russia has one of the largest neo-Nazi communities in the world. Which to me seems utterly bizarre. As I understand it, Germany's National Socialists in theory and practice, private and public, regarded all Slavic people as little better than Jews or Roma in their racial hierarchy. Their plans to expel, enslave, and murder Russians in order to colonise the east was an inalienable part of Nazism.

How then do those Russians reconcile being Slavic Nazis? I can think of few better examples of Turkeys voting for Christmas. The claim mentioned on Wikipedia is that the German-Soviet non-aggression pact is emphasised as evidence somehow, but that seems to be cherry picking one or two things from a huge amount of evidence to the contrary. Is that an accurate assessment?

Active Oldest Votes
28
Want to improve this post? Add citations from reputable sources by editing the post. Posts with unsourced content may be edited or deleted.

The cornerstones of the ideology of Russian Neo-Nazis is Antisemitism and anti-Americanism. They are better traced to the Black Hundreds far-right antisemitic organization of Russian Empire rather than Nazi Germany (even if they adopted a lot of Nazi symbolism).

As such, most of Neo-Nazi organizations in Russia are patriotic and imperialist. They believe that the USSR and/or Russian Empire were destroyed by the Jews.

They do not trace their origin towards German Nazi Party, and as such, do not claim to share exactly the same ideology.

The predominant opinion on WWII, I think, is "Hitler was doing good job in killing Jews, but he should have united with Russia against the West, but he mistakenly invaded Russia."

Notice that the Holocaust denial is not widespread in Russian Neo-Nazis, they mostly support the Holocaust, or use it to accuse the Jews of being evil ("look, everyone hates Jews, this cannot be for nothing") or claim Russians saved the Jews, perhaps they should not, as the Jews are not grateful enough. 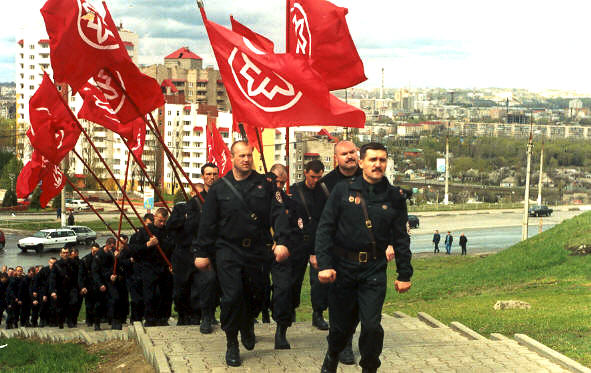 The Neo-Nazis in Russia are mostly anti-American and Antisemitic. They think the Jews destroyed the USSR so to steal property.

I would add that in the Eastern European countries bordering Russia, such as Ukraine, Belarus, and the Baltic, there are many Neo-Nazis, but they have very different ideology compared to Russian Neo-Nazis. They are usually very anti-Russian, pro-Western, pro-American and less antisemitic.

Their ideology is mostly based around local pro-Nazi collaborationist units or organizations during WWII.

They often engage in denial that their local collaborationist units participated in Holocaust and other atrocities (it was all done by the Germans, you know, but we only fought for freedom against Stalinism) and/or claim it was a mistake, excess, exaggerated (by the Soviets), or because of the general cruelty of the war. 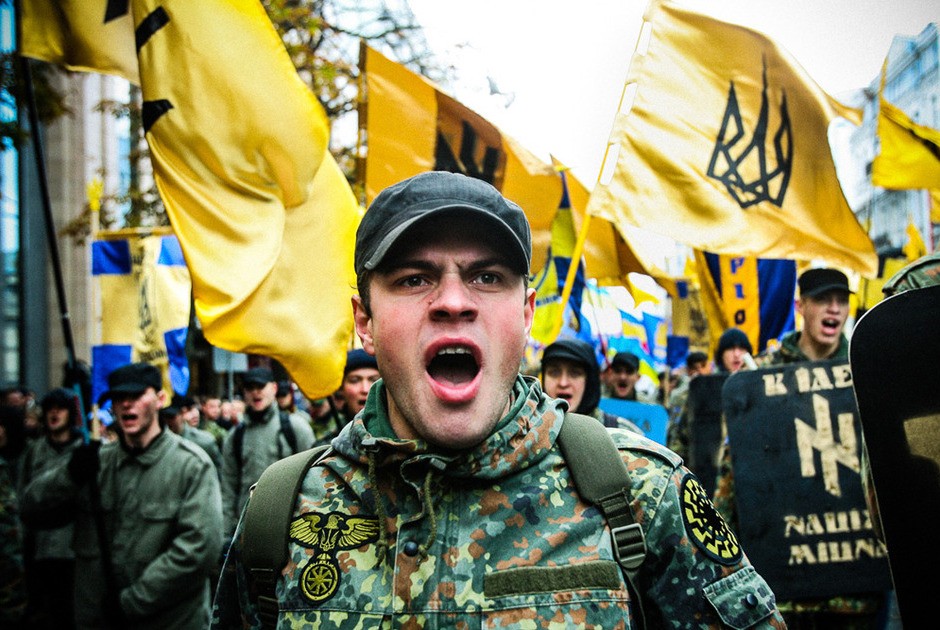 The Neo-Nazis in Ukraine are predominantly anti-Russian and pro-American.

The pro-Russian Nazis are usually more racist and anti-Muslim as well, at least demanding Muslims to be controlled, deported to native areas and giving preference to Russian culture, while pro-Western Nazis often consider local Muslims as "brothers who also suffered from Russian oppression".

The pro-Russian Neo-Nazis are OK about Russian Empire, view the Revolution of 1917 as Judeo-Masonic conspiracy against Russian people, view Stalin in positive light for purging the government from Jews, and usually positive about post-Stalin USSR while hating some of its leaders such as Khrushchev and Gorbachev as traitors. They very much hate Yeltsin, but divided about Putin, with their attitude towards him gradually worsens with time.

You are confusing 2 principles that in 1930s Germany came together in a single political group: National Socialism and German racial supremacy.

This is because the very nature of national socialism makes its adherents consider themselves (and with that their race/nationality) superior in all regards to everyone else.

There is nothing bizarre when come to politics and ideology. – mootmoot

To be honest those people are so uneducated and stupid you shouldn't expect a rationale out of them. – Bregalad

There are groups of people with similar mindsets everywhere, from all races. The only strange thing is that in Russia they did chose the "Nazi" label for themselves (...) I am betting on "brand recognition", even if that implies that implies twisting historical facts and doctrine a lot. – SJuan76

Many of the comments here are right to suggest that most political movements that emphasise cultural imperialism and 'racial superiority' do not need any ideological coherence, but only a self-serving agenda and the right socio-economic 'climate that favors growth.'

Wikipedia suggests that Russia has had this climate after the collapse of the USSR:

The dissolution of the Soviet Union in 1991 caused great economic and social problems, including widespread unemployment and poverty. Several far right paramilitary organizations were able to tap into popular discontent, particularly among marginalized, lesser educated and unemployed youths. Of the three major age groups — youths, adults, and the elderly — youths may have been hit the hardest.

In addition, one of the paradoxical psychological tactics often employed by a sub-section of human beings and societies to maintain internal sense of dignity during or after oppression is to identify with the oppressor.

As is my preference, I'm going to give a philosophical answer to this question, rather than a strictly political one.

Following Orwell's Notes on Nationalism, we can gain some insight into the psychology at work here. The first thing to consider is the way that Orwell defines a nationalist. In his words:

A nationalist is one who thinks solely, or mainly, in terms of competitive prestige. He may be a positive or a negative nationalist – that is, he may use his mental energy either in boosting or in denigrating – but at any rate his thoughts always turn on victories, defeats, triumphs and humiliations. He sees history, especially contemporary history, as the endless rise and decline of great power units, and every event that happens seems to him a demonstration that his own side is on the up-grade and some hated rival is on the down-grade. But finally, it is important not to confuse nationalism with mere worship of success. The nationalist does not go on the principle of simply ganging up with the strongest side. On the contrary, having picked his side, he persuades himself that it is the strongest, and is able to stick to his belief even when the facts are overwhelmingly against him. Nationalism is power hunger tempered by self-deception. Every nationalist is capable of the most flagrant dishonesty, but he is also – since he is conscious of serving something bigger than himself – unshakeably certain of being in the right.

This notion of competitive prestige is central. The nationalist mindset compulsively seeks out contexts in which it can claim superiority for its group. The nature of the context is largely irrelevant: it might lionize a group success or denigrate some failing of another group; it might shift the group it targets as it sees new opportunities to establish prestige; it might be inconsistent from case to case, for example praising some action of its own group while demonizing the same action from other groups. Competition is everything; group prestige is everything; anything else is incidental and changeable.

Every nationalist is haunted by the belief that the past can be altered. He spends part of his time in a fantasy world in which things happen as they should – in which, for example, the Spanish Armada was a success or the Russian Revolution was crushed in 1918 – and he will transfer fragments of this world to the history books whenever possible. Much of the propagandist writing of our time amounts to plain forgery. Material facts are suppressed, dates altered, quotations removed from their context and doctored so as to change their meaning. Events which, it is felt, ought not to have happened are left unmentioned and ultimately denied. [...] The primary aim of propaganda is, of course, to influence contemporary opinion, but those who rewrite history do probably believe with part of their minds that they are actually thrusting facts into the past.

This tendency to ignore historical facticity or to actively thrust imagined facts into the past is part of that competitive process. In order to solidify the prestige of the group, inconvenient facts are overlooked or reconstructed, and convenient myths are elevated to the status of facts. The nationalist mindset has no compunctions about this, as noted, this is all done for the (from its perspective inarguably just) defense and promotion of the cause.

With respect to Russian Neo-Nazis, both of these factors come into play. They focus on those historical facts that cement their identity with German Nazism; they ignore those historical facts which would place them in the 'inferior' category of German Nazism; they likely revise history to place their group within the superior 'aryan' category. History does not really matter to them, as nationalists. What matters is painting their group as strong, morally virtuous, decisive, virile, or whatever other qualities define them as superior. I suspect even their attachment to Nazism is a convenient fiction; something they will all fervently avow to, but which ultimately is only appreciated for the air of superiority it gives them.

Not the answer you're looking for? Browse other questions tagged russian-federation racism nazism antisemitism .

5
Russian sanctions under Trump
10
Is the conspiracy theory of “Cultural Marxism” inherently tied to antisemitism?
6
Did the Nazi regime resort to any nationalizations?
32
What is meant by “the Russian Government Resigned”?
3
Why didn't Nazis have their own constitution?