What are the Realpolitik benefits in taking in refugees from the perspective of Europe?

The principal argument, to my knowledge, that Europe ought to take in refugees from Syria (and other war torn countries) is a moral one. The refugees are innocent victims of brutal wars, the progressives argue, and wealthy European countries have a moral imperative to accept them, house them, and meet their demands.

To make it absolutely and unequivocally clear what I'm asking:

I am not asking why regulated, legal immigration in controlled quantities is in the interest of the host population. There are "realistic" arguments for this (e.g., compensating for declining birth rates, economic growth). Rather, I am referring strictly to the massive and rapid influx of asylum seekers who have came to Europe over the past two years in the so-called "refugee crisis".

First let's take a look at the definition of the word Realpolitik:

Under that definition there are two possible reasons:

There are absolutely no other Realpolitik benefits in accepting refugees as compared to regular and fully controlled immigration routes. There are literally hundreds of millions of people who would like to immigrate to the EU, so the European governments can take their pick in finding the most talented/hard-working people for any imaginable position. Likewise the EU could easily follow America's refugee resettlement programs and accept a limited number of fully vetted refugees, in order to satisfy the moral question of helping people at war.

If you look deeper into the current immigration crisis you will face the following truths:

Therefore the European governments are stuck in a difficult situation with no single, magical solution. Various actions are undertaken by European leaders, such as restricting NGO rescue operations, signing a new anti-immigration deal with Libya, sending immigrants back to Turkey, building a fence on the Schengen border, relocating immigrants within the EU, and so on. Whether or not they will be truly effective is an open question, however the basic problem of handling uncontrolled immigration will always remain on the table while operating within the constraints I've mentioned above.

It should also be mentioned that Europe's leaders are very much acting in terms of Realpolitik despite what anti-immigration activists might have you believe or what the leaders themselves might say on TV. No country in Europe is making it easier for refugees to get to their territory and all of them are happy to deport people abroad whenever the circumstances allow for it. The only real difference between Japan (which is hailed as a homogeneous heaven by nationalistic parties) or Australia (known for its maritime border protection policies) and the EU is that European politicians maintain a facade of supporting the right to asylum. Otherwise their practical policies are very much alike.

The right to asylum is an inherently moral issue, and removing that aspect of it is nonsensical.

But as that is your question: Ignoring the countless moral arguments, there are a couple of realpolitik benefits that are sometimes named.

TL;DR: Europe is a) merely being pragmatic about the situation and b) acting in its long-term self-interest.

First off, keep the numbers in perspective. However massive the recent influx of migrants looked to European eyes, the scale of the problem is even larger. Arab countries are dealing with an order of magnitude more migrants than Europe.

Next, consider a (not so) alternative universe where countries don't accept asylum seekers.

This would mean refugee camps set up at the border of the originating country. Until their situation is regularized, refugees aren't allowed work legally. The only thing they can do is sit in the camp all day and rely on food donations etc. Wars can last a long while, so this untenable situation can last for years on end. (In even worst case scenarios, refugees also lose their nationality.)

In a refugee's shoes, would you try to seek asylum somewhere in order to move on and build a new life, or would you be satisfied with just sitting there, doing nothing, with no prospects nor future? I think it's reasonable to imagine most people picking the former. What more, the refugees aren't in this situation by choice; those who drove them away by fighting a civil war forced their hand. So it's reasonable to think that accommodating these asylum seekers somehow is the pragmatic (to say nothing about moral) thing to do.

Lastly, note how long-term refugee camps have bred resentment and extremism in the past. The alternative to migrants, in other words, is breeding grounds for extremists - i.e. something no one wants. The West is as such better off when asylum seekers are being welcomed somewhere.

In practice this means footing the bill (like the US has been doing) or being reasonably welcoming to those that reach its borders (like Europe has been doing, but also Syria's neighboring countries and elsewhere).

There are several factors at work.

German population is declining. They need at least 100k immigrants a year by 2060 to slow down the process. In 2060 People over 65 will make up 30% of the population.

Without immigration in 2060 one working person will have pay for one pensioner, health care, social benefits and the rest of government infrastructure. That's impossible. Merkel invited the immigrants on purpose, just too many people came. Humanitarian arguments are just propaganda.

This is a serious problem. Let's take as an example age pyramid in Germany in 2005 and focus on people age 35-45 and compare it against age 0-10. In 2030 the first group will be still alive but retired, they should be replaced by group 0-10. It won't happen, there is a 6000k gap and this won't change unless Germany would integrate 6000k immigrants. 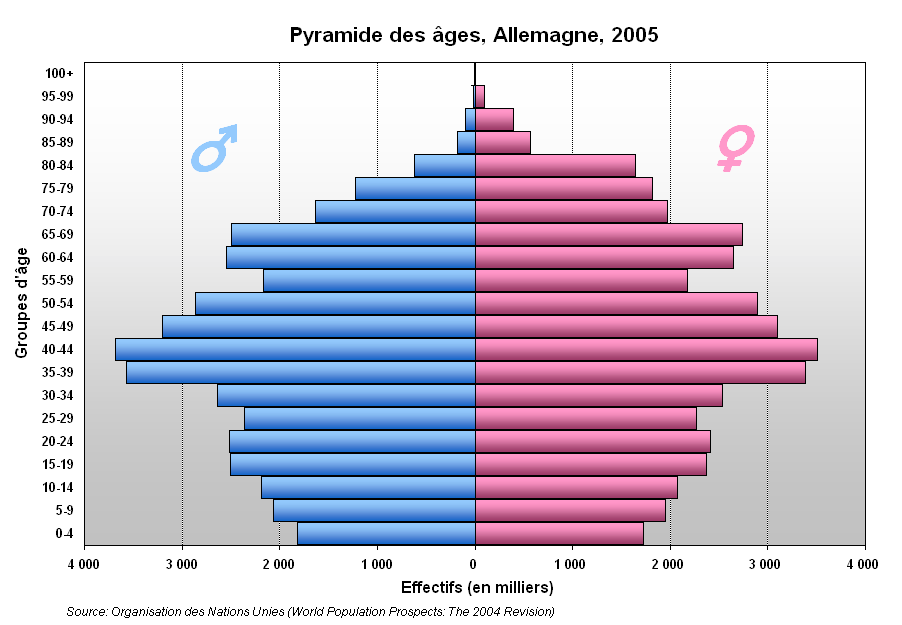 Only Arab countries can fill in the gap. Here is the same age pyramid for Egypt in 2005. 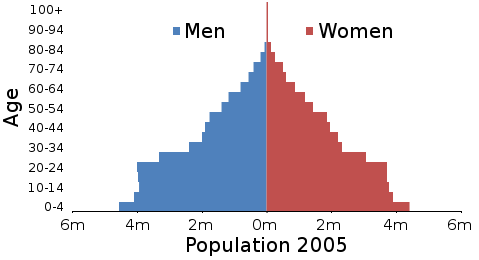 Sure, there are quite a few.

You see, there are quite a few selfish issues regarding taking in refugees although it's doubtful they overall add to a positive value. My guess is that the morale arguments are still the main motivation behind.

Please note that some of these selfish reasons may also be achieved by intentional, directed immigration.

First, policed borders are a relatively recent innovation, they became much more common after WWI; second, Muslims are hardly alien to Europe, they are native to large parts of the Balkans, of course there is the modern migration into Western Europe in the 20C, they account for roughly 20 million citizens, around 4% of the population; were another 5 million to immigrate that would only push up the percentage by another percentage point.

The realpolitik answer is that nations have treaty obligations, and in this case it is the 1951 Convention on the Status of Refugees, and the 1967 Protocol that amended it. The '51 Convention was primarily constructed to protect European Refugees in the wake of WWII and limited itself to those, the 1967 Protocol applied to refugees "without geographic limitations"; currently 148 nations are party to the Convention & Protocol, with India & Saudia Arabia being the major abstainers. The Convention described refugees as:

A person who owing to a well-founded fear of being persecuted for reasons of race, religion, nationality, membership of a particular social group or political opinion, is outside the country of his nationality and is unable or, owing to such fear, is unwilling to avail himself of the protection of that country; or, who not having a nationality and being outside the country of his habitual residence as a result of such events, is unable or, owing to such fears, unwilling to return to it...

It doesn't concern itself or cover economic migrants. Given that the situation alluded to, is more or less, the outcome of the destabilisation of the Middle East by the USA led 'War on Terror' - that is the Invasion of Iraq and it's consequent aftershocks, one could say that there is an additional moral burden for the West to bear in mitigating its effects.

The treaty is legally binding, however there is no monitoring mechanism to enforce compliance or endorse sanctions; the Convention itself specifies that complaints should be referred to the International Court of Justice.

Because some people want to avoid war at any cost.

Stopping refugees requires the use of force. As non-lethal force works for a limited time only, at some point lethal force will be required. And many people do not want that kind of force to be applied.

They judge the cost on short time frame - applying lethal force - greater than the cost on a long time frame. A.k.a. the "apres nous le deluge" approach.

26
What are the consequences for a developed nation to not accept any refugees?
18
Is there a benefit to limiting immigration to the UK?
4
Why is Islamophobia not as demographically widespread in the USA?
13
Why isn't Japan criticized for its refugee policies as much as other developed countries are?
5
Why do refugees come to Japan?

37
What are the key factors for the rise of nationalism in Europe?
1
Are there any serious proposals for using Australia's solution for the refugee problem in Europe?
3
What are the political arguments for helping refugees within the country rather than helping refugee camps abroad?
26
What are the consequences for a developed nation to not accept any refugees?
9
What specific measures has Turkey taken to stem the flow of refugees to the EU?
49
Why do Muslim refugees seek asylum in Europe and not in rich countries in the Middle East?
8
What is the EU's official explanation for why it's opposed to refugees arriving via Belarus?