How do very small countries prevent foreign interests from buying out their political elite?

Let's take Iceland as an example. They have only 338,000 people and their GDP was a mere $20 Billion USD in 2016. There are therefore several billionaires who are richer than the entire economic output of the country.

What prevents rich foreign interests from funneling tens of millions of Euros to Icelandic elections in order to elect people who are conducive to their interests? Or perhaps it's already happening and all small countries are controlled by their larger neighbors?

In a small electorate, personal relationships are more important than media spending; and voters are likely to resent attempts at outside interference.

An extreme example occurred in the 2008 general election on the island of Sark in the English Channel.

Sark had a total electorate of only 474 people and elects a parliament of 28 members. The Barclay brothers, whose net worth at the time was approximately GBP 1.7 billion, live on a neighbouring island and attempted to promote candidates friendly to their interests.

Their efforts were not successful: Seats were won by only 2 of the 9 candidates endorsed by the Barclays, and by 9 out of 12 candidates the Barclays had denounced as undesirable. The Barclay brothers subsequently attempted economic punishment of the islanders, which failed to secure the influence they wanted:

When it became apparent that only about five candidates they had supported had been elected, the Barclay brothers announced that they were shutting down their businesses on Sark — hotels, shops, estate agents and building firms — leaving about 100 people, or a sixth of the population, out of work. The closures started almost immediately following the announcement. Diana Beaumont, the wife of Seigneur John Michael Beaumont, commented that "[the Barclay brothers] were the ones that started all this democracy business, now they don’t like it because they haven't won." The States of Jersey, sitting in session on 12 December 2008, resolved to send a message of support to its sister island of Sark.

In January 2009, the Barclays quietly began reversing the shutdown process.

Further attempts by the Barclays to assert greater control over Sark have also been unsuccessful, and they lost a legal battle with the island's government in 2014.

What prevents rich foreign interests from funneling tens of millions of Euros to Icelandic elections in order to elect people who are conducive to their interests?

Because money doesn't win elections. Votes (sometimes in the right places) do.

There are of course many more examples of the better funded campaign winning. But there is a simple reason for this. Both votes and contributions are signs of support. So more support usually causes both contributions and votes. But when support diverges, votes win.

Clever use of money may be able to allow someone who is relatively unknown to become known. But it can't make a candidate with an unattractive message win. A simple counter message can work if it is believable. E.g. "The Iceland candidate, not the foreign billionaire candidate."

And all this assumes that rich foreign interests care about Icelandic elections. Yes, a Bill Gates could afford to outspend domestic interests and flood Iceland with advertising. But why would he want to do so? Why not spend the same amount of money on an election in some place where he actually lives? Or spend it on something other than elections?

Contributions aren't magic. They don't automatically confer anything. Candidates still have to convince people that their positions are good. Money just helps them get out the message. And even if Gates (or whomever) succeeded, what could the Icelandic government do for him? He doesn't live in Iceland nor do business there (except in that Microsoft does business everywhere). He would probably rather control Microsoft than Iceland.

Businesses do confer ownership with money. Microsoft has nearly three times as much revenues as Iceland has GDP. And Gates' Microsoft stake pays him money and makes him richer. Why would he sell off some of his ownership of Microsoft to meddle in an election that doesn't really matter to him?

all small countries are controlled by their larger neighbors?

If Mexico is controlled by the United States, then why aren't they building Trump's wall?

Probably having laws and a civic philosophy in place that does not encourage or legalize graft and bribery. We see that many small countries struggle with it, but the ones that don't have rules and laws in place, and probably a great degree of transparency to the citizens, as well.

The problem with trying to get an American brain around that concept is that it is so unrelated to the system and philosophy we have here, that the very idea is "foreign," in several ways.

Both Iceland and Sweden, to cite two examples, have public financing of their elections. There is no unlimited ability to spend/buy one's way to office, there is no fundraising component to political service and, therefore, there is no mechanism for a wealthy oligarch to purchase his/her chosen candidates a seat.

Short answer to your question is this:

This is probably happening in all countries in some extend. What sets apart a small county from another small country in terms of overall prosperity depends on the way the institutions of the country work.

As argued by Daron Acemoglu in the book “Why nations fail: The origin of power and Poverty” (which I highly recommend) the man-made political and economic institutions underline economic success of a nation. 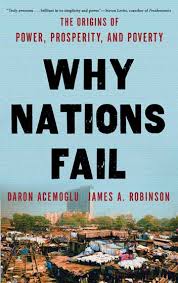 If you live in a society that creates incentives and rewards innovation in a way that allows everyone to participate in economic opportunities and there is ACCOUNTABILITY in all levels then foreign interests and in extend who actually governs are irrelevant in the big picture of prosperity.

Living in Denmark, I'd say that nothing is holding big < insert industry > back from buying politicians. Our political parties don't disclose who gives them funding, simply because it isn't required by law.

This has led to politician pushing for wider laws regarding what they must make public. Recently our tax collection agency "just plain lost" about 19 billion USD as a result of a lax corporate oversight.

Media has stopped covering this, and other scandals have arisen since. But I'm pretty sure, that at least, Danish politicians increasingly act in favour of who really pays their salary.

First, you have to keep in mind that a small country does not usually give as many "benefits" as a big country.

Another variable to keep in mind is that there is not so much difference between a politician from Ireland and one from the USA. Is it cheaper to buy a politician from a small country? (With respect to the relation quality / price)

Another question, why is a small country easier to buy? There are small countries like Monaco, San Marino, Luxembourg or Ireland itself that have very transparent tax and political systems.

Another issue aside is the third world countries.

Not the answer you're looking for? Browse other questions tagged campaign-finance .

63
How can the influence of wealthy individuals on democratic processes be reduced?

17
How can I figure out how much money a political lobbying group has given to my congressman?