How does the argument go that gerrymandering restricts freedom of association?

According to a the Washington Post's The Supreme Court will examine partisan gerrymandering in 2017. That could change the voting map.:

One thing that distinguished Whitford from the many previous unsuccessful challenges was that it was based on a First Amendment freedom of association test rather than a 14th Amendment equal protection test.

According to Wikipedia's artice on Freedom of Association:

Freedom of association encompasses both an individual's right to join or leave groups voluntarily, and the right of the group to take collective action to pursue the interests of its members. Freedom of Association, The Essentials of Human Rights describes the right as coming together with other individuals to collectively express, promote, pursue and/or defend common interests.

How does the argument go that gerrymandering restricts freedom of association? Is this a new argument, or has it been used in the context of gerrymandering previously?

below: Illustration of gerrymandering from here. 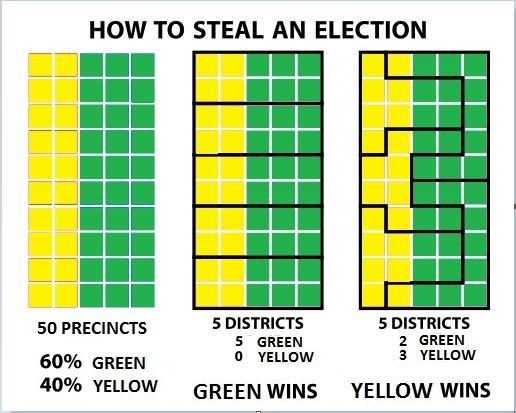 On June 18, 2018, the Supreme Court found by a 9-0 decision that plaintiffs, in Gill v. Whitford, did not have standing to pursue an Article III case. Ultimately, the case was returned to the district court and "On July 2, 2019, the court dismissed the case."

If there is an objective criteria for drawing boundaries in a logical, geometrically simple method, then, for the most part, where I choose to locate my residence is my decision about what voting district I wish to inhabit.

If a district's boundaries are drawn in a geometrically bizarre fashion, to ensure one party or another has power, then I've been included in one "group" (4th Congressional District voters) and excluded from another (3rd District) without my consent and against my will.

Again, if there is an objective criteria, my district might still change with redistricting, but not with the conscious intent to force me into a particular group, as opposed to my district changing without concern or intent about which group I may or may not belong to.

I think that's the crux of that particular argument, based on the information you have in your question about it.

The only current way a gerrymander is considered unconstitutional* is if it serves to disenfrachise protected classes (e.g. people of a specific race or religion, or probably things like gender). The "Freedom Of Association" argument is that because being able to join one party or the other is a voluntary association, political affiliation should be added to the list of protected classes.

*Or if the areas had different population sizes, so one Representative had 1,000 constituents, and another 1,000,000.

Previous objections to partisan gerrymander were about voting rights, that is that they were "wasting" your vote by packing you with like minded people, violating the idea everyone's vote should be equally valuable (that is, under the second, asterisked, reasoning). This failed, as the Supreme Court said it was a "political question". This, on the other hand, is claiming you are being discriminated against for party affiliation.

Please note that it would still be possible to have a partisan gerrymander. But there would be a burden put on the gerrymanderers to find a plausible reason to draw the map like that that wasn't partisanship based. And the Supreme Court may change that rule based on other cases they will hear in 2017.

8
What is the origin of the "two-tiered" theory of the First Amendment?
10
Does freedom of association give private organizations the right to discriminate on a religious basis?
12
How does gerrymandering work in the US?
6
Why is the efficiency gap (to measure Gerrymandering) higher when the voter repartition is perfectly uniform?
22
Is this proposal by U.S. presidential candidate Pete Buttigieg to change the composition of the Supreme Court constitutional?
14
How would one prevent political gerrymandering?
3
Is freedom of the press covered under the 14th Amendment to the U.S. Constitution?
11
Has the US Department of Justice made an attempt to define what is or isn't journalistic activity? Developing new policy, but to what will it apply?