Why do many states in America have straight borders?

Most of the states in America have straight borders. Many appear to have been designed to be free from any curves or angles. Why were they designed like that? 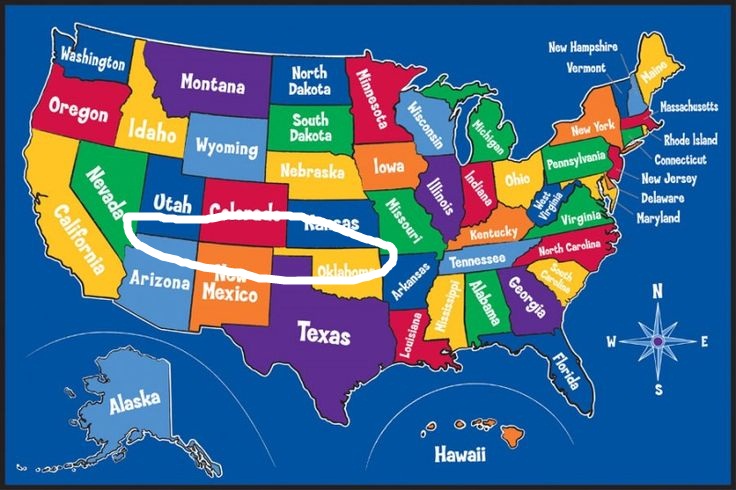 The western united states came into being long after the eastern (states were added from east-to-west). As such, a bit more time/thought was put into getting them set up with their borders.

When the border is natural, such as a river, that's the easiest solution, as the river, though windy, is a pretty clear separation of land mass.

When we have to make the borders ourselves, the easiest line to create is a straight one. As such, whenever possible, straight lines were used.

In other words, the answer is: geometry

For a much more detailed history of each state's borders, the History Channel created a series about this very topic:

Straight borders are always easier to define and codify. The more interesting question is why aren't they all straight? Many non-straight borders follow geographical features like rivers and mountains, but there's another aspect to account for...

When any particular border was defined there may or may not have been people already living within/around the borders. When borders come through/across/near highly populated areas, there are many people with a stake in how the borders are drawn which leads to lots of negotiation over exactly where the border will fall and with what shape. When they eventually settle on something it looks very random, going between the boundaries of smaller lots of land. Typically when you see a border that is very straight, it means that it's in the middle of nowhere, or atleast it was when drawn. No one cared enough to argue about it and so an easy straight line was made. Or else the border was imposed on people who had no political power to negotiate the line.

That's the Missouri Compromise line. As part of the compromise to admit Missouri as a slave state*, the Senate drew a line west based on latitude. States above that would be free, below that would have slavery. Missouri was above that line, as well as Kentucky, Virgina, Maryland and Deleware. Those were to be allowed to persist as slave states.

California entered the country as a different entity with predrawn lines, and Nevada's southern border looked like a continuation of that line before the Civil War.

Borders are straight lines when the people who drew them did not care about what they meant for the people on the ground. They only wanted to get it done with easily. Such a border may split a house from the fields, run through a community and is often difficult to mark on the ground. Even if the area is thinly populated there are people affected.

An extreme case is the borders drawn by the British and the French in the Middle East after WW1.

Why some of the states have seemingly straight lines is partially because of the Public Land Survey System (PLSS). This system is used almost exclusively on land the US obtained after the Revolution, the east coast continued to use the Meets-and-Bounds that was inherited from the British. Colonisation was fairly organic in growth but the Western annexations were a top-down approach thanks to Thomas Jefferson.

The PLSS uses axes of origin called base lines and meridians. From here the original surveyors used literal chains and stakes to create a grid system of specific size to survey the newly acquired land. To find a specific cell you have to know the Township, Range, and Section number desired. 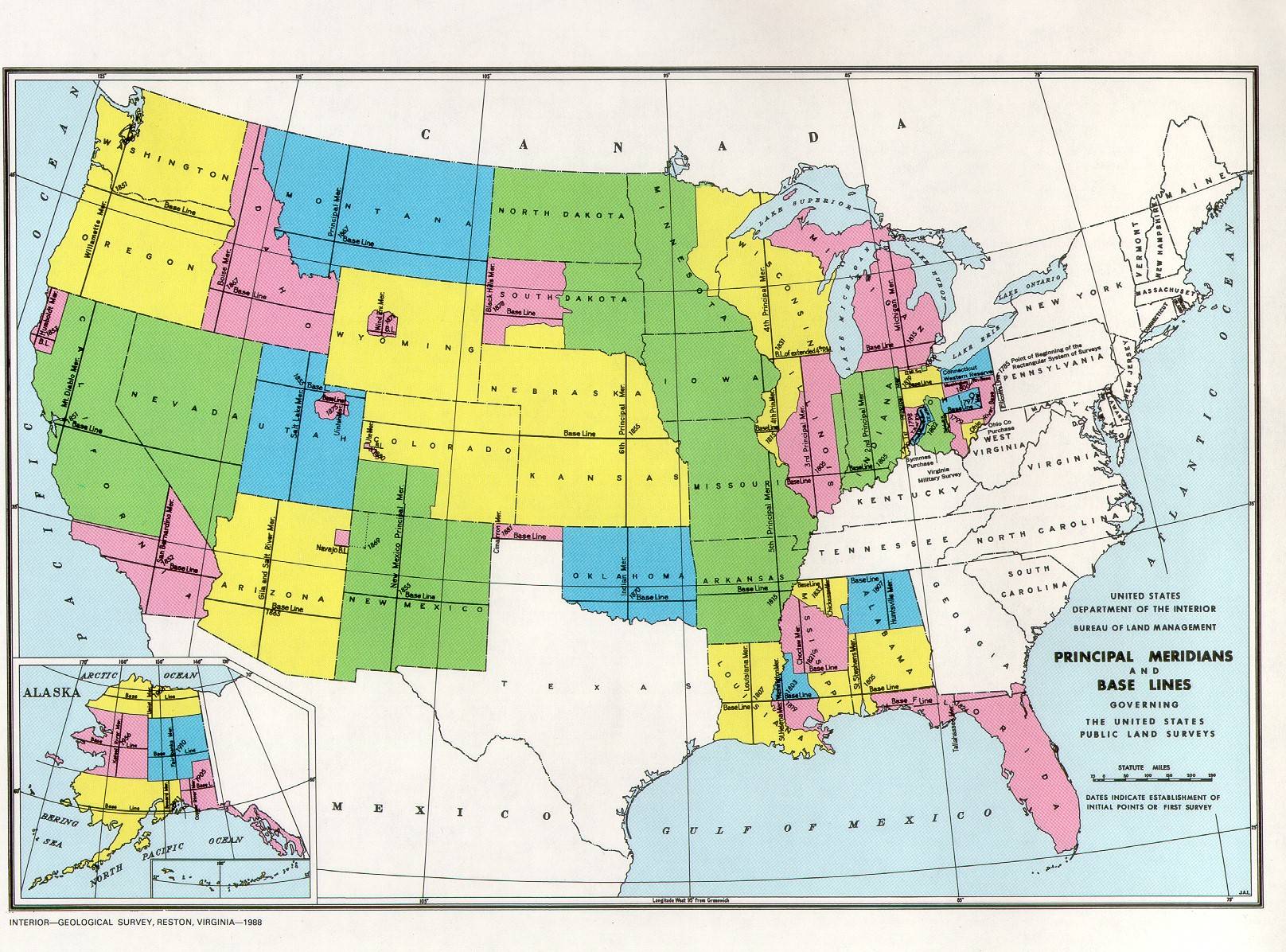 As the federal government gave land to citizens through land grants or patents, they were described using the PLSS. These patents were usually describing the land granted by the NW 1/4 of the SE 1/4 of Section 1 of Township 1 of Range 1, also described the county the land was located or the territory. You can still find the original patents of land by searching the Bureau of Land Management's website. Today, when land is subdivided or needs identification we still use the PLSS in legal land descriptions.

So as states were admitted to the Union they usually drew their administrative boundaries along the same grid using the same technique because it already there. You can't really own land you can't define and the federal government already surveyed the land, it made sense to go with the grid than send out surveyors to create winding boundaries. Why reinvent the wheel?

If you superimpose the modern PLSS with state lines you will see that they are not a nice neat grid (and probably were not to begin with) and the boundaries don't line up with all the Section boundaries. As measurements improved, mistakes made, the geodetic shape of the earth improved, changes in administration of the PLSS, many of the grid cells are not uniform is size, they have staggers in their ranks and files. 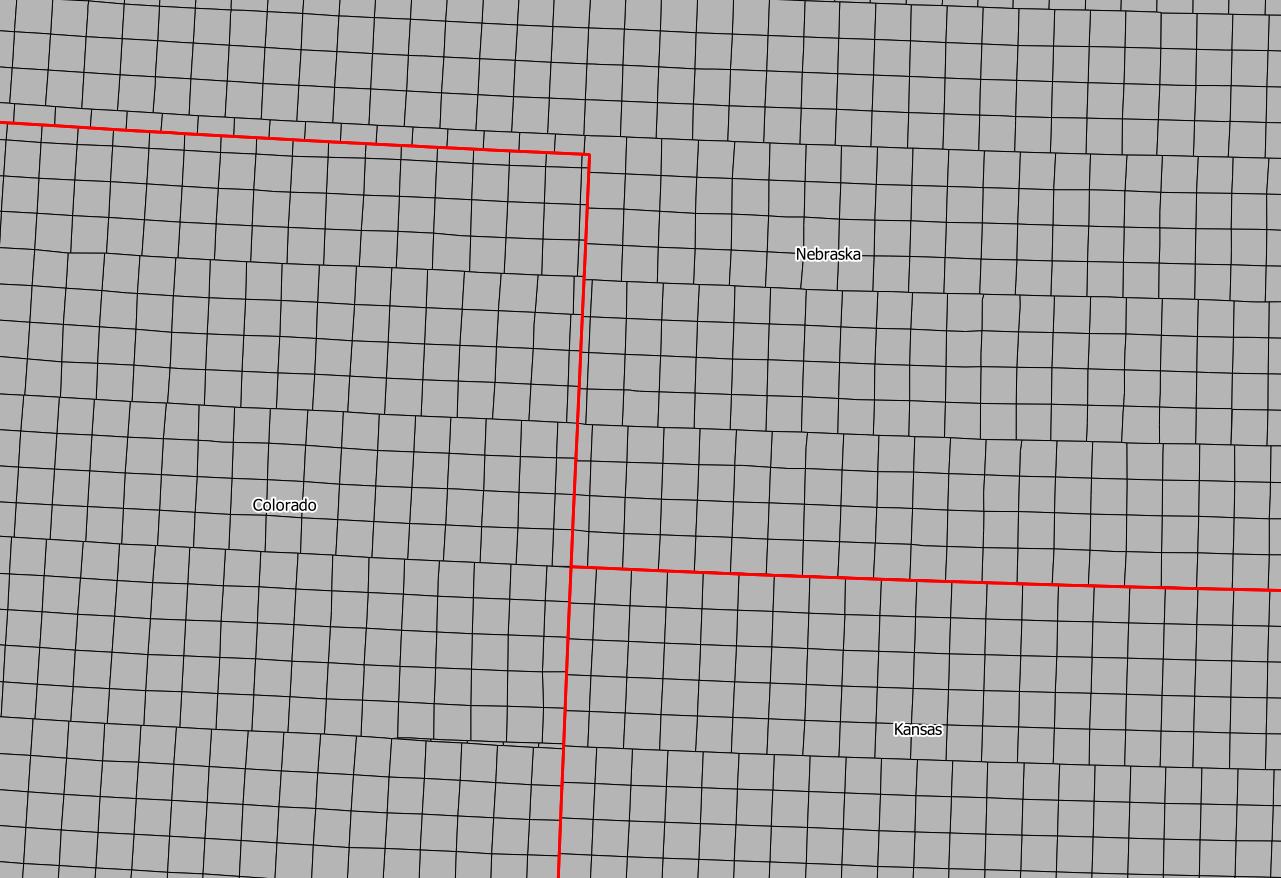 Of course this answer ignores some of the preexisting boundaries that may have existed nor does it answer why they followed a geographic feature instead; though probably it was convenient at the time.

The US state borders have a much shorter history than many other borders in the world, and partly for that reason they were not redrawn several times by violent conflict, separatism, the need to share sovereignty among different rulers of an empire and other forms of power-play. The impression o big land masses and rivers on borders are often just an expression of these power-plays as they make conquests of war more difficult.

There are only a couple of states that are completely squared/rectangular, so it's obviously a combination of straight, artificial and natural borders.

Why do this? If one is going to have boundaries, at all, the point is so people know which territory, state, country, back yard they are in at any given time. Keeping things simple makes everything related to the borders more simple. That would be the main reason, I'd guess.

If a border randomly zig-zags and winds, there would be considerable uncertainty, at any point along that border, any time any event happened near the border. Even with our modern geo-location and satellite imagery, it's not an easy thing to determine at any given time. What if you don't have a cell phone, a laptop computer, or you are somewhere remote where data services are limited? Finding that border line and marking it is very straightforward if, at any point along a 276 mile length, the eastern border for Wyoming is at exactly 104° 3' W longitude.

The more appropriate question would be, if there is no natural physical boundary, why wouldn't someone use a straight line? Certainly true for modern times, especially true "back in the day" before modern technology.

21
Why didn't Liberal states all have state run health care?
4
Why have the Republicans been pressured to repeal Obamacare straight away when Obamacare itself took years to negotiate?
26
Why do so many US States have a relaxed vehicle inspection policy?
10
What are the consequences if the House of Representatives condemns Trump?
3
Why does the Federal Government of the United States not have a plural executive, like most of its states?
5
Why do many states in the US often elect state cabinet members?