What is the opinion of non-Catalan Spanish citizens regarding the use of force to subdue the Catalan independence?

Recently there have been a lot of news regarding the police involvement in the Catalan independence referendum, where 2 people were seriously injured. Have there been any polls in "mainland" Spain regarding the recent intervention and the general question of using force to subdue the secession movement?

I presume most non-Catalans don't support the secession in the first place, but it's not clear if they support harsh measures from the government in Madrid.

There's been indeed polls about it. I could find one in the Spanish digital newspapers El Español and the results are a bit shocking: as many Spanish people agree and do not agree with the use of force. However, in Catalonia there are 8 times more people against it. And, in fact, if you substract Catalan people from the Spanish overall, there is a 50% of people in favour of them, while less than 40% are not.

Numbers come from a poll on 800 people: 400 living in Catalonia and 400 living somewhere else in Spain.

From El 46% de los españoles rechaza las cargas policiales del 1-O y el 44% las aprueba, that is: 46% of Spanish people are against police charges from 1-O and 44% agree with them. 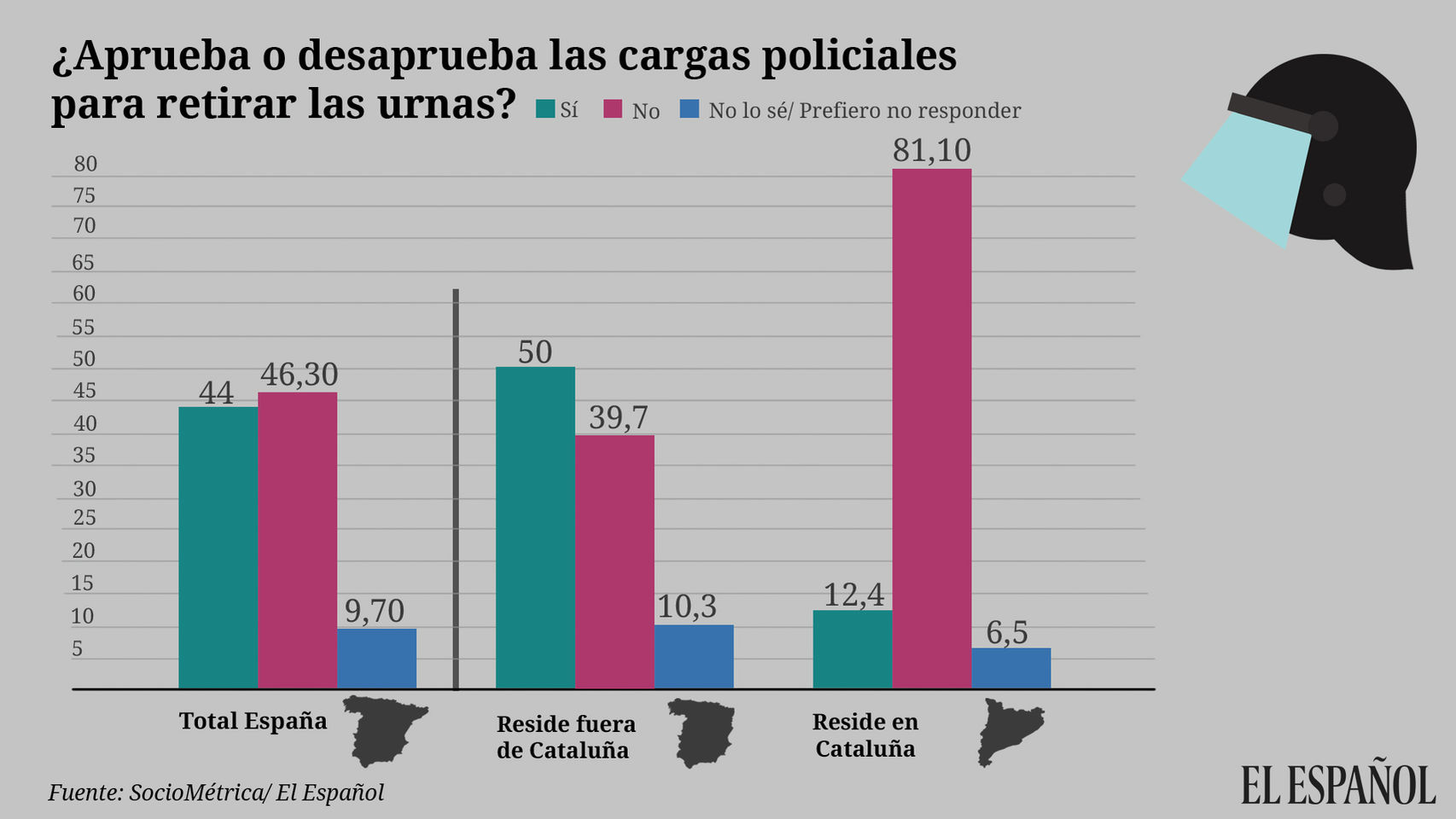 Going through all the results on the poll Un 61% de españoles, pero sólo el 30% de catalanes, "aprueba" el mensaje del Rey that is, 61% of Spanish, and just 30% of Catalans, "agree" with King's message reveal other interesting details, such as 61% of Catalans seeing King's message as something that has weakened his position, while less than 30% thinks it got stronger.

Not the answer you're looking for? Browse other questions tagged public-opinion catalonia spain .

0
How many people were seriously injured during the Catalan independence referendum?

12
If the independence vote in Catalunya is successful. What are the possible outcomes?
5
What proportion of the electorate in Catalonia speaks Catalan natively?
3
Have Catalonian politicians addressed a scenario where one or more border districts would prefer to stay with Spain after the independence?
24
In what way is the Catalan referendum illegal, rather than inconsequential, under Spanish law?
7
What is the position of the main Spanish Catalonia independence movements on French Catalonia?
5
What are the real cost for companies leaving Catalonia?
5
A Spanish judge has jailed two key members of the Catalan independence movement. Have others been ever accused and convicted for sedition?
6
Why are Spanish parties imposing new elections in Catalonia?
30
How much is Catalonia complying with Madrid?