What other European countries are experiencing independence movements?

UK, Spain, and now Italy have regions that have held referendums on independence or autonomy after the leaders of Italy's two wealthiest northern regions have claimed victory in a non-binding referendum, seeking greater autonomy from the central government in Rome. Autonomy and devolution can be a step toward full independence.

What European countries are considered to have regions that are reasonably likely attempt to gain independence?

The current vitality of independent movements is greatly exaggerated. You cannot assume that opinion polls and speaking about independence are the same thing as actually trying to get independence. Gaining independence is hard.

There are a few countries, or regions, that are already de facto independent such as Transnistria or Kosovo, but do not have official recognition.

There are a few regions that have historically tried to get independence, even with terrorism, but do not currently have a serious movement for independence, such as Corsica or South Tyrol.

There are a few regions that could probably create a serious independence movement, because they have strong regional identities and parties. These are regions such as Bavaria or Flanders. However, they are not currently doing that.

There are a few regions that have expressed the desire to get independence and actually done something about it:

Finally, there is a region that is de facto independent, but is trying to get back with the rest of the country: Northern Cyprus.

[1] That is not to say that there are only two possibilities: terrorism/violent rebellion or autonomy. It just happened that both groups did the same things together. Thanks to @inappropriateCode for having pointed out the bad phrasing.

Quite a few European countries have separatist movements. Countries with notable ones include:

A few movements achieved de facto independence, though with limited recognition. Countries with such separatists movements include:

Depending on where you draw the line (amount of popular support, how active they are, etc.), you could continue listing quite a few other European countries, including: 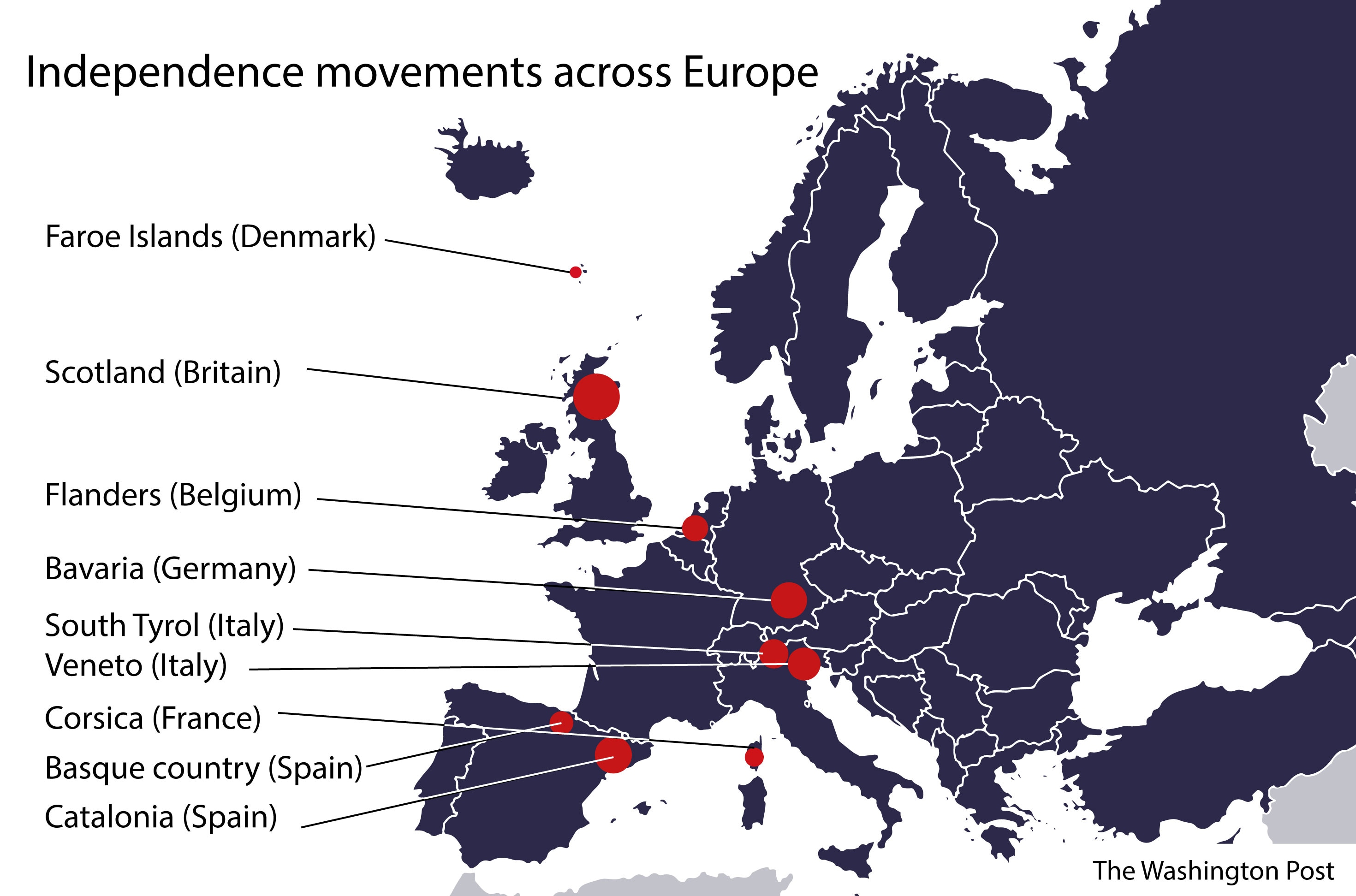 Belgium is under threat of being partitioned.

Looks like Europe is going back to the Nation Statism of Greek civilization.

Quite a few people have indeed already mentioned regions that wish to become independent from their current internationally recognised mother-country.

Besides the common suspects (Catalonia (Spain); Flanders (Belgium); Frisia (The Netherlands); Scotland (UK); Basque (Spain/France); Bavaria (Germany); Corsica (France);...) - There is also Székely Land in Romania, and of course in Ukraine, you have Donetsk.

What is interesting however is the creation of the Committee of Regions, a body of the European Union that allows these regions to be heard and have their own political influence. In its footsteps, various organisations working together with these regions have sprung up (AER or Fedra for example).

All these regions that have very definite identities make use of this portal to work from their respective regions. Some even have said - or least voiced their hope - that Europe is growing towards a federation of regions.

The problem is that with a continent were history has spilled so much blood, and contemporary history has abused identities (whether it be religious, linguistic, ethnicity, culture, or simply aesthetic (the colour of your skin)) so often, it will be decades before people can see past these divides (if ever).

One movement missing from the above lists is the movement of Hungarians of Transylvania (they are also called Szeklers or Szekelys): https://en.wikipedia.org/wiki/Sz%C3%A9kely_independence_movement

Not the answer you're looking for? Browse other questions tagged europe secession local-autonomy .