Here are two cropped stills I prepared from the documentary 陳定南的故事：青天典範 - 龜毛之必要 The Story of Chen Ding-Nan: The Need to be Nitpicky, which I believe show the Minister of Justice of the Republic of China (Taiwan), Chen Ding-nan (Chinese name: 陳定南) (right), and the Attorney General of the United States of America, John Ashcroft (left), in The White House in Washington due to the signing of the Mutual Legal Assistance in Criminal Matters between Taiwan and the United States on 26 March 2002. In fact, the agreement was signed by C. J. Chen and Dr. Richard Bush in Virginia, but it is insinuated in the documentary that the signing of this agreement was the motivation for the invitation to the White House: 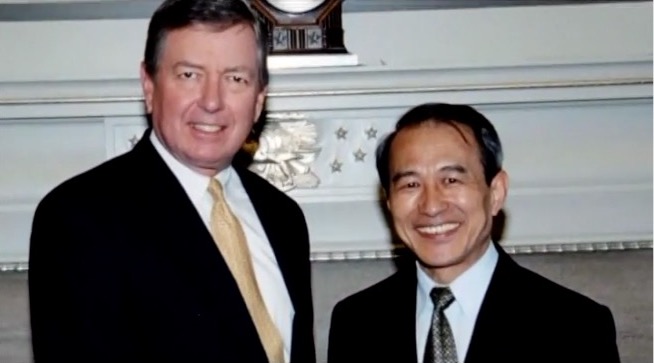 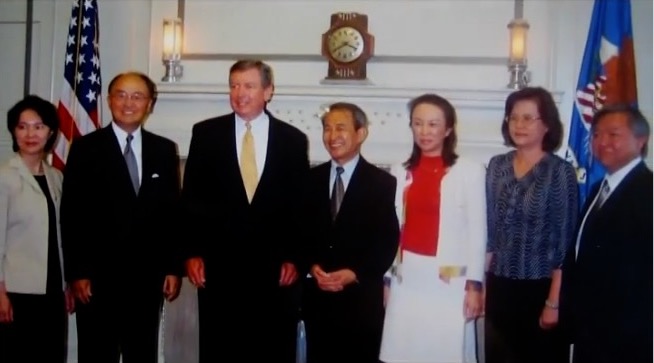 I am looking for official pictures. I have tried to search e.g. through the VOA's archives, but have had no luck finding them.

Some background information (subtitles from the mentioned documentary):

In 2002, Taiwan and the US signed a Judicial Mutual Assistance Agreement. Chen Ding-nan became Taiwan's first government official since the US cut diplomatic relations in 1979, to be invited to visit the White House. The process of signing the agreement was actually very dramatic. The US was dealing with the September 11th attacks and taking precautionary measures against terrorism. The country needed support from many countries, including Taiwan. Minister Chen invited a US diplomatic representative in Taiwan to his office. He then told him,"I want to go to the states to discuss matters regarding judicial mutual assistance." From the very beginning he declared that he wanted to go to the White House and meet the US Attorney General, who at the time was John Ashcroft. You know, at the time, Taiwan and the US did not have formal diplomatic relations. So this was a tricky situation. Up until the last minute, the message we received was that the highest official Chen would be able to meet would probably only the Deputy Attorney General. At the time Minister Chen still stood his ground saying,"I can not accept these circumstances." It wasn't until the very last minute that we were notified, that tomorrow's meeting, the US Attorney General himself would meet with Chen. Minister Chen was extremely happy. At the time he was being interviewed by Voice of America (VOA). The host even said, Over the past 23 years, this is the first Minister of Justice from Taiwan that is allowed to enter the White House.

Have the official images perhaps been purposefully hidden away, as part of an attempt to bow to pressure of China? Or is it merely very difficult to successfully look for events in the archives of official state visits to the White House?

As I am in communications with the Yilan-based "財團法人陳定南教育基金會" (the "Chen Ding-Nan Education Foundation"), here are some links given to me by an assistant of the Foundation:

With regards to pictures of that 9-13 July 2002 state visit, I have received the following reply from the Chen Ding-Nan Education Foundation:

Our Chief Director told me that there should be some photos in Taiwan government but not in USA. Due to the one China policy, they wouldn’t record Taiwanese politician’s visiting officially.

Further more, I have been presented with four pictures through the Foundation documenting the state visit. I have created the following category on Wikimedia Commons, to which I have uploaded the pictures.

In the mean time I have also created an English Wikipedia article on the topic of the state visit, entitled "Republic of China (Taiwan) 9-13 July 2002 state visit to the United States of America".

2
How many times did Robert Creamer visit Obama's White House?
5
Precedent for a sitting President not residing in the White House?
6
Precedents for White House plugging products?
9
Consequences for ethics violations by President and White House staff
5
Is Trump’s barring of select media outlets from White House press conferences a violation of the First Amendment?
1
Have any investigators requested the minutes of Trump's Oval Office meeting?
3
Is there precedent for a foreign government official delivering a statement from the White House and can they do it in the WH briefing room?
3
Can the President of the United States spend private funds on official events in the White House?
2
Where could I find the House of Representatives voting record for the Export Administration Act of 1979?