Were there any “Punch A Nazi” polls done in the US?

The "Punch a Nazi" event in the United States was an interesting phenomena where Richard Spencer (A self titled Identitarian) was punched by an anarchist generating the question "Is it OK to punch a Nazi?". Were there any polls done to evaluate the general attitude surrounding this issue in the US? I see many articles regarding the issue, but no polls asking people whether this action is OK or not, and not their response.

The right-wing Cato Institute did a survey about punching Nazis.

According to the survey, only 32% of the general population say that it is morally acceptable, and even among strong liberals the number is only 51%. Old white people are less likely to approve of punching Nazis than non-white or young people. 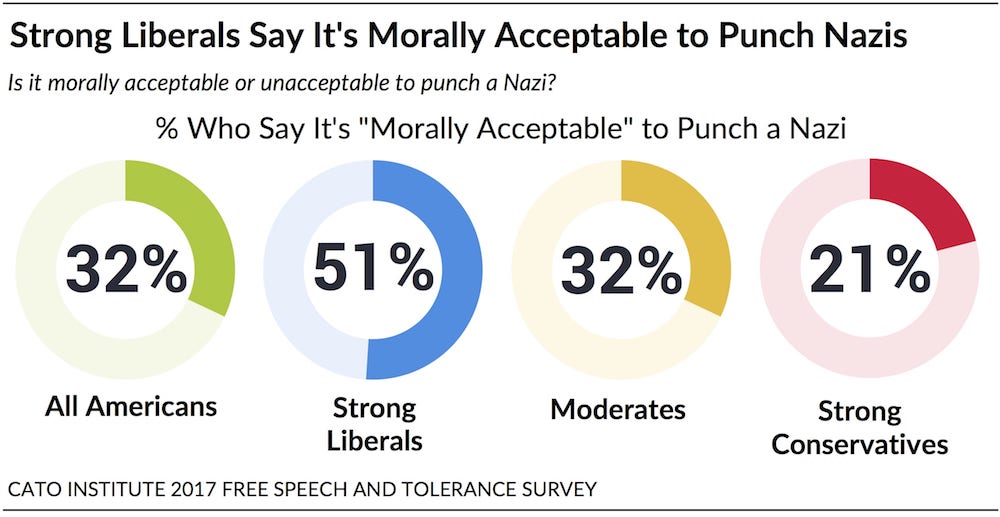 Not the answer you're looking for? Browse other questions tagged united-states freedom-of-speech nazism identity-politics .

33
Were there any U.S. Presidents that were very unpopular when elected?
5
Were there any impact estimations performed before making tariffs changes?
3
Who voted for Arthur J. Jones the neo-Nazi Republican candidate for Illinois's 3rd congressional district?
5
Did the Nazi regime resort to any nationalizations?
6
Are there any public opinion polls in the US on them starting military action against Iran?
2
Why did the US vote against a UN anti-Nazi resolution?
2
Are there any examples of official Nazi glorification in the Ukraine?
11
What are the concrete demands of Germans who want to “put an end to” (Schlussstrich ziehen) nazi commemorations?